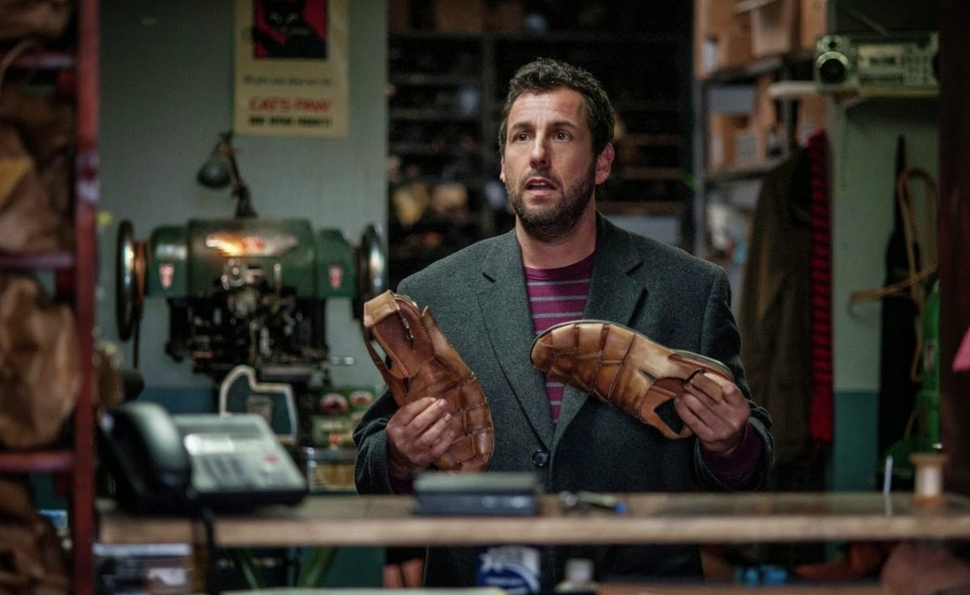 For decades, critics have complained that Adam Sandler was stuck in a rut. We’ve bitched about him pandering to the lowest common denominator with lowbrow romps populated by his friends and directed by a stable of hacks he’s worked with over and over again. We’ve complained about the shameless product placement in his films, his little-boy fantasy of casting his sports heroes, and his habit of making movies for his bros rather than an audience deserving of more than the grayish slop he’s consistently churned out.

At the 2014 Toronto Film Festival, however, these same critics learned to be careful what they wished for. It was as if Sandler finally decided to read his press and work with respected directors like Jason Reitman (who led him to some of the worst reviews of his career in Men, Women & Children) and actor-turned-director  Tom McCarthy, whose winning streak (The Station Agent, The Visitor, Win Win) comes to a crashing halt with The Cobbler.

Though ostensibly a change of pace for Sandler, The Cobbler has the kind of gimmicky, high-concept premise his self-loathing, mercenary character from Funny People would have lustily embraced, then hated himself for making. But if the premise screams “wacky,” the dour, sincere tone suggests the filmmakers genuinely thought they were making a film about embracing destiny and the importance of community, instead of an actual comedy.

The film casts Sandler as Max Simkin, a lonely New Yorker who sulks through his humdrum life as a cobbler. One day, he discovers a magical sole-stitching machine that allows him to slip into the skin of whoever’s shoes he happens to be wearing. This should be a moment of intense delight and whimsy, but the earnest, low-key tone that worked so well in McCarthy’s earlier character studies turns everything gray and dreary. The Cobbler is such a weirdly somber comedy that it would almost be in poor taste to laugh during it, though there’s not much danger of that happening.

There are a million different ways McCarthy could go with this premise, but The Cobbler decides to use it not as a vehicle for either wish-fulfillment or revenge fantasy, but rather as a tool to help Max fight gentrification in a New York block that looks like it hasn’t changed since 1953. In an earlier time, Sandler would organize a team of ragged but talented breakdancers to win the big talent show and save his block; here, he uses his ability to look like his customers to achieve his boring objectives.

The idea of Sandler becoming a slew of other people, as long as they wear size 10 1/2 shoes, is similarly rife with comedic possibilities, but mainly results in a character played by Method Man half-heartedly attempting to adopt Sandler’s signature mannerisms, and then wisely abandoning the pursuit early on. Handsome Dan Stevens is another body Max embodies after putting on his shoes, but the film can’t think of much to do with this subplot, other than have Sandler/Stevens awkwardly demur when a sexy woman invites him into a shower that would require him taking off his shoes.

This magical phenomenon brings Max no joy, and Sandler mopes his way through a painfully earnest performance that’s dour and lethargic enough to inspire nostalgia for earlier vehicles where he made goofy faces, did wacky voices, and generally behaved like the world’s most indulged overgrown 12-year-old. If The Cobbler represents growing up for Sandler, then there’s something to be said for suspended adolescence. There’s nothing wrong with a popular funny man wanting to branch out and combine drama with comedy, but the end result should ideally contain even trace elements of comedy or drama. It should preferably contain both. The Cobbler contains neither.