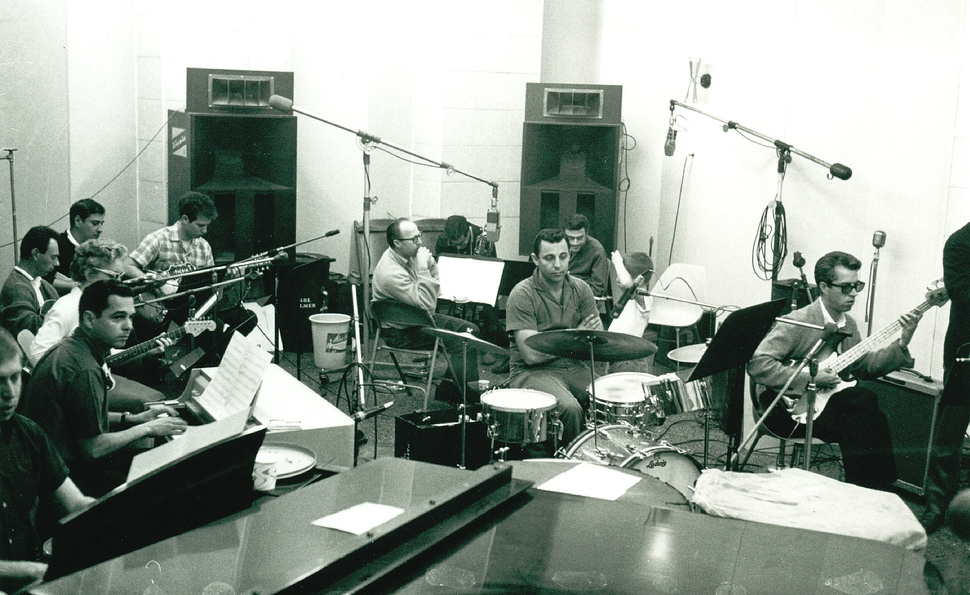 The first wave of rock ‘n’ roll acts emerged from regional country-and-western and rhythm-and-blues scenes, but by the late 1950s, after rock became the new pop, the music’s bases of operation migrated to America’s preexisting show-business centers, New York and Los Angeles. And once rock slipped into the industry machine, the record companies fell back on what they knew how to do, using teams of graphic designers, stylists, songwriters, and studio musicians to support their young stars. But because rock’s teenage audience demanded a rougher sound than what the major labels were used to producing, labels looked for session players who were versatile, collaborative, hip, and able to work a groove as tightly as any veteran bar band.

Danny Tedesco’s documentary The Wrecking Crew is the story of that loose conglomeration of session men (and one woman, bassist Carol Kaye). The film belongs to the short-but-strong tradition of “introducing the musicians behind the musicians” docs, like Standing In The Shadows Of Motown and 20 Feet From Stardom. Tedesco’s movie—begun in 1996 and completed and launched on the festival circuit in 2008—falls between those two on the timeline, though it’s just now getting a theatrical release. Here’s how long ago The Wrecking Crew was shot: Not only does it feature an interview with the late Dick Clark, it has a vibrant, lucid, pre-stroke Clark. It took years (and a Kickstarter campaign) for the movie’s producers to get the rights to some of the most popular songs of the 1960s, and without those songs, The Wrecking Crew would be pointless.

20 Feet From Stardom’s success (and Best Documentary Feature Oscar win) may have something to do with why The Wrecking Crew is getting its belated shot, music intact. Fans of the pre-acid-rock era of California rock should appreciate the persistence of Tedesco and company. While this is hardly a formally groundbreaking documentary, it does tell the story of these musicians well: how they usurped an older generation that refused to play rock ‘n’ roll; how they worked around the clock because they knew the first time they turned down an assignment might be the last time their phones would ring; how they made millions but received no credit for riffs and fills that became classics in and of themselves; and how they struggled to get work once rock became more artist-driven.

Tedesco is the son of one of The Wrecking Crew’s most successful guitarists, Tommy Tedesco, who died before the documentary wrapped. The director provides his own first-person narration to The Wrecking Crew, and periodically offers some warm personal reminiscences of his dad. But for the most part, he used his family connections to gain access to the major players from the L.A. studio system, and from some of the singers and producers they backed. Tedesco talks to Brian Wilson and Cher about how they embraced The Wrecking Crew, and has interviews with Leon Russell and Glen Campbell, who made the leap from session musicians to solo artists. Largely eschewing generalities, the interviewees in The Wrecking Crew explain exactly what was special about working with Wilson on The Beach Boys’ Pet Sounds (where he spent months getting them to improvise around a theme until he heard the sound he was looking for) or Phil Spector (who called for take after take in order to get the band to sound a little exhausted), or how they’d sometimes record musical parts so complex that bands like Gary Lewis & The Playboys had a hard time playing them on tour.

It’s these anecdotes, illustrated by snippets of the original songs, that make The Wrecking Crew so valuable. But it’s more than an amusing bit of trivia to learn, for example, that the famous kick-drum intro from Herb Alpert’s “A Taste Of Honey” was just a way to count the rest of the band into the number. Tedesco doesn’t go so far as to say that his father’s colleagues were the real geniuses behind 1960s rock and pop, but his movie does raise the question of whether The Byrds deserve all the credit for inventing folk-rock with their hit single “Mr. Tambourine Man,” when only the band’s Roger McGuinn played on the record. The Wrecking Crew is a provocative look back at an art form in transition, reflecting on the moment when it started to matter whether Mickey Dolenz was actually playing drums on The Monkees’ albums, and the moment when, according to Dolenz, people started to “take the rock ’n’ roll very seriously.”