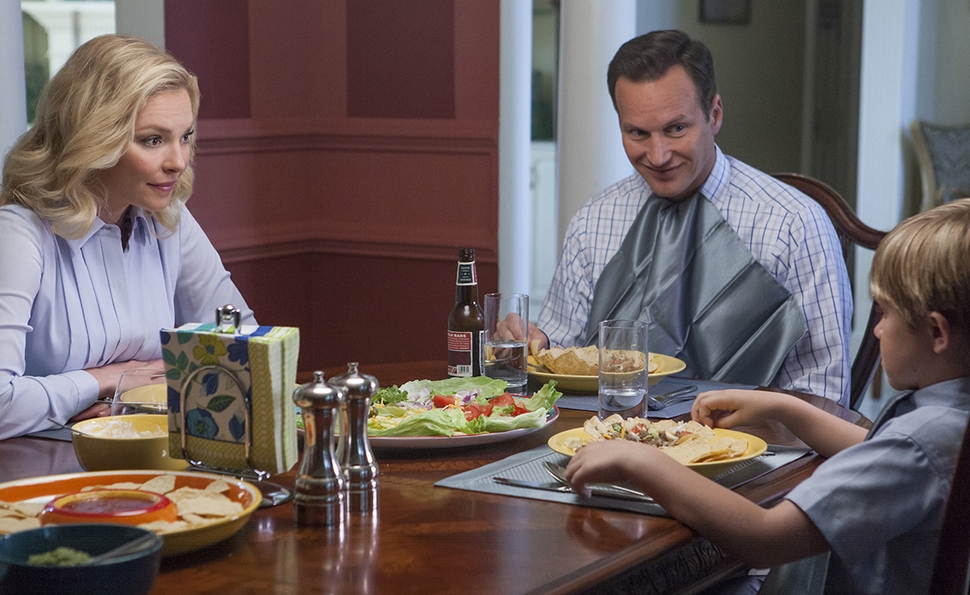 Home Sweet Hell doesn’t get better than its cleverly constructed opening, in which the camera lingers on dopey, blissed-out Don Champagne (Patrick Wilson), vaguely smiling at his kitchen counter, only to be interrupted by his well-heeled wife Mona (Katherine Heigl). Mona looks peaceful, too, and the Champagnes seem happy and well-adjusted—until Mona notices a utensil out of place, and forcefully rearranges her apparently untidy knife block. Don doesn’t look surprised by Mona’s behavior, but he does look afraid.

The Champagnes aren’t actually happy—Don really is afraid, and Mona really is bonkers, and although all that is telegraphed in mere seconds, Burns’ film never satisfyingly expands upon what it reveals during the film’s opening. Instead, Home Sweet Hell goes both broad and dark, refusing to shade any of its characters and situations beyond just “afraid” or “insane.” Although the film appears to be aiming for pitch-black humor, it’s all so mirthless that the result is genuinely ugly.

Mona is conceived as a ball-busting bitch who only takes actual pleasure in her “Goal Book,” a massive scrapbook/vision board she refers to with the kind of reverence normally ascribed to holy text. Mona has big plans for the family—a new house, an expanded business for furniture-store-owner Don, sex on a monthly basis—but all Don wants is to get laid. (Home Sweet Hell’s women are bitches or skanks, but at least that’s twice the variety offered in its men, who are all driven by their wanton desires, no matter how inappropriate they are.) Don’s wife will only put out in accordance with her Goal Book schedule, so when alluring new employee Dusty (Jordana Brewster, who makes the most of her limited screen time) starts working at Champagne Furniture And Rugs, it’s only a matter of time before they use said furniture and rugs for extracurricular pursuits.

Dusty is a plucky go-getter, even without a Goal Book to organize her ideas, so when her affair with Don maybe-possibly results in pregnancy, she uses it to bilk him out of cash and pride. It’s never clear what Dusty’s endgame is, and although she’s forced to push Don for money by her own boyfriend (A.J. Buckley) and his creepy best friend (Kevin McKidd, whose entire character arc is built on how hard it is for people to understand his Scottish accent), Brewster’s solid performance indicates that she might actually be bothered by what comes next.

No one else is, however. Once Mona finds out what’s going on, she demands Don kill Dusty. The emasculated Don can’t quite seal the deal, however, and as Brewster exits the feature, Heigl is right there to pick up the slack. Mona takes great pleasure in killing, and Heigl lights up when it comes time to bash Dusty’s head in and dismember the body. The loosest Mona gets is when she’s killing people, and Heigl appears to relish the freedom afforded to her by her wholly unrepentant role.

Wilson, a capable comic actor, is mostly wasted here, and his performance vacillates between “horrified” and “horny.” Curiously, Wilson has already starred in one “Hey, let’s kill somebody” comedy within the last year: Scott Foley’s mostly unseen 2014 comedy Let’s Kill Ward’s Wife. In that film, Wilson assumed the Heigl role, gleefully helping dispatch a pal’s shrewish wife and hacking up her body with the kind of spirit and tenacity most movie murderers sorely lack. For those specifically hoping to watch Wilson off someone onscreen this year, perhaps that’s the feature to seek out, because Home Sweet Hell is simply too hellish to endure.