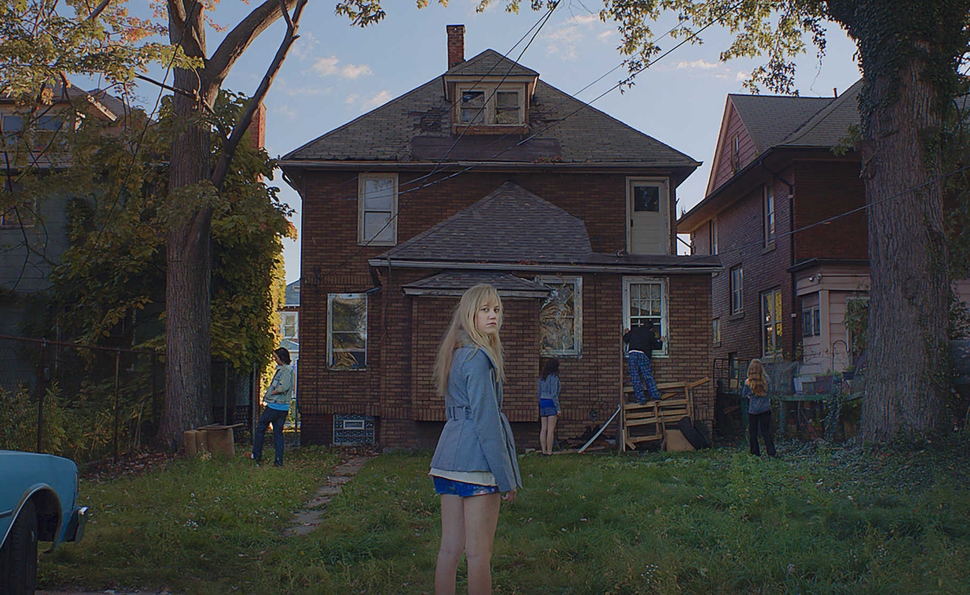 One of the most terrifying moments in It Follows, the best American horror film since The Blair Witch Project, tracks a group of teenagers into a high school, where they’re trying to investigate the origins of a being that’s relentlessly tracking one of them. As the eerie, discordant soundtrack swells in anticipation, the camera does a slow, 720-degree pan around the hallway, through the window leading to the campus grounds, and back again. Nothing is there. The kids get the information they need and leave. The pit in viewers’ stomachs grows deeper. The creature could have been in the shot—it’s certainly out there somewhere—but writer-director David Robert Mitchell lets that expectation go unsatisfied. He’s not interested in stock horror confrontations. He’s interested in freaking viewers the fuck out.

There’s no way to describe the premise of It Follows without making it sound like the dumbest gimmick foisted on horror audiences since the Final Destination franchise, but here goes. The “it” in It Follows is a zombie-like menace that can take any form and targets one person without stopping; nobody else can see it—nobody, that is, except for past targets, who “pass” the problem onto another person via sexual contact. But if the new focus victim is killed, the creature goes back to following the previous target. Happily, this story is less ridiculous in practice than it looks on the page. Maika Monroe stars as Jay, a teenager who’s dating a 21-year-old (Jake Weary) from another town. When she finally acquiesces to sex with him, Jay is confronted by the “it” that’s been making him act in such a mysterious way. Along with her friends and siblings, Jay tries to figure out how to stop it—if, indeed, it can be stopped.

There’s a big honking metaphor here about the sexual terrors of adolescence that synchs well with Mitchell’s fine debut feature, The Myth Of The American Sleepover, a loose-limbed slice-of-life set among teenagers in early-1990s suburban Detroit. In fact, if the scares were removed, It Follows could be a remake of the earlier film, with the same low-key humor and insight into the mini-dramas and group dynamics of uncertain kids. Instead, Mitchell’s deft handling of the relationships in It Follows gets threaded into an ingenious and exceedingly skillful creepshow; Jay and company are not the typical horny teens on the run, but complex and often witty people whose secret desires and fears are forced to the surface.

Nothing in The Myth Of The American Sleepover, however, hints at the technical bravado Mitchell brings to It Follows. The pan within the walls of the high school is just part of a visual strategy that combines distance with surveillance, a sense of something ominous happening elsewhere, independent of the action. That profoundly destabilizing effect is underlined brilliantly by Rich Vreeland’s score, which combines a John Carpenter-esque synth simplicity with a harsh, aggressive ambience that asserts itself in key moments. Once the menace in It Follows appears, there’s just no shaking it, even when the characters hop in a car and drive as far as the water’s edge just to bide time. Mitchell makes the idea of it ever-present, whether it can be seen or not, and the goosebumps just linger on the arm.

In the case of Fast Zombie vs. Slow Zombie, It Follows gives a persuasive closing argument for the latter, even though it’s only a zombie movie via technicality. Speed doesn’t matter in the film—“it” can be escaped fairly easily, provided that the exits aren’t closed off—but persistence does; no matter how far targets go, they’ll never stop being targets. In that, It Follows suggests the inevitable threat of death itself, which shuffles slowly toward everyone with inexorable purpose, and will get in their heads in the meantime. The characters are allowed to pass “it” on to someone else, but sooner or later, it’ll come for them, too. It’ll come for all of us.