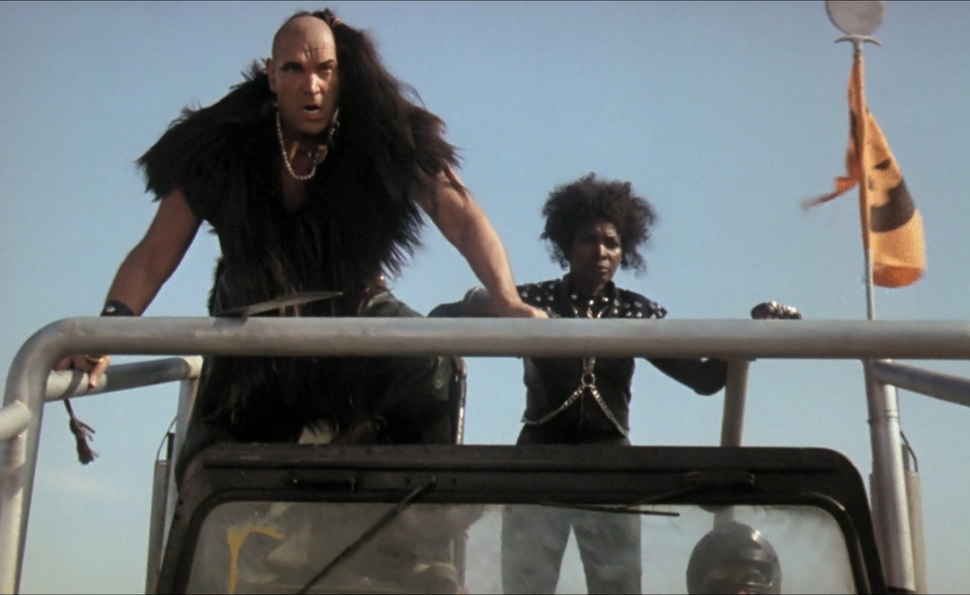 Exterminators Of The Year 3000

When Mad Max: Fury Road comes out in May 2015, it’ll cap what’s become a mini-wave of 1980s-style post-apocalyptica. Lately, film-festival midnight-movie programs have been littered with micro-budget, tongue-in-cheek throwbacks to the golden age of rowdy road pictures, set in dusty landscapes, populated by gruff men and women clad in studded leather. Some of these homages are “better” than their source material, if only because they’re self-aware. (Even their lapses tend to be intentional.) But they’re also too far removed from the original Road Warrior era to capture what those old movies were really all about.

Exterminators Of The Year 3000 is about as 1980s as a cheaply made science-fiction action picture can get. Shot in Italy and Spain by director Giuliano Carnimeo (under the name “Jules Harrison”), the 1983 film scatters an international cast of fashion models and character actors across a barren future Earth, where water supplies are dwindling. Calvin Klein model Robert Iannucci (under the name “Robert Jannucci”) plays Alien, a bearded rogue who stays away from the struggling underground civilization, but also dodges the band of surface-dwelling ravagers led by Crazy Bull (Fernando Bilbao), and instead lives by his wits, with the occasional help of sexy fellow nomad Trash (Alicia Moro). When Alien starts taking care of lost cyborg child Tommy (Luca Venantini), he develops a sense of responsibility for the first time in years.

Exterminators Of The Year 3000 is mostly a mediocre Road Warrior copy, with a few genuinely exciting chases punctuating long stretches that range from tedious to terrible. On Shout! Factory’s new Blu-ray, Iannucci explains that even though the movie’s writers and director had limited command of English, they wouldn’t let the actors change their lines to make them sound more like things human beings would say. So Exterminators sports a lot of dialogue like, “Once more into the breach, you mother-grabbers!” and, “In this shit of a world, barbarians have to be around.”

Then again, if the script weren’t so lousy, Exterminators Of The Year 3000 would be a lot less entertaining. Roughly a third of the movie’s appeal derives from its cheesiness. Another third comes some of the more eye-popping stunts, like a sequence where Alien and Trash run a gauntlet of cool-looking death-traps. Whatever its other failings, never let it be said that Exterminators overestimates the fun of watching chunks of an exploded car fall to the ground in super-slow motion.

The rest of what makes Exterminators Of The Year 3000 watchable is its dogged adherence to its era’s trends. From the subterranean cities to the tricked-out vehicles racing through flatlands, Exterminators is a compendium of what B-movie producers thought was nifty and/or potentially popular in the early 1980s. The wonder of knockoffs is that they codify the quirks of whatever they’re imitating, which in this case means a movie about a future Earth dominated not just by scarcity, but by marauding gangs who dress like extras from a heavy-metal video. In the Mad Max movies, this premise had sociopolitical connotations, and shaped a hero with a tragic backstory. In Exterminators, Alien has no real character arc. The breakdown of society is just another occasion for violence. In the end, it’s not that the movie is “so bad it’s good,” so much as that it’s so derivative, it’s fascinating.

Shout! Factory’s Blu-ray contains an interview with Iannucci, and an Iannucci commentary track. The latter is a lot more fun, because he’s being prompted throughout by pulp cinema expert Bill Olsen, who gets the actor to loosen up and share stories about the fantastic catering on Italian productions, and what it was like to work to work in a cast where nearly all of the leads spoke different languages. In both bonus features, Iannucci sounds a little confused as to why anyone would be interested in a film that was barely released, and he actually expresses relief when Olsen tells him that Exterminators Of The Year 3000 isn’t very well regarded by genre aficionados. Depending on how much viewers enjoyed the movie, Iannucci’s indifference is either a big buzzkill, or a moment of welcome sanity.