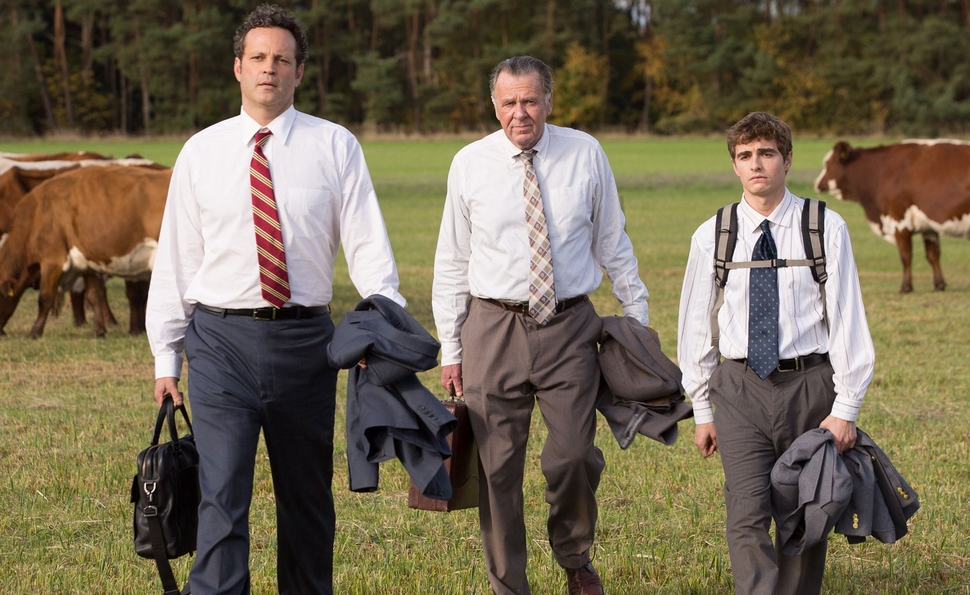 The biggest surprise of the dreadful buddy comedy Unfinished Business is that despite being presented as the mash-up of Wedding Crashers, Jerry Maguire, Old School, and Eurotrip that no one wanted, the film is actually more of a mix of comedy and drama than a flat-out comedy. The second biggest surprise is that, as much as this listless, dire, exhausting film can be said to have any focus at all, it’s far more focused on its dramatic elements than its comic ones. It’s as if the actors kept asking for more and more “emotional” elements to be added to the script—familial drama, financial crises, a toxic marriage, a chubby kid at home being cyber-bullied, lifetimes of disappointment and unrealized dreams—to the point that by the end, the film can be deemed a comedy only in the most charitable sense.

Unfinished Business at least can’t be accused of raising overly high expectations. It begins with a scene that’s less a riff on Jerry Maguire than a bald-faced imitation of the opening of Cameron Crowe’s energetic crowd-pleaser. The movie begins with sad-faced Dan Trunkman (Vince Vaughn) learning that his evil, power-mad (read: female and attractive) boss Chuck Portnoy (Sienna Miller) is rewarding him for his hard work and dedication with a 5 percent pay cut. Unlike Chuck, who dismisses Dan’s talk of having to provide for his family as sentimental nonsense, Dan has to answer to something other than his overriding ambition. So in what is less a fit of righteous rage and more a grumpy tantrum, Dan quits semi-dramatically and invites his coworkers to join him in a new business.

Since Vince Vaughn’s breakthrough role in Swingers, his signature as an actor has been a manic energy that at its highest registers veers into obnoxiousness. So it’s not an encouraging sign that the character Vaughn plays here appears on the verge of tears throughout the film. As shrill and annoying as Vaughn can be in high gear, a mopey, emo Vaughn is not an improvement. Given the air of sadness and discouragement Dan carries around him like a black cloud, it’s not surprising that no one jumps at the chance to join forces with this defeated loser. Yet he ends up accidentally gaining two employees all the same: Timothy McWinters (Tom Wilkinson), an old-timer forced to leave the company after hitting an arbitrary age limit, and the comically named Mike Pancake (Dave Franco), whom Dan mistakes for an employee of his old company, though he was actually just interviewing there for a job he didn’t get.

Flash forward a year. Even though these three random dudes have ostensibly been working together intimately for 12 months on a shared dream, they barely seem to know each other. Dan doesn’t appear to realize that Mike isn’t just suspiciously oblivious and naïve, but genuinely mentally challenged. Still, the film adopts such a strangely earnest, lumbering tone that it’s possible director Ken Scott and screenwriter Steven Conrad thought they were making a compassionate drama about the plight of the mentally challenged, and not just a bunch of dumb-guy jokes that all land with a resounding thud, in spite of Franco’s exceedingly game performance.

Things are dire for these lost men, until a sliver of hope appears in the form of a lucrative deal that could save the company—but only if Dan and his mismatched acquaintances (it would be overly generous to call them buddies, just as it’s overly generous to call Unfinished Business a buddy comedy) can close the all-important “handshake” finalizing the deal. This pursuit first takes them from their hometown of St. Louis to Portland, Maine, and then to Germany, where the upstart businessmen are mortified to learn that they will be squaring off against their old company and Chuck—who, as an evil, childless, single woman, can manipulate men with her sexuality, instead of constantly thinking about the needs of her suffering children, like family man Dan.

Debauched hijinks ostensibly ensue: smoking pot with kids at a hostel, doing shots with Japanese businessman, and a lot of other shenanigans audiences might remember from such films as The Wedding Ringer, Think Like A Man 2, Last Vegas, and many of the other raunchy comedies made since The Hangover. Unfinished Business aspires to high-spirited antics, but it feels defeated and exhausted from the very start. It’s as if someone decided to film a standard Hangover knock-off script as the kind of painfully sincere, dour exploration of shattered dreams and squandered expectations that fills Sundance’s lineup every year. Not even Wilkinson is able to transcend this sour, inadvertently sad little mess. His character exists solely to complain about his desire to divorce his morbidly obese, vending-machine-shaped, never-seen wife, and have mildly exotic sex with women he is not betrothed to. Like Franco, he gives it his all, but it’s a losing endeavor.

Glacially paced and devoid of laughs and life, Unfinished Business makes audiences sit through an entire film for the opportunity to see Vaughn trade in his permanent frown for the cocky grin that seems to come effortlessly in his other, better movies. Like everything else in this incongruous downer of a would-be comedy, it’s not worth the wait.