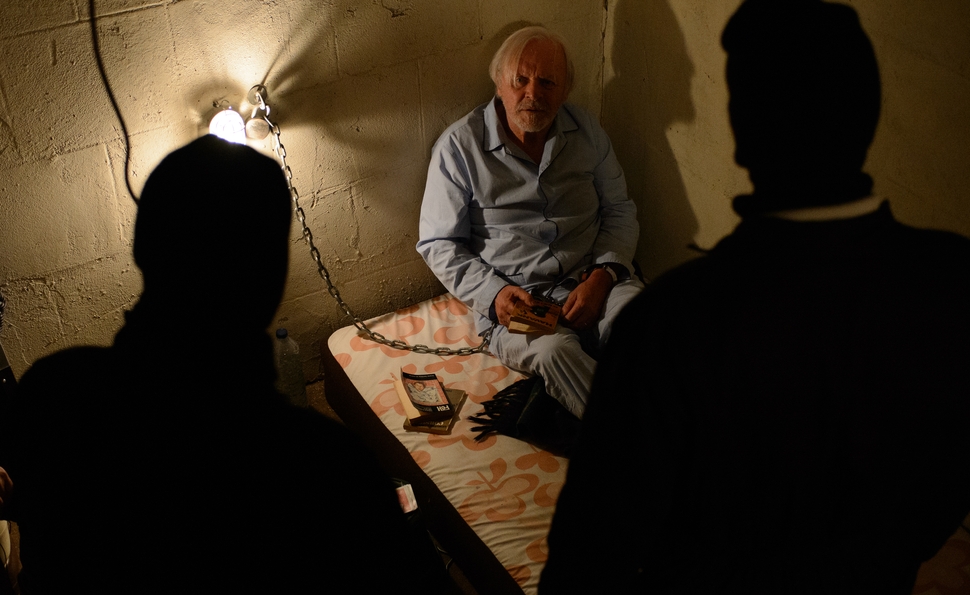 Kidnapping Mr. Heineken opens with the title character in a position of power, even though he’s been kidnapped by a desperate group of young man in dire need of money. Anthony Hopkins plays Heineken as cool, calm, and collected. He seems to assume that if he maintains an air of civility, if he listens to soothing music and talks in a respectful tone, his captors will follow his lead. So he’s genial and pleasant where his captors are panic-stricken from the very start.

This opening sequence sets up expectations that are never fulfilled. For starters, it makes the film look like a proper Hopkins vehicle where a captive yet powerful man plays devilish head-games with people deluded enough to think they have power over him. It’s immediately reminiscent of Hopkins’ career-defining performance in The Silence Of The Lambs, where even under heavy restraints, he seemed like a deadly threat to everyone within the same zip code.

Alas, Hopkins disappears for the next half-hour so the film can focus on the real meat of the story: the much less compelling narrative of how a group of friends became so frustrated with their inability to raise money the legal way that they turn to lives of crime. When their bank loan is rejected because their primary collateral is a co-op overrun by squatters, these frustrated gents take to robbing banks. When that fails to raise sufficient capital, they turn to kidnapping the heir to the Heineken beer fortune and his luckless driver.

Much of Kidnapping Mr. Heineken’s running time is devoted to the lead-up to the kidnapping, like building a secret room to hide Heineken, and setting up the apparatus for what was to be the largest ransom for any kidnapping at the time. But after acquiring their prey, these sweaty, cash-strapped men (whose numbers include Sam Worthington, who somehow managed to star in Avatar, the most successful movie of all time, without graduating out of thankless supporting roles in mediocrities like this) are horrified to discover that no one is in a hurry to get Heineken back. After weeks go by without the ransom getting paid, Kidnapping Mr. Heineken threatens to turn into yet another variation on O. Henry’s “The Ransom Of Red Chief,” where horrified kidnappers learn they’ve nabbed someone so obnoxious that the people who should be paying his ransom are relieved to have him gone.

But as played with quiet gravity and slowly mounting impatience, Hopkins’ Heineken isn’t shrill or obnoxious. He’s simply a cultivated man of privilege waiting out a dreadful situation because that’s his only option. So Kidnapping Mr. Heineken isn’t tilted in the direction of dark comedy so much as straight crime procedural. And Hopkins isn’t in it anywhere near as much as he needs to be for the film to be successful.

Kidnapping Mr. Heineken diligently chronicles the true events, but never provides an adequate answer to why this is a story worth telling, though it probably has much to do with the money involved, and the celebrity of the captive. It doesn’t help that the individual captors are mostly indistinguishable, one large mass of yearning greed and miscalculation doomed from the start by their short-sighted inability to see through the consequences of their actions.

Kidnapping Mr. Heineken isn’t a comedy of incompetence, or the psychological battle of wills its opening scene suggests. It’s hard to see what exactly what the filmmakers were going for, beyond bringing a real-life story to the big screen as dutifully and dully as possible. Kidnapping Mr. Heineken begins by invoking the specter of The Silence Of The Lambs. It suffers terribly by comparison, but even without Hopkins in captivity, it would still feel slight to the point of meaninglessness.