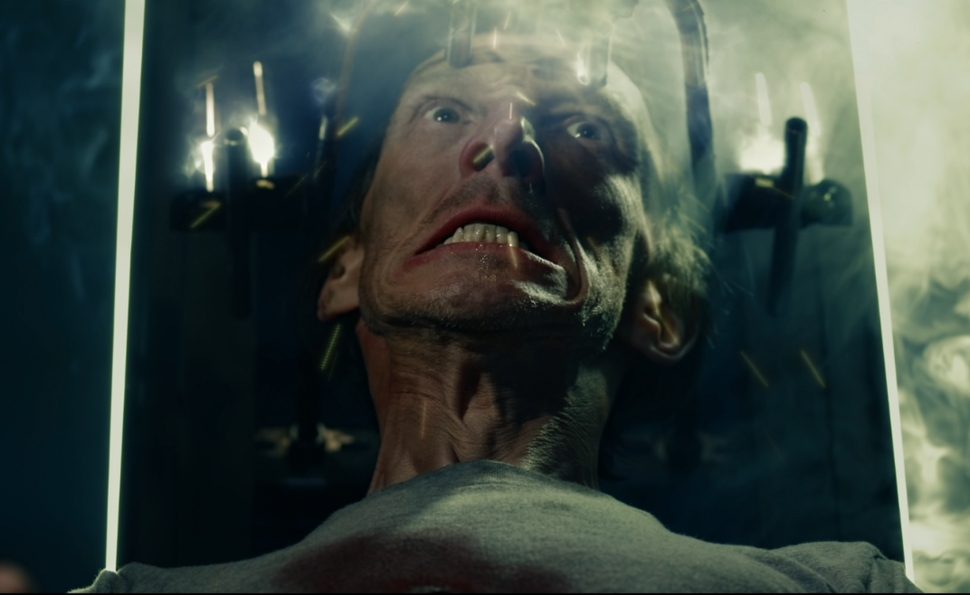 Coming up with a fresh new twist on the zombie picture isn’t an easy feat, particularly in a market so glutted with them that even the Nazi zombies of Dead Snow were something of a shrug. But Tony Burgess, in his screenplay for the Canadian sleeper Pontypool, locked onto the idea of language as an infectious virus, a metaphor built to survive the scares. With Ejecta, which he wrote and Chad Archibald and Matt Wiele directed, Burgess attempts the same trick with the well-trodden alien-invasion subgenre, but the metaphor doesn’t poke through the chaos and noise. Somewhere in this standard-issue, low-budget affair, there’s a statement about the futility of torture, and how torturers wind up strengthening the evil they’re attempting to expel. But getting there involves wading through close-encounters clichés, conspicuously limited production values, and dialogue that lands with a clunk.

With a gaunt, wiry intensity that recalls Jackie Earle Haley, Julian Richings makes the strongest impression as William Cassidy, a rural recluse and blogger who has long claimed that his intense headaches and hallucinations originated with alien abduction. On the eve of the “Carrington Event,” a solar flare that threatens to disrupt the Earth’s rotation, William writes a surprising email to Joe Sullivan (Adam Seybold), an alien enthusiast and filmmaker, asking him to come out with his video camera. Something supernatural happens that night, but Burgess’ script jumps forward to the aftermath, when a secret government organization, led by the abominable Dr. Tobin (Pontypool’s Lisa Houle), goes to extreme lengths to find out what William knows.

The detail about Joe being an amateur filmmaker makes it a dreadful certainty that Ejecta will go the found-footage route, but while there’s some grainy material shot through his lens, the film itself blessedly goes in the other direction. It looks as slick as the low-budget, widescreen John Carpenter productions it’s aping, albeit with a shortage of visual imagination. There’s nothing particularly surprising about the elements at play here: Ejecta is largely a generic horror film about alien possession, built around the interplay between a UFO-kook-who’s-not-really-a-kook and the shadowy government agents eager to suppress or destroy the truth. Its main visceral and political punch comes from Dr. Tobin’s high-tech torture of William to get information out of him, which is drawn out long after the realization that a) he gets enough torment from day to day from the something inside him, and b) the electric shocks and face-punches strengthen rather than diminish him. Burgess’ script has an ingenious structure that leaves the middle of the story blank, but Ejecta doesn’t improve by sketching in that central mystery. In the end, the film isn’t scary and it isn’t all that brainy, either. It’s just a juicy metaphor in search of worthy action to support it.