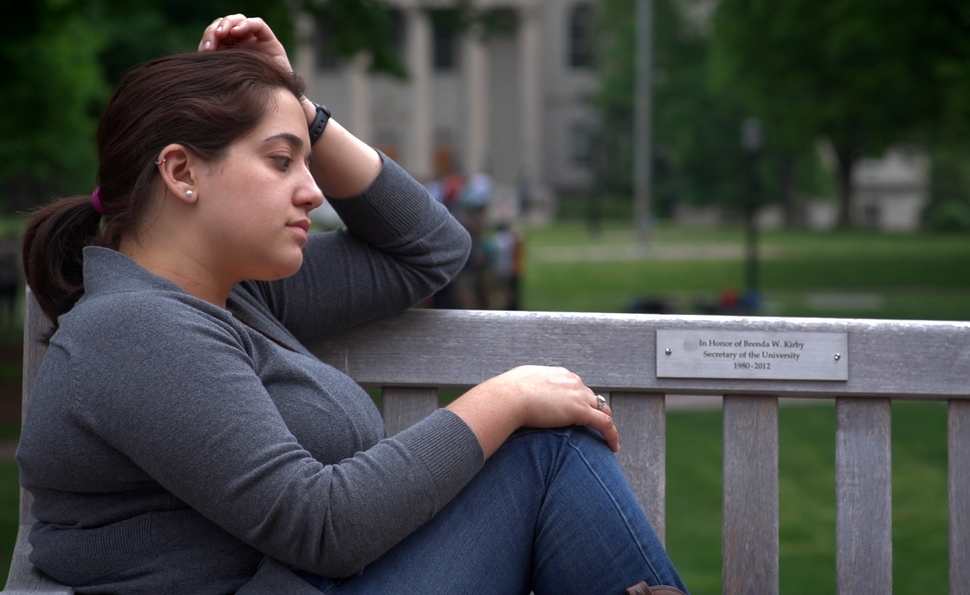 Kirby Dick’s The Hunting Ground, a documentary about rape on college campuses, opens with a montage sequence where various young women react with unfettered joy over being accepted to the college of their choice. And it’s all set to “Pomp And Circumstance,” the graduation march. Though Dick stops short of cutting from there to an abattoir, the sequence has a rhetorical bluntness that even Michael Moore would find too much: These smart, vibrant, hopeful teenagers are headed to a place where nearly one in five women can expect to be sexually assaulted. And should they be among that 16 to 20 percent, the institution they might expect to protect them will actively discourage them from reporting it, and likely make no attempt to expel the perpetrator, even if he’s a serial offender. It’s an outrage, and The Hunting Ground practically trembles with it.

Yet The Hunting Ground is a prime example of the problem with activist documentaries: Sometimes the cause trumps all aesthetic concerns. The “Pomp And Circumstance” sequence is devastatingly effective at carving a sizable hole in the pit of viewers’ stomachs, but it’s a crude tactic, the first in a movie-long effort to marshal support for its agenda. But driving would-be activists to a website is not the same thing as making a great documentary, and Dick struggles to reconcile those two goals—if he had any interest in reconciling them at all. If the purpose of The Hunting Ground is to raise awareness and call viewers to action, then mission accomplished. But the tactics used are often graceless and propagandistic, and take away from the moving testimonials and the on-the-ground organization at the film’s core.

The Hunting Ground is Dick’s third documentary in the past decade about sexual abuse, following 2004’s Twist Of Faith, which profiles a former altar boy who confronts the Catholic Church for protecting the priest who assaulted him as a teenager, and 2012’s The Invisible War, which deals with the epidemic of rape in the armed forces. Here, he finds another situation where enormous institutions are incentivized to suppress or deny the claims of rape victims. Through a series of wrenching interviews, Dick collects story after story of college students—primarily women, but a couple of men, too—who report rapes to campus administrators, only to be questioned or shamed for their behavior, and to witness inaction by the school and authorities in following up their claims. As one subject says, rape presents universities with a PR problem: They don’t want their brand—and their enrollment—affected by reports of rape on campus, or they’ll lose their reputation as “safe” schools for young women to attend. The practical result is that it incentivizes rapists to stalk women without fear of consequence: They can rest easy knowing that few rapes will be reported, and an infinitesimal percentage of those that are will lead to arrests, much less expulsion.

Though Dick makes a wide-ranging argument, he focuses primarily on Andrea Pino and Annie Clark, two rape survivors who band together to found an organization called End Rape On Campus. Their mission is to use the Title IX amendment, a federal law prohibiting gender discrimination in education, to argue that colleges have fostered a hostile environment for women. These Title IX complaints stand to hit schools in the pocketbook, because they risk losing federal funding. Through their connections with survivors on other campuses across the country, Pino and Clark add more harrowing testimony to The Hunting Ground and do their part to help bind the film together.

But while Dick sacrifices affect by considering the issue as broadly as possible—as opposed to the narrow, more personal frame of a film like Twist Of Faith—he cannily tucks the film’s headline-grabber into the final third, for maximum impact. The Hunting Ground’s greatest strength comes from the harrowing stories of women speaking on the record, none more high-profile than Erica Kinsman, who’s coming forward for the first time to talk about her sexual-assault charges against Jameis Winston, a Heisman Trophy-winning quarterback for Florida State University. Kinsman’s story is persuasive, and what’s more, she did everything she needed to do: She reported the crime to the Tallahassee Police Department immediately, and had a rape kit that confirmed (once it was tested, a full year later!) Winston’s DNA, but against the school, against the sports program, and against the fans and alumni and media that prop them up, she never stood a chance.

The scale of Kinsman’s story is unusual, enough to draw the First Take-level media sliming that happens whenever an athlete is accused of rape and the sports-talk troglodytes assume she’s guilty of extortion. But in the context of The Hunting Ground, hers is a common story writ large, one in which a rape survivor is betrayed by a school more interested in protecting its image than protecting its students. The film stokes outrage, sometimes shamelessly, but it’s righteous outrage. Like many subjects here, Kinsman wound up seeing her rapist in class. For his part, Winston is currently expected to be the No. 1 pick in this year’s NFL draft.