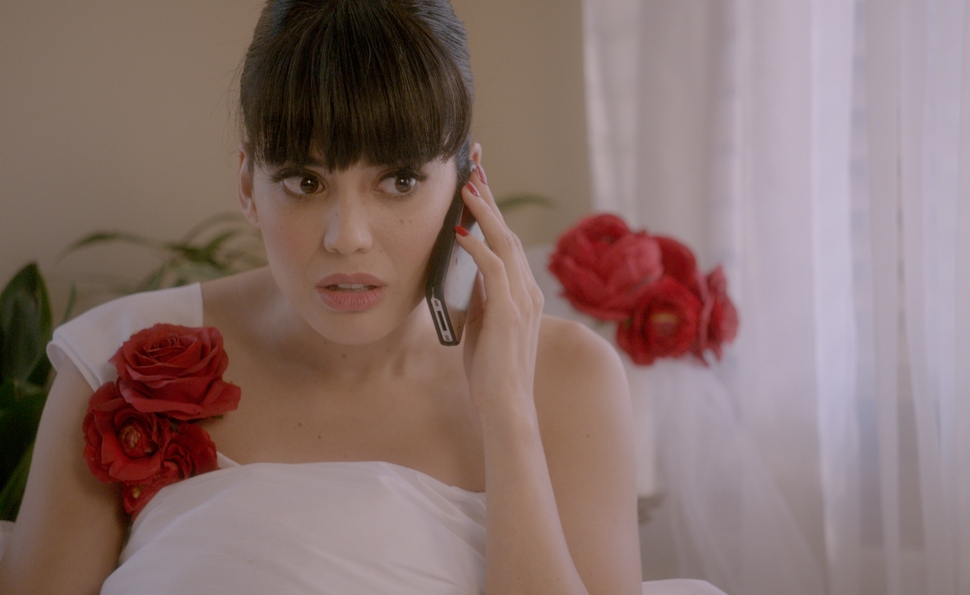 The indie comedy Ana Maria In Novela Land arrives at a time when one of the most talked-about shows on TV is Jane The Virgin, an American adaptation of a Venezuelan telenovela, partially set in the world of telenovelas. The good news for writer-director Georgina Garcia Riedel is that right now, there’s a higher-than-usual awareness of the genre that she and her co-writer Jose Nestor Marquez are spoofing. The bad news is that Jane The Virgin is frequently brilliant and inspired, while Ana Maria In Novela Land is merely clever, and only fitfully.

Edy Ganem stars as Ana Maria, an unemployed young woman still living at home with her working-class parents in East Los Angeles, where she spends most of her time either live-tweeting or writing fan-fiction about her favorite telenovela, Pasión Sin Limites. Ganem also plays the main character on that show, Ariana, who spends most of her time sneaking between lovers in elegant mansions. One night, during a freak lightning strike, Ana Maria and Ariana switch places. Ana Maria takes the change well, because she’s certain that she’s dreaming. She gushes like a fangirl at all her favorite TV characters, while enjoying getting to dress up in pretty clothes and rub up against handsome men. Ariana, on the other hand, takes one look at her new neighborhood and assumes she’s been kidnapped by criminals—because that’s the kind of thing that would happen to her.

Ana Maria In Novela Land is the final film of actress Elizabeth Peña, who plays Ana Maria’s low-key but perpetually worried mother. Though she’s only in a handful of scenes—most of them alongside veteran character actor Nestor Serrano—Peña establishes a baseline of warmth and believability that’s necessary for a movie so broadly comic at times. The major failing of Ana Maria In Novela Land is its unevenness. The comedy is never all that funny, and some scenes fall noticeably flat, either because the cast isn’t strong enough, or because the production as a whole lacks polish. Still, Peña has enough presence to anchor the film even when she’s offscreen.

Ganem also gives a strong performance, in both her roles. She actually keeps her Ana Maria and her Ariana so distinct that it’s not immediately obvious she’s the same actress. And that matters, because as crazy as this movie’s premise is, it’s ultimately about two seemingly different women who learn a lot about what they have in common. Once she realizes she hasn’t been abducted, Ariana’s adjustment to her new life is fairly simple. After a life of maximum drama, Ariana finds she enjoys living simply with a nice family, and helping her new sister Ana Gloria (Mercedes Mason) prepare for a wedding. Ana Maria, on the other hand, tries to bend the world of Pasión Sin Limites to her will, and discovers that fiction isn’t any more hospitable to her than non-fiction. It’s not just that she runs afoul of soap-opera villains like the evil lawyer Schmidt (Luis Guzmán), but also a sense of entitlement and delusions of importance have been her real problem all along.

It’s fairly common—too common—for an indie comedy to explore one immature person’s dawning self-awareness. That’s where Riedel and Marquez’s riffs on telenovela conventions pay off, because they haven’t been in hundreds of other movies. Jane The Virgin’s jokes are sharper, but Ana Maria In Novela Land does spin some mildly amusing bits of business out of the ways both Ana Maria and Ariana are thrown by their surroundings—like how Ana Maria is alarmed to find that her TV mansion has no toilet to puke in, while back in East L.A., Ariana is transfixed by what she assumes is a bowl of whooshing ocean water that her new family keeps in their bathroom.

It doesn’t happen often enough, but this film is at its best when it uses its two main characters’ wildest behavior to explore their mutual self-absorption. When Ariana impulsively slaps people to express her displeasure, or when Ana Maria does an inappropriate dance at a fancy party, those scenes aren’t just played for laughs, but to make the point that even when the world goes topsy-turvy, it doesn’t pay to be inconsiderate to other people. That’s the kind of lesson that it’s easy to imagine Elizabeth Peña delivering, both in character and out—and the kind that can give a hit-and-miss comedy some soul.