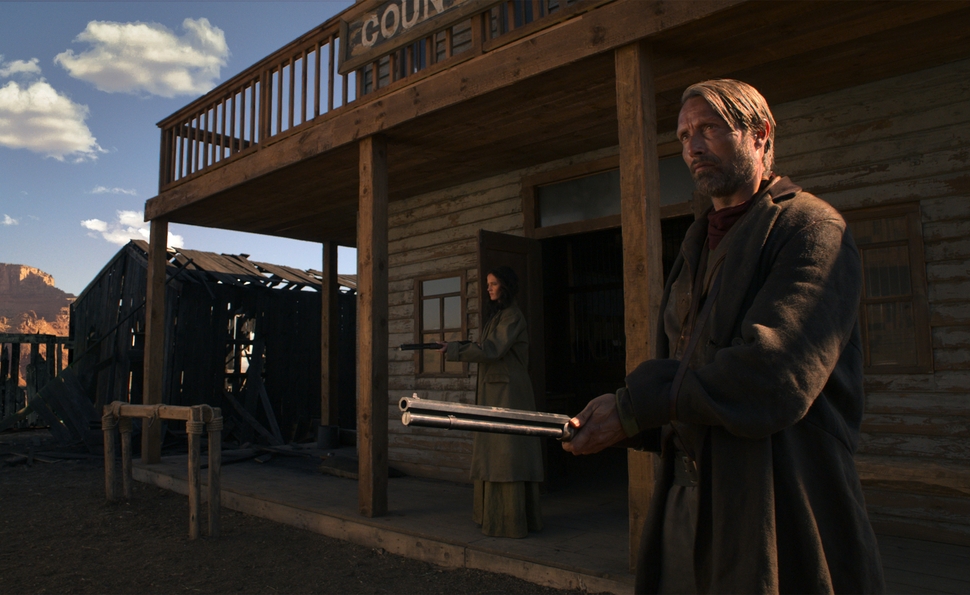 When American moviegoers put the Western out to pasture some decades ago, we created two problems. First, and most obviously, there are virtually no Westerns anymore. Most of us are fine with that, apparently (otherwise demand would spur production), but it’s a real bummer for those who enjoy movie cowboys and wish they were still around. Less noticed and lamented, however, is the corollary problem: Because Westerns are now rare, the few that get made tend to be self-referential and revisionist, commenting on the nature of the genre rather than simply inhabiting it. Those can be great (and very occasionally, we get a masterpiece like Unforgiven that offers the best of both worlds), but it’d be nice every once in a while to see a basic, unpretentious oater of the sort that Hollywood used to churn out every single week. Maybe with a touch of added brutality to reflect contemporary tastes.

As it happens, that’s precisely the appeal of The Salvation, a popcorn-ready Old West revenge tale with little on its mind besides consecutive action beats. Leave it to the Danes: The film was co-written and directed by Kristian Levring (The King Is Alive), one of the founders of the Dogme 95 movement (alongside Lars von Trier, Thomas Vinterberg, and Søren Kragh-Jacobsen), and it stars Mads Mikkelsen in the traditional role of the homesteader—here, a Danish expatriate named Jon—who’s forced to dust off his trusty six-shooter when black-hatted bad guys ruin his life. No sooner have Jon’s wife and young son finally joined him in America, seven years after he left to make his fortune, than they wind up on a stagecoach with a psychopath bent on rape and murder. Jon takes immediate revenge, unaware that the perp’s brother is equally deranged local enforcer Delarue (Jeffrey Dean Morgan), who has the entire nearby town—including its mayor (Jonathan Pryce) and sheriff (Douglas Henshall)—under his thumb.

There isn’t much more to The Salvation than that—a juicy, elemental face-off between good and evil, featuring virtually no gray areas. The sole exception is Delarue’s mistress, Madelaine (Eva Green), a scarred, tongueless woman whose inability to speak in no way hinders her ability to communicate every febrile emotion. Green has been on a roll lately with delectably over-the-top villains, and Madelaine, who’s both victim and femme fatale, provides her with an opportunity to show what a splendid silent-era actor she would have made; she’s well paired with Mikkelsen, who does some first-rate strong ’n’ silent stuff. In the Western’s heyday, nothing here would have seemed remotely exceptional—it would have been thoroughly enjoyed by audiences and completely forgotten by the following week, when something nearly identical replaced it at the local Bijou. Today, it’s a welcome throwback, moving at a brisk clip and allowing its impressive cast to embody some cherished archetypes. Once upon a time, in the days before absolutely everything was required to be part of some godforsaken four-quadrant “brand,” this was what modest, disposable, just-for-fun entertainment looked like. It really isn’t much, but it feels like salvation.