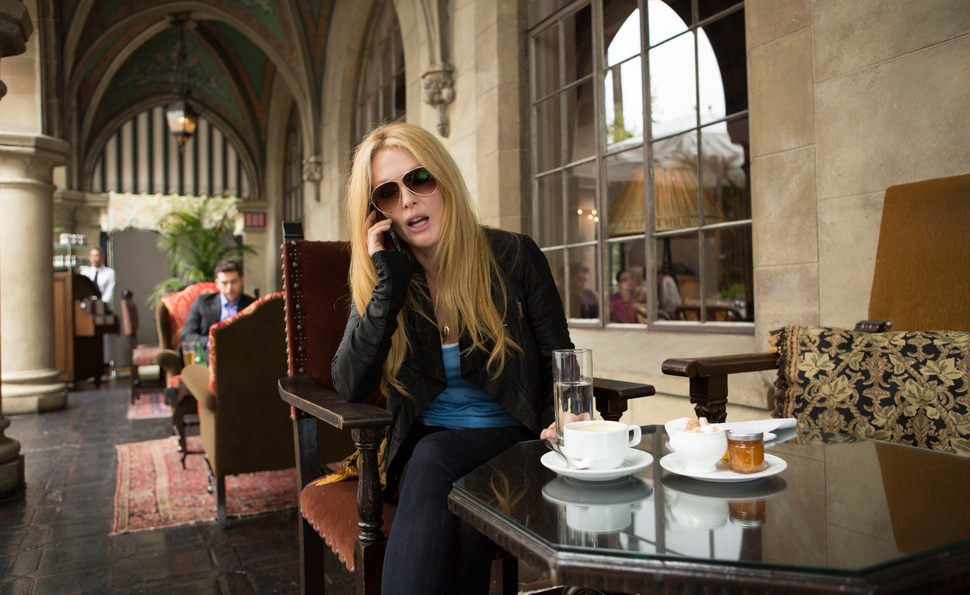 Maps To The Stars

When looking at celebrities who behave awfully, selfishly, and with a degree of insensitivity unthinkable to most people, it’s tempting to believe they’re soulless. But it’s even more horrifying to imagine they’re not. In Maps To The Stars, a curious Hollywood satire from David Cronenberg, Evan Bird plays Benjie Weiss, a star in his early teens whose narcissism has already ballooned to Justin Bieber-esque dimensions. Visiting a fan in the hospital, he mistakes her for an AIDS patient before learning she has non-Hodgkins lymphoma. He then berates his manager for the mistake with a stream of invective that includes ethnic slurs and sexual insults that would shame a mafia don. He has the smirking confidence of someone who knows he’s too valuable to be punished for his bad behavior. But at night, he can’t sleep. The girl, who dies shortly after his visit, haunts him, beckoning him toward a swimming pool. It’s his curse not only to be awful, but to know his own awfulness.

Death assumes many shapes in Maps To The Stars, fire and water chief among them, but punishment always comes in the form of self-awareness. As Havana Segrand, an actor who fears her career may be on the downswing, Julianne Moore embodies the matured form of Benjie’s condition. Desperate to stay relevant—and with senses keenly attuned to pick up on any suggestion that she isn’t—Havana begins the film fighting a losing battle to appear in a remake of Stolen Waters, taking on a role made famous by her (possibly) abusive mother Clarice (played in clips from the film and spectral visits by Sarah Gadon), who died in a fire in the 1970s. Havana also needs a little help, so upon the recommendation of her friend Carrie Fisher (as herself), she hires a new personal assistant (or “chore whore”) Fisher befriended on Twitter, a young, fresh-off-the-bus woman named Agatha (Mia Wasikowska) who wears gloves to hide her badly burned flesh, but can’t conceal the scars that line her profile.

Appearing seemingly out of nowhere, Agatha nonetheless has enough cash to hire limo driver (and aspiring actor and screenwriter) Jerome Fontana (Robert Pattinson) to drive her around L.A. when she first arrives. She then scares him off with spooky talk of a cosmic story she’s writing and/or believes herself to be living. In the context of the film, however, Agatha seems one of the more stable characters, particularly when compared to Benjie’s parents Christina (Olivia Williams) and Stafford (John Cusack)—the former an obsessive stage mother, the latter some combination of guru and therapist, both seemingly on the verge of a nervous breakdown.

Maps To The Stars makes Hollywood seem like a big small town from the start, with its characters’ overlapping trajectories and the way the business makes it professionally necessary for everyone to know everyone else, and to at least keep up the appearance of cordiality. As the film progresses and its connections become even clearer, Maps To The Stars reveals itself as the modern descendant of a Jacobean revenge tragedy, with Hollywood starting to look smaller still.

With the exception of eXistenZ in 1999, Cronenberg has long focused on merging his sensibility with that of other writers, often with great success, even when his established sensibility doesn’t seem like a natural fit with the material. Much of the power of A History Of Violence, for instance, comes from the charged contrast between the hotblooded material and the remove with which Cronenberg realizes it. As welcome as it is to see L.A. through the cool distance of Cronenberg’s camera, that distance seems too pronounced at times in Maps To The Stars. Some of the gags Bruce Wagner’s script lands about the business of Hollywood and the insanity it breeds call out for rimshots that Cronenberg never supplies. The silence can be awkward, but it’s just as often fascinating. Moore has seldom been this unrestrained in a movie, and Cronenberg’s approach affords her ample space in which to lose her mind onscreen, as if channeling every hateful, fragile person she’d ever encountered in her profession. There’s a glibness to some of the film’s gags. Moore’s scenes scrape it away to find the viscera underneath.

Not everyone is as lucky, and the film varies wildly from scene to scene—a ghost story here, an exploration of teens behaving badly there—until it settles on a tone of high seriousness that seems more like an act of resignation than a satisfying conclusion to what’s come before. Yet Maps To The Stars is never less than queasily compelling, and while some of its jabs feel like the sort of look-how-naughty self-flagellation that’s been the default mode of Hollywood satires since The Player, Cronenberg’s film is ultimately uglier and less forgiving than the sort of movie the town usually makes when it turns its camera on itself. Flesh gets scarred here, and lives dragged under. Those who survive to tell the tale find their sleep troubled, and death always pulling them back from the shallows and into the deep.