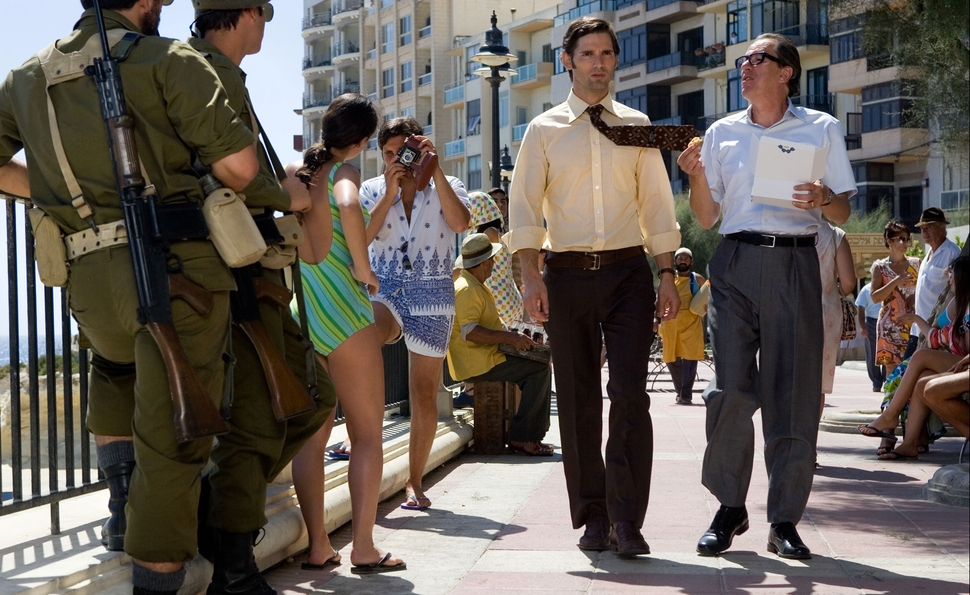 The 2005 historical drama Munich begins in its title city, at the 1972 Olympics, where a terrorist organization called Black September held a group of Israeli athletes hostage, and later killed them, to call attention to the Palestinian cause. But title aside, the movie isn’t really about Munich. It’s more about how quickly the Israeli response to the Olympic massacre evolved into something else. Director Steven Spielberg and co-screenwriters Tony Kushner and Eric Roth don’t shy away from the horror of what happened, or how much of an impact it had worldwide. Much of the event is filtered through ABC Sports’ coverage, and the voice of broadcaster Jim McKay talking about how “our worst fears have been realized” and asking of a masked gunman, “What’s going on inside that head and that mind?” But once that context has been established—that this was an unimaginable crime, committed by inhuman monsters—Munich moves on to fresher kills, increasingly unrelated to what happened in 1972.

Spielberg made war movies and “mission” movies before Munich, but he’d never made a movie in this particular genre: the hard-hitting political thriller. Munich stars Eric Bana as Avner Kaufman, a Mossad agent who gets put in charge of a covert task force, and given a list of 11 people implicated in planning the Munich attack. On Avner’s first day on the job, he arrives in a suit, and cooks a big dinner for his men: a toymaker-turned-bomb-maker (Mathieu Kassovitz), an antique dealer and master forger (Hanns Zischler), a cool strategist and logistician (Ciarán Hinds), and a righteous brute (Daniel Craig). But as they take out their targets one by one, the assassins cause more and more collateral damage, and end up working with the kind of shady sources and suppliers who are willing to make deals with off-the-books government operatives. By the end of the film, Avner has become disheveled and paranoid, and the collegial spirit the team once shared has been broken.

Munich establishes the direction of its story in its first big assassination scene, when Avner fumbles with his weapon while asking his victim, “Do you know why we’re here?” The gunmen get no answer, but shoot anyway, and immediately realize it’s not going to be that easy to kill people—and not that satisfying, either. With each new hit, they research the people they’re going after, and find that they look and behave like ordinary folks, with families and jobs. Worse, as their own campaign stretches on for months, the Palestinians replace their slain leaders with more hard-liners, who strike back against Israelis in general and Avner’s team individually. At first internally and then openly, Avner begins to question the mission-creep, realizing that what was supposed to be a short to-do list could easily take the rest of his life.

Spielberg met with criticism over what some critics and commentators saw as Munich’s sense of equivalency, comparing targeted military operations to indiscriminate terrorist acts meant to slaughter civilians and create a wider unrest. A closing shot of the World Trade Center towers seems to support that reading of the film: that it means to connect the dots between the post-Olympic retaliation, 9/11, and everything that’s come since. But Munich is really more concerned with Avner than with global cause-and-effect. It’s very similar in that way to Clint Eastwood’s American Sniper, which also looks at how one deadly assignment after another affects a man’s psyche. The big difference between Munich and American Sniper—beyond Spielberg and Eastwood having very different cinematic styles—is that Bana’s Avner acknowledges his war-weariness, while Bradley Cooper’s Chris Kyle carries it more stoically.

Munich has also taken knocks for some heavy-handed touches, including an awkward sex scene meant to underscore Avner’s post-traumatic stress, and several conversations that bump the film’s themes up from subtext to text. But skilled playwright Kushner keeps the dialogue lively and colorful, particularly in the interactions Avner has with a pair of amoral criminals, played by Mathieu Amalric and Michael Lonsdale. The men who help track down the Munich plotters are congenial, gentlemanly, and completely untrustworthy, and as Avner chats with them about their respective causes, he begins to hear what they aren’t saying: that the Israeli government is giving money to people just as likely to aid their enemies if the price is right.

The movie works so well in large part because Spielberg was in a strong place artistically (though not always commercially) in 2005. The Oscar-winning 1998 blockbuster Saving Private Ryan closed out an era where Spielberg had finally figured out how to make mature but crowd-pleasing prestige pictures. After taking a couple of years off, he spent five years—from A.I. to Munich—helming much trickier films, which dove straight into the gray areas between right and wrong, human and machine, and friend and enemy. Even his slam-bang War Of The Worlds, also released in 2005, has an angry edge.

Munich is more measured and classy than Spielberg’s action-adventures. It aims for period realism, not just in the fashions, but in the way it depicts the culture of early 1970s Israel (where many of the people in power had fought together in the wars that helped establish the nation) and Europe (where the revolutionary fervor of the counterculture had become part of daily life). But Spielberg also embraces the genre piece Munich ultimately is, working with cinematographer Janusz Kaminski to dot the darkness of night with hazy streetlamps, and to backlight the misty clouds of blood spurting from gunshot wounds. Munich is both handsome and tough. And it never lets any of its characters off the hook for long. At one point, looking to steel himself for what he has to do, Avner remembers what happened at the Olympics. Yet even in Spielberg’s flashback, a heroic moment of resistance turns ugly. Bullets fly, and the camera lens gets so streaked with gore that it gets harder and harder to tell whether anything is being accomplished.

The Munich Blu-ray (available exclusively at Best Buy until May) carries over the featurettes from an earlier DVD edition, including what’s essentially a 90-minute Laurent Bouzereau documentary, senselessly cut into 10- to 15-minute segments with no “play all” option. Nevertheless, as usual, Bouzereau comes away with something more involved than “hooray for us” promotional puffery, as he looks at everything from the film’s color scheme (which drops in red tones sparingly but purposefully, to remind viewers of bloodshed) to Spielberg’s uncharacteristic use of zooms (which make Munich look more like a product of the 1970s). Throughout the interviews, the cast marvels at how unexpectedly improvisatory Spielberg turned out to be, working quickly and coming up with shots on the fly. Spielberg, meanwhile, makes sure to keep reiterating that this movie isn’t anti-Israel or even anti-retribution, but rather a cautionary tale, urging that when it comes to violence committed in our name, “We try to make sure that the results that we produce are intended.”