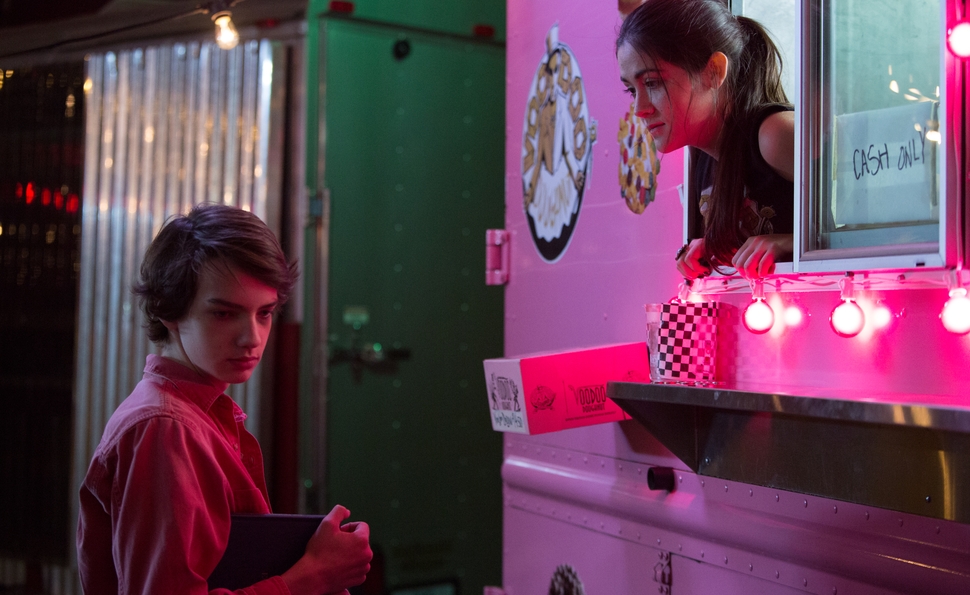 Teenagers are obsessive. Perhaps it’s the hormones, the boredom, or the pure energy of youth. Perhaps it’s a desire to piss off their parental figures, or bad high-school curriculum, or some mad cocktail of all of the above. But teens tend to lock onto certain things (crushes, skateboarding, yearbook class) and refuse to let go, long past the point where it’s reasonable or wise. James Charm (Kodi Smit-McPhee) is a teenager, and in Michael Johnson’s All The Wilderness, he’s an appropriately obsessive one. (The film’s original title, The Wilderness Of James, is more apt.)

James is preoccupied with death, and although Johnson’s debut feature attempts to hide exactly why for the majority of the film’s short run time, it’s obvious from the opening scenes why the gangly teen is fixated on untimely demises, and why he consistently stares up at a dauntingly tall local bridge that looms over him with all the mystery of a loaded gun. Haunted by a past tragedy, James compulsively tells people when they’re going to die (from a close pal to his own hamster), keeping track of the actual deaths he finds in a small notebook (“DECEASED: LARGE SPIDER”). Unsurprisingly, James isn’t very popular, and his own mother (an underutilized Virginia Madsen) is both worried for him and afraid of what he might be capable of inflicting on others.

Although his mother’s fears aren’t exactly unfounded—James is clearly very sick—they are over the top. James isn’t going to hurt anyone besides himself, but despite literal manifestations of his self-loathing and fear—portrayed by packs of mysterious hooded men who run after him at random intervals—full attention is never paid to his weakening emotional state. Even his therapist (Danny DeVito in a brief but compelling turn) doesn’t appear to be all that invested in healing the kid up and hearing him out. That frustrating facet of All The Wilderness may be its most wrenching element, even as it appears to be a wholly accidental one, thanks to a weirdly upbeat ending that forgets the character that was previously onscreen.

All The Wilderness is short on plot, lackadaisically chronicling James as he falls in with a strange new pal (Evan Ross, who’s excellent even with the slim material he’s given) and begins to explore the supposed wildness of Portland, Oregon’s late-night scene. James and his friend zip about companionably for a few days, dancing at clubs and doing drugs and fighting over the pretty girl (Isabelle Fuhrman) from James’ therapist’s office who keeps popping up everywhere. But while the film attempts to find emotion in their connection, it’s all too short-lived to stick. The stakes of All The Wilderness aren’t high, because Johnson never directs his attentions to the real issue at hand: James is ill, and gallivanting around Portland for a few nights isn’t going to fix that. Neither is a lame attempt at a breakthrough that comes in the film’s final minutes.

At least the film has a strong anchor in Smit-McPhee, a gifted actor whose rare charm is steeped in a vulnerability so profound, it’s nearly tactile. James is just growing into himself, and Smit-McPhee’s skinny, stretched-out form cannily reflects that—all loose limbs and shambling walk. James may have a darkness inside him (and, as he often tells us in eerie voiceover, an animal or three), but he’s also a mixed-up kid reeling from a destructive past. It isn’t hard to believe James would go looking for friends and for adventure, but the film’s hasty plot developments are disingenuous enough that even Smit-McPhee can’t make it work.

The film is visually impressive, however, thanks to dreamy and often elegiac work from cinematographer Adam Newport-Berra. The way the film frequently looks and operates like a music video—lots of visual appeal, not much story—is a point to Newport-Berra’s credit, and his work is a welcome distraction when most everything falls flat. Even when Johnson’s story isn’t stimulating, his snappy direction and Newport-Berra’s stunning shots keep it pushing forward, long after the obsession has worn off.