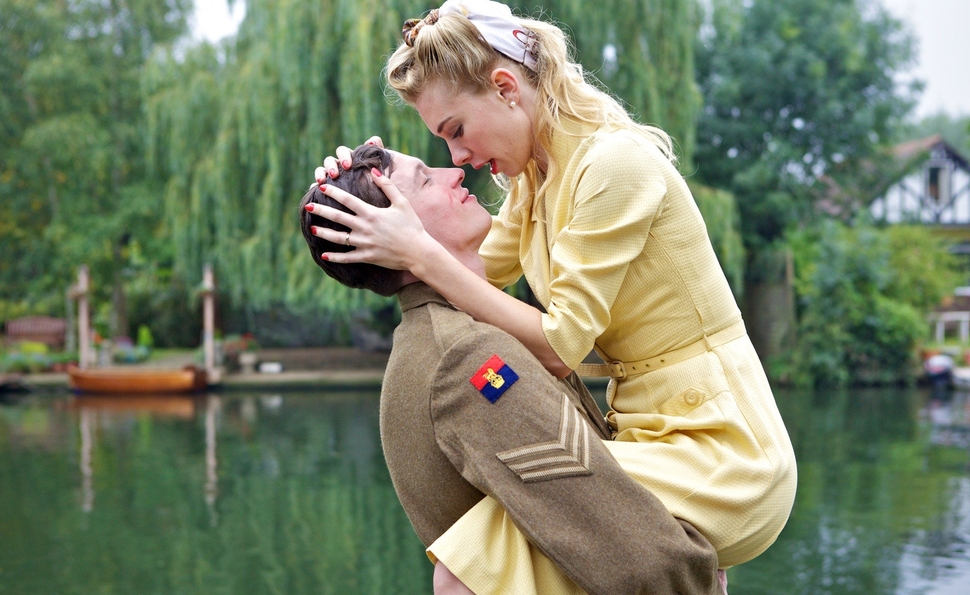 The last scene of John Boorman’s 1987 Oscar nominee Hope And Glory is also the first one in the belated sequel, Queen And Country. A young boy, Bill Rohan, shows up for school in the middle of World War II and finds the building bombed, the kids whooping with glee, and one of his friends shouting, “Thank you Adolf!” That’s the only direct reference in the new movie to the one that became a surprise Best Picture and Best Director nominee; and it’s the only reminder that fans of Hope And Glory should need. The tone of that moment—darkly comic yet sweet—brings back everything that was so wonderful about Boorman’s best film. Hope And Glory is a war movie that’s unusually honest about what life was like on the Rohan (and Boorman) homefront, where air raids and rationing were more of a minor nuisance than a major trauma. Queen And Country carries that same anecdotal structure and cockeyed reminiscences to the 1950s, where Bill is serving at a military training base, getting soldiers ready to fight in Korea by teaching them how to type.

Callum Turner plays Bill as a young man: a lanky, handsome gentleman who’s assured and sardonic around the boys at the barracks, but an awkward puppy around the nurses at a nearby hospital. In no immediate danger of being sent off to fight, Bill spends his free time either at the cinema or conspiring with his best mate Percy to flummox their by-the-book commanding officer, Sgt. Maj. Bradley. David Thewlis plays Bradley as both humorless and powerless, while Caleb Landry Jones plays Percy as a drunken, anarchic clown. Both represent Queen And Country at its broadest, as an upstart army comedy in the vein of Mister Roberts, Stripes, Sgt. Bilko, and M*A*S*H. Long stretches of the film are about the fine art of “skiving,” and how Bill, Percy, and their buddies shirk their duties.

Frankly, Queen And Country goes much further—too much further—into the cartoonish than its predecessor, which could be plenty wacky itself. Vanessa Kirby is especially off-mode as Bill’s sister Dawn, who in Hope And Glory is a complicated, rebellious teen, but in the new film comes home from Canada as a brassy, hands-on libertine, rubbing up seductively against every man she sees—even her own brother. Some of Queen And Country plays as Boorman’s own specific, loosely connected recollections of his late teens, circa 1952, but a lot of the movie feels more like it was inspired by other movies—in particular raunchy coming-of-age pictures.

Again, though, Hope And Glory had its over-the-top characters and its at-time-jarring transitions between drama and humor. What Queen And Country has going for it that admirers of the original will appreciate—and that total novices can enjoy just as much—is how skillfully Boorman takes major historical events and filters them through small, personal moments. Besides the British involvement with the Korean War, the film tackles the death of King George VI, the coronation of Queen Elizabeth II, and the arrival of television in middle-class English homes like the Rohans’. In Queen And Country, Boorman’s take on these events comes from the perspective of a smart-assed kid who’s just as excited by the dates he’s going on, by the movies being shot near his family estate in Shepperton, and to talk about films like Strangers On A Train and Rashomon with his friends.

The conversation about Rashomon in Queen And Country is key, not just for cultural/chronological context, but because it’s a reminder that this story is being told from one person’s highly slanted angle. Bill’s semi-girlfriend Ophelia (Tamsin Egerton) makes the point that as far as she’s concerned, all the stories in Rashomon are the same, because in every one, a woman is raped; and from a big-picture point of view, Bill/Boorman’s take on 1952 doesn’t change the destruction of the war overseas or the dramatic social changes at home. But at several points in Queen And Country, Boorman shows his alter-ego swimming in the Thames and his camera is right there with him, deep in the water—just as the movie shares both Bill’s insolence and optimism. There’s very little “Weren’t we so naive?” reflection here. Bill’s the hero through and through, such that when a superior officer sneers at him at one point and says, “Our country is fucked,” Boorman and Turner put a little extra zip in Bill’s reply: “Your country, yes, but not ours.”