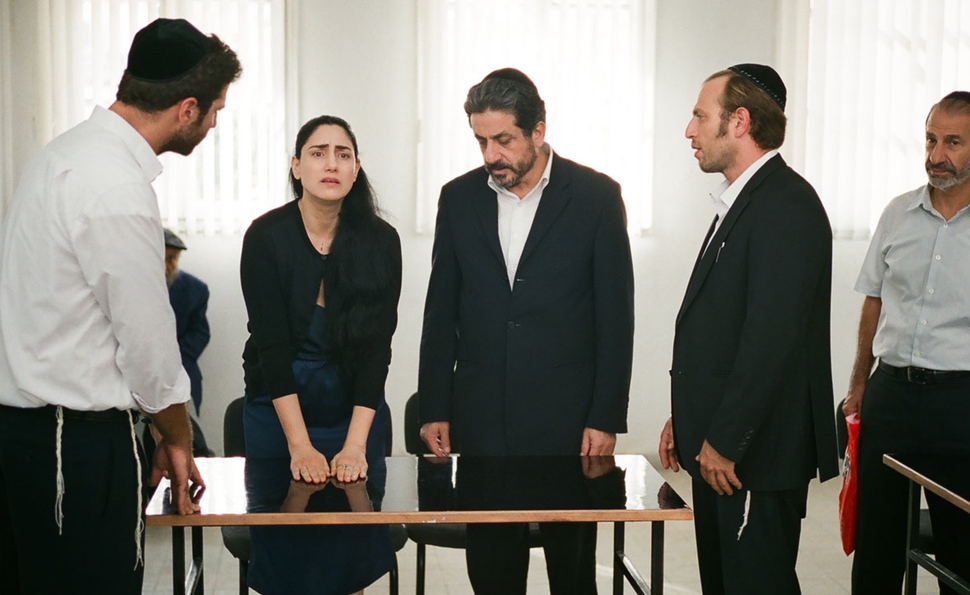 Gett: The Trial Of Viviane Amsalem

Ronit and Shlomi Elkabetz’s legal drama Gett: The Trial Of Viviane Amsalem is the third in a series of films about Viviane (played by Ronit Elkabetz), a Moroccan-born Israeli mother of four, trapped in a loveless marriage with a cold, conservative man named Elisha (Simon Abkarian). It’s not essential to have seen 2004’s To Take A Wife or 2008’s 7 Days to understand Gett, because this is a movie that derives its drama from what’s already happened off-screen. Almost the entire film is set inside of a courtroom—save for a few scenes set just outside—and almost all of the action consists of people sharing stories and impressions of Viviane and Elisha’s marriage, to help a panel of three rabbis/judges decide whether or not to force him to grant her a divorce. The Elkabetzes don’t need the audience to have any firsthand experience of what Viviane and Elisha are actually like at home. Gett works better if the viewer has to puzzle out the truth from testimony, asides, and outbursts.

There’s no real question of who’s in the right here. Viviane is miserable and wants out—and that should be the end of it. But in the Orthodox community where the Amsalems live, the husband has the final say as to whether a couple can get divorced, and Elisha’s too stubborn to give in and let his wife be happy. The problem for the court is that there’s been no infidelity or physical abuse, and while the Amsalems stopped having sex long ago, each blames the other for that. So off and on for five years, the rabbis listen to friends and neighbors who have competing perspectives on whether Viviane has indeed suffered excessive mental cruelty, or whether she’s insufficiently devout and too spoiled to appreciate a husband who makes a good living and has the respect of his peers.

Gett is mostly just a string of arguments in a bare room, but the Elkabetzes keep the film from feeling too stagey by making clear, conscious choices about what they show and how they show it. Viviane doesn’t appear on screen for the first time until about five minutes into the film—even though the judges and attorneys have been talking about her the whole time—because Gett is establishing how little a woman’s presence or opinion means to this court. The judges are often photographed from low angles to make them look more removed and imposing, and Viviane and Elisha are usually shown in profile, which is both a more striking angle visually and an indication of how the two can barely look at each other.

Ronit Elkabetz gives a lively and at times moving performance as Viviane. She barely says a word for much of the film, but reveals a lot of her character through small gestures: sporting a slight, satisfied smile when a witness’ testimony seems to back her, or looking at the rabbis with mute panic whenever they call to recess the proceedings for another few months. Even the costuming and make-up tells a story about Viviane, who starts out trying to look as pious as possible—wearing modest black frocks and keeping her hair pinned up—but gradually starts introducing little touches of individuality, like the bright red toenail polish she shows off about halfway through the film. A lot of the debate in Gett is about whether Viviane’s desire for freedom is really just her wanting a license to be a brazen hussy, which is something the court is loath to approve. Viviane’s bolder fashion choices are her way of saying that she no longer cares what people think about her.

There’s a bit of a “thesis statement” quality to Gett, which is meant to expose the unfairness of Orthodox divorce law. But that combination of outrage and exoticism also energizes the film. It’s fascinating to watch these very serious people—some with a stake in the outcome, most not—argue over whether “a good man” and “a good Jew” equates to “a good husband.” And it’s maddening to see all the hoops that Viviane keeps having to jump through. At one point, the court promises to wrap up this case in her favor if she’ll try living with Elisha again for a few months. When she complies, and then asks the judges to keep up their end of the bargain, they contend that she can’t dislike her husband that much if they’re still living together. It’s from outrages like this that good melodrama is made.