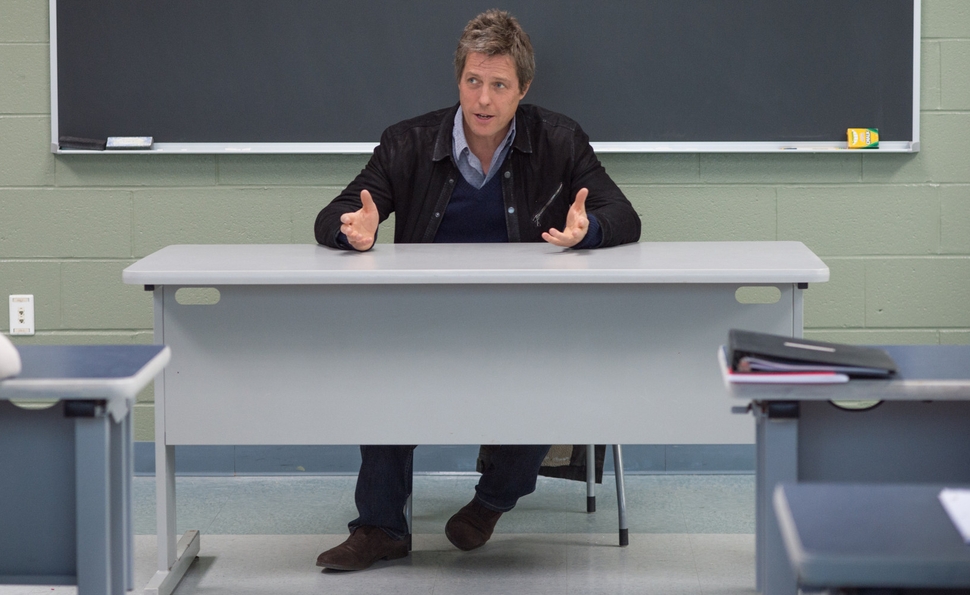 If there’s one thing Hugh Grant knows how to do, it’s play the arch outsider to endearing effect. Well-schooled in the art of portraying lovable cads, Grant has filled out his considerable rom-com oeuvre with roles that would be repugnant in less self-effacing hands. Grant specializes in bastards, but he makes them so charming that viewers can nearly forget, and even forgive, their consistently bad manners. It’s a good skill, and it’s put to heavy use in Marc Lawrence’s otherwise charmless, vaguely offensive The Rewrite.

Grant stars as the predictably pleasing Keith Michaels, a failed screenwriter and one-time Oscar-winner who only has rote ideas to offer, but can’t understand why no one wants to give him a job. (He’s a jerk given to misogyny, but that never seems to enter his mind.) Granted one last professional chance—to teach a screenwriting class at an upstate New York university—Keith grudgingly agrees, upending his already royally messy life in the process. “I used to know what was funny,” Keith says by way of apology early in the film, after insulting a batch of TSA agents for one reason or another, though little about his situation is actually amusing.

Keith has zero illusions about his ability as a teacher, and he’s got the nonexistent ethics to match. He beds a potential student (Bella Heathcote) within mere hours of arriving in his new home. He picks out his screenwriting class based on the profile pictures of his many eager applicants. (Good-looking young women and doofy dudes rule.) He abandons his students within the first five minutes of meeting them, releasing them from class for a month, ostensibly to complete their screenplays. He’s offensive, crass, and inappropriate at every turn, but Grant’s shaggy charm somehow keeps the film afloat even when it shouldn’t.

Keith’s one big hit was a feature called Paradise Misplaced, a family-friendly flick centered on fallen angels that both the Oscar voting body and the general public ate up. His fame hasn’t given him enduring wealth or success, but at least it offers people something to talk to him about, which suits him just fine, because he has nothing of substance to offer anyway. Flat, vacuous, and inane, Keith is one of Grant’s worst roles to date, and even his sparkling personality wears thin by the film’s halfway mark. (The film clocks in at 107 minutes, and the middle act drags mercilessly, only broken by too-literal jokes about how third acts in scripts should play out. The Rewrite loves nothing more than being self-reflexive about the art of screenplay-writing.)

Romantic comedies love to redeem a bastard, however, and Keith’s one shot at earning back his own wings centers on a love affair with a student. No, not the underaged student who seduced him early in the film—who’s made to look like some sort of vengeful and manipulative monster, not the confused teenager she actually is—but rather Marisa Tomei’s relentlessly good-natured Holly. Cheery and outgoing to the point of mania, Holly never once balks at Keith’s bad behavior, which she witnesses repeatedly. Instead, she acts like his very own angel, sounding board, and doormat. Grant and Tomei do exhibit a lovely platonic chemistry, however, one that almost rescues their otherwise-icky relationship. Marc Lawrence, also the writer-director of the Hugh Grant vehicles Two Weeks Notice, Music And Lyrics, and Did You Hear About The Morgans?, eventually tries to shoehorn them together—which isn’t surprising, but it does rob the film of its last good idea: That men and women really can be friends.

The Rewrite features a stellar lineup of supporting talent, including J.K. Simmons, Allison Janney, and Chris Elliott, all of whom are wasted and misplaced in equal measure. They’re expected to moon at Grant even as he’s acting like the world’s biggest prat, without personal growth or actual consequences. If this is what passes for romance or a comedy, the entire rom-com genre needs its own rewrite.