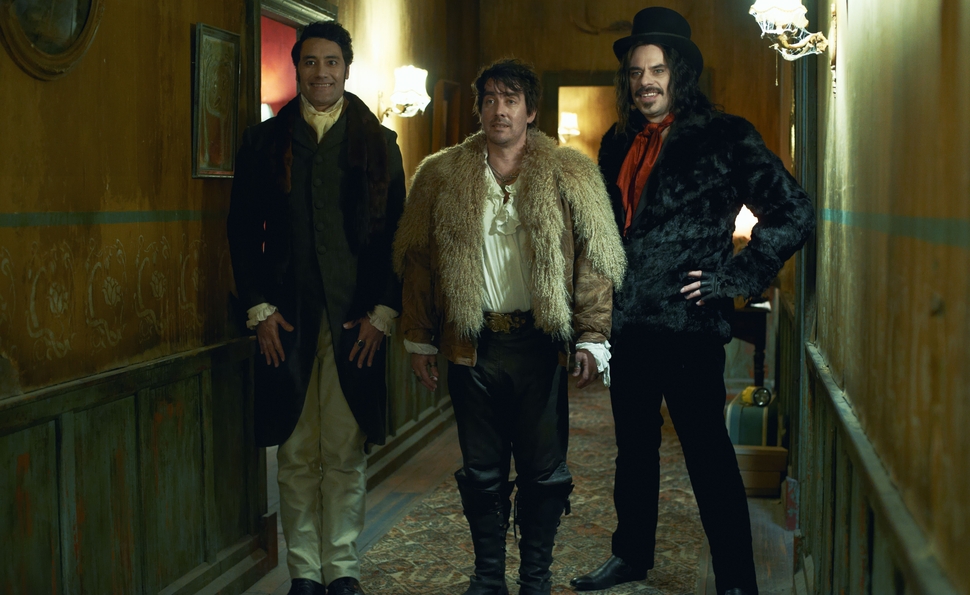 What We Do In The Shadows

The director and star of Boy, as well as a writer and director on multiple episodes of Flight Of The Conchords, the gifted triple-threat Taika Waititi has the face of an angel. In Boy, Waititi exuded such a childlike air that the title seemed to refer equally to his stunted man-child and the son who’s oblivious and naïve enough to worship him. Those demented-cherub qualities, along with a kid’s sense of madcap anarchy, inform his performance in the hilarious underworld mockumentary What We Do In The Shadows, where he still comes off as daftly innocent despite playing a 317-year-old vampire named Viago.

The film’s unexpected sweetness is attributable exclusively to Waititi, who co-wrote, co-directed, and co-stars in the film alongside frequent collaborator and Flight Of The Conchords star Jemaine Clement. Clement plays Vladislav, an oversexed vampire in the Bram Stoker’s Dracula vein whose demonic mojo hasn’t been the same since a traumatic encounter with a figure known only as “The Beast.” Vladislav was once a whiz at transforming into creatures, but after that unfortunate business with The Beast, he could never quite nail replicating their faces, which leads to at least one horrifying and hilarious image of a cat with Clement’s face. Ben Fransham and Jonathan Brugh round out the cast as Petyr, an 8,000-year-old vampire in the Count Orlok mold, and Deacon, the bad boy of the group, a sassy 183-year-old who learned after World War II that the climate was suddenly very cold for Nazis and vampires in general, but particularly Nazi vampires like himself.

The premise of What We Do In The Shadows is ingenious and simple. The film essentially asks what The Real World would be like if the folks who stopped being polite and started getting real were ancient vampires who need to feed upon the blood of the living to sustain them. This effective conceit is joined to the kind of film-ending celebration/satire of flagrant eccentricity that Christopher Guest adores—in this case, the Undead Masquerade, the social event of the season for vampires, werewolves, and zombies alike. Along the way, the quartet of the title loses one of its members due to an unfortunate vampire-hunter attack, and picks up an unwanted new flat-mate when Deacon’s servant Jackie (Jackie Van Beek), brings ex-boyfriend Nick (Cori Gonzalez-Macuer) for them to feast on. Nick turns out to be a frat-boy asshole; the only thing of value he brings to his new compatriots is the attention of his friend Stu (Stuart Rutherford), a computer specialist the entire gang likes much better than Nick.

What We Do In The Shadows brilliantly juxtaposes the mundane with the supernatural, where superhuman creatures of the night are subject to the demands of a chore wheel and complain about five years of no one doing the bloody dishes. (That is, dishes covered with blood.) The movie gets terrific comic mileage out of the contrast between the decked-out ghouls and the ramshackle, go-nowhere town where they do their dark yet tedious business.

Rhys Darby extends the film’s Flight Of The Conchords reunion as Anton, the alpha male of a rival pack of werewolves, who’s practical and obsessed with appearances to a fault. The casting of the wonderfully milquetoast Darby as an alpha male of any sort is funny enough in itself; it almost doesn’t need jokes to be hilarious. But Shadows doesn’t coast on the novelty of casting a pale, dry biscuit of a man as the leader of a group of feral beasts. Unless this is an unusually great year for comedy, there will be few funnier or more quotable movies than What We Do In The Shadows, but it’s seldom funnier than when the fussy Anton is chastising his mates for any hint of profanity, reminding them that they’re werewolves, not “swearwolves.”

What We Do In The Shadows is funny from end to end, thanks to a lovable band of vampires, the innate sweetness of Viago—who has a disarmingly romantic longing for a long-lost love who is now ancient herself—and a tone that’s genial even when blood is being shed and new vampires and werewolves are being made. Waititi and Clement bring to the material the same deadpan, straight-faced sensibility that paid such rich dividends in Flight Of The Conchords. What We Do In The Shadows also resonates as an eminently re-watchable hang-out movie, filled with characters, scenes, and gags worth revisiting, assuming audiences survive the dangerous but ultimately delightful company.

GoWatchIt: Buy. Rent. Stream What We Do In The Shadows