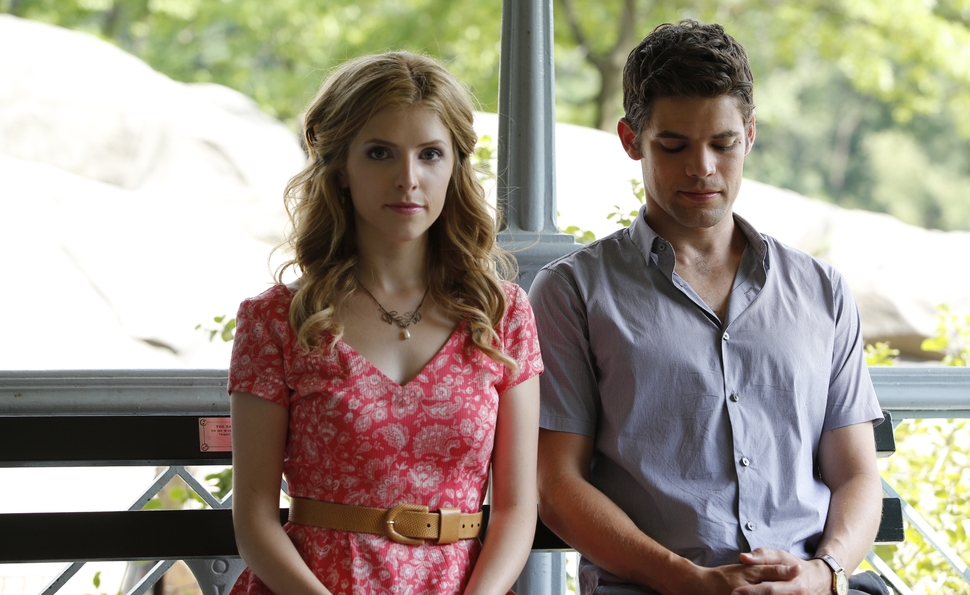 The main takeaway from The Last Five Years, Richard LaGravenese’s adaptation of Jason Robert Brown’s Off-Broadway hit, is this: Anna Kendrick is an absolute treasure. This was plain enough in 2007, when she ran off with Rocket Science, playing a hyper-verbal debate champion with nerves of piano wire. She added touching notes of vulnerability to that same type in 2009’s Up In The Air and 2011’s 50/50, but with the sleeper hit Pitch Perfect, still more was added to her repertoire—a buoyancy and deftness, not to mention a voice persuasive enough to score her a novelty hit on the pop charts. The Last Five Years is her all-of-the-above performance, a musical that showcases her full range of abilities, even as the staging and her male counterpart aren’t entirely worthy of her. But if there’s any thought to the screen musical being revived as more than a Broadway brand extension, Kendrick makes the emphatic case that she’s the star it should be built around.

Many people can act or sing, some can act and sing, but Kendrick can act while singing, which is what The Last Five Years requires. There’s little dialogue to serve as connective tissue between the songs in Brown’s musical, which tells the story of a failed relationship, so a fair amount of the singing is conversational—a little expositional, too—and that calls on a different skill-set than belting out a tune. On that front, the film makes demands of Kendrick right away with “Still Hurting,” when her character, Cathy Hiatt, comes home to a “Dear John” letter from her husband. It’s a big song, full of anguish and heartbreak, but Kendrick does more than hit the high notes—her voice cracks, a tear streams down her cheek, and an authentic emotional moment seeps through. That’s acting.

From that starting point, The Last Five Years follows a structurally ingenious conceit: Cathy tells the story of this relationship backward, starting with the tearful ending, while Jamie Wellerstein (Jeremy Jordan), her husband, starts at the hopeful beginning and ends at the point where he leaves her. On stage, the two perspectives are kept entirely segregated via alternating solos, with only a blissful mid-show duet in Central Park bringing them together. On the screen, the show’s minimalist rigor would be all but impossible to pull off, so LaGravenese has Cathy and Jamie sharing the majority of scenes together, no matter that one of them is doing most of the singing.

As the structure suggests, the main problem with Cathy and Jamie is that they’re evolving past each other, specifically in the career department. Both have dreams of making it in the Big Apple, but it’s Jamie who strikes it big, selling his first manuscript to Random House and becoming the sort of literary big-shot for whom parties are thrown and superlatives written. Cathy has a talent for musical theater, but years without callbacks lead to the discouragements of bartending jobs and summers at theater camp in Ohio. She has no interest in hitching to his star without making a name for herself, and he loses interest in her, as other opportunities (and other women) present themselves to him.

The switch in perspectives is meant to give both parties a full airing, but that’s where the imbalance between the two lead performances hurts the movie. Jordan won acclaim for his roles on Newsies and Bonnie & Clyde on Broadway—including a Tony nomination for the former—but the distance from stage to screen proves difficult for him to bridge. Though he’s breezily charming in lighter numbers like “The Schmuel Song,” a song-story about an old Jewish tailor, complete with a sweet finish, he comes off as a freshly scrubbed American Idol contestant when something more genuine is required of him. He could probably win American Idol, granted, but he either hasn’t reimagined the role for the screen, or he doesn’t yet have those tools in the box.

LaGravenese isn’t the right person for the job, either. Always better as a screenwriter (The Fisher King, A Little Princess, Behind The Candelabra) than as a director (Living Out Loud, Freedom Writers, Beautiful Creatures), LaGravenese does nothing particularly dynamic with the camera, especially in the transitions between songs and time periods, which are rendered as listless pans across the sky. On the other hand, he’s wise enough to yield the floor to the performers, shooting most of the film in widescreen medium shots that aren’t broken up by the editing. When The Last Five Years is at its best, that puts him in Kendrick’s service, and the sweeping emotional arc of her character makes the film at least half-realized, with heartbreak on one end of the spectrum, and a bittersweet form of bliss on the other. One of these days, perhaps the modern screen musical will finally catch up to her.