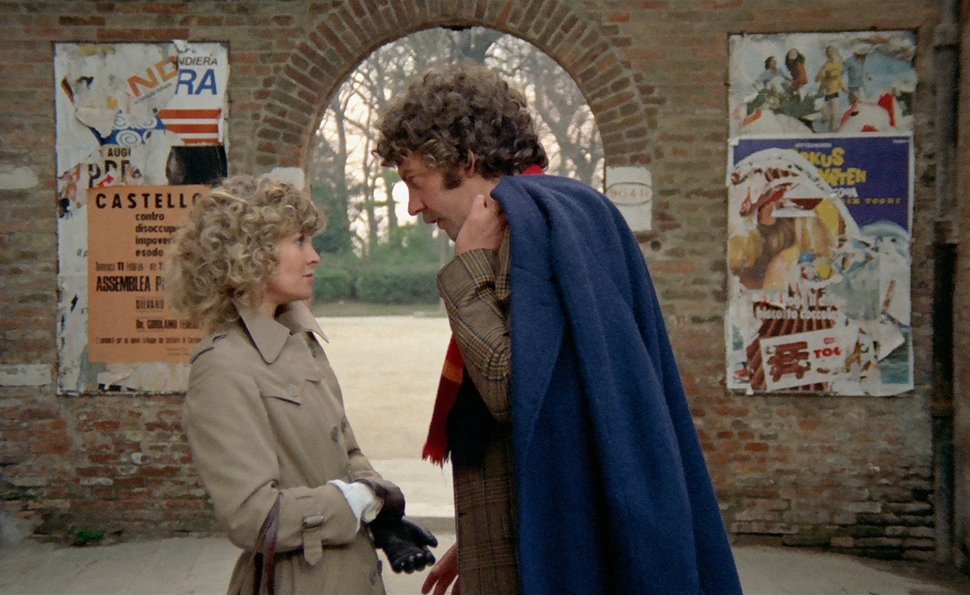 “Time is always present.” So says director Danny Boyle about Nicolas Roeg on the new Criterion edition of Roeg’s 1973 film Don’t Look Now, and there’s no better or more concise description of Roeg’s sensibility. Events may move on a continuum, but our minds double back constantly—and in the case of Don’t Look Now, based on a Daphne du Maurier story, they jump ahead through spooky premonitions and extrasensory perception. For a British couple in Venice, desperate to shake off the guilt and grief associated with their daughter’s death, the collapsing of time serves as a poignant, terrifying reminder that such tragedies are not only inescapable, but can reverberate in devastating ways. The film isn’t easy to classify—it’s a psychodrama that occasionally sharpens into blood-curdling horror—but the experience of watching it is deeply unsettling, owed partly to its shadowy evocation of Venice in decay, but mostly to Roeg’s ability to keep haunting the present with the past. The images have an associative rhythm that reflects the characters’ consciousness, and disturbs the audience’s subconscious.

Roeg wastes no time in knocking viewers off balance, introducing key visual motifs—water, broken glass, a red raincoat—before the main characters have said more than a few words. On a rainy afternoon, a little girl in that red raincoat falls into the pond in her backyard; inside the house, John Baxter (Donald Sutherland) has a feeling that something terrible has happened, but by the time he rushes out to save her, she’s already drowned. Without dwelling for a microsecond on the immediate aftermath, Roeg whisks John and his wife Laura (Julie Christie) to Venice at some unknown time in the future—a month? a year?—where they’ve escaped to get their heads straight. John is busying himself with the restoration of an old church, but Laura’s face is still clouded with grief, making her especially susceptible to the visions of a blind seer she meets in a restaurant. The stranger tells Laura her daughter is happy and present, and the thought instantly reassures her and takes her back to something like her normal self. (John and Laura celebrate the mood change in one of the most graphic and justly revered sex scenes in film history.) But darkness creeps back into their lives when John starts seeing a red-hooded figure that uncannily recalls his dead child, and a series of murders grip the city.

Had Don’t Look Now been told in a more conventional, straightforward way, it would have been shockingly banal—a meaningless tragedy, followed by a mystery that resolves itself more by chance than by snooping. But Roeg is eager to scramble up the chronology, make visual connections between colors and shapes, and fiddle around with crosscut and montage sequences, and he makes a beautiful, terrifying puzzle out of it all. And while the overall tone is simultaneously mournful and spooky, he’s willing to break it up playfully, too: The sex scene, cutting between John and Laura’s vigorous lovemaking session and the two of them dressing for dinner afterward, would connect under any circumstances, but as the eye of an emotional hurricane, it’s particularly effective.

Don’t Look Now culminates in a shock for the ages, the grim payoff to Roeg’s editing scheme. But it would all be mere supernatural hokum if the film weren’t so persistently insightful about the gnawing pain of losing a child, and how the mind can keep that wound from scarring over. John and Laura can leave the home where this tragedy happened, but that isn’t the same as escaping: One of the most romantic cities in the world becomes, from their perspective, a twisted psychic space full of catacombs and rot, driving them further into tragedy. It would all be unbearably sad, if it weren’t chilling to the bone.

An unusual catch-as-catch-can assortment of supplements by Criterion standards, with a couple of mini-docs taken from a previous Blue Underground edition of the film, and a couple more that have been assembled out of new interviews. But they cover a lot of ground. Of special interest is a new interview with Don’t Look Now editor Graeme Clifford, who talks about the unusual and radical shape the film took in post-production, and “Nicolas Roeg: The Enigma Of Film,” which has interviews with Boyle and Steven Soderbergh, who jokes that he’s ripped off Roeg so shamelessly (for the sex scene in Out Of Sight, most plainly) that it’s a wonder the director hasn’t taken him to court. Many of the major players contribute memories in one or more of the features, including Roeg, cinematographer Anthony Richmond, co-writer Allan Scott, and the two stars. Before he was cast, Sutherland recalls suggesting to Roeg that he change the ending, and giving him a thoughtful rationale explaining why. “Do you want to be in the movie or not?” Roeg asked, brusquely. Sutherland claimed he learned a valuable lesson about being an actor that day.