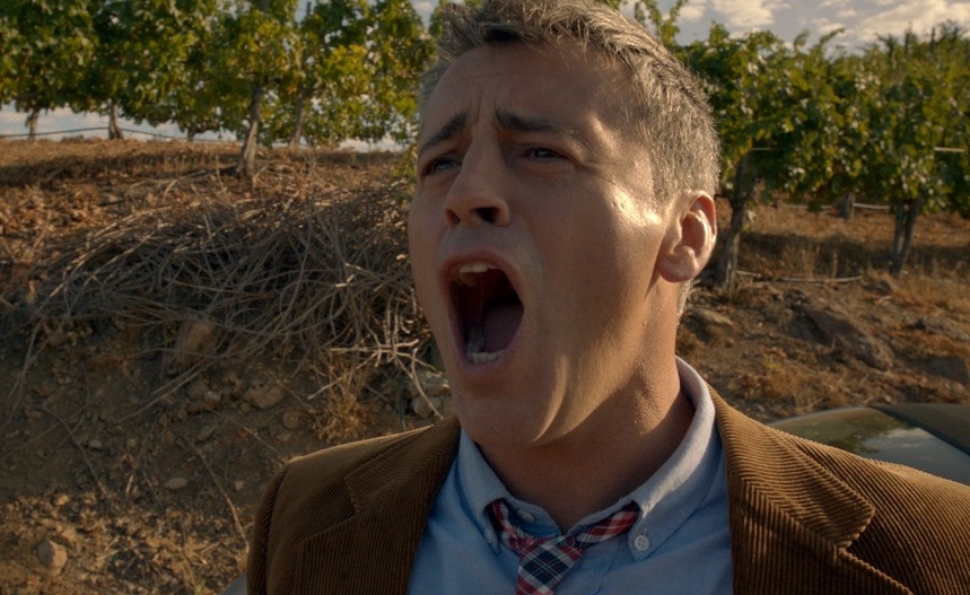 Like a lazy student padding out his work with unnecessary verbiage, Lovesick opens by defining its title. It scarcely gets more ambitious from there. Luke Matheny’s perversely milquetoast romantic comedy seems to have escaped from the afternoon schedule of the Lifetime network and secured a VOD and theatrical release it patently does not deserve.

In a lead role that makes his decision to co-star alongside a little person in a chimp suit in the simian-themed baseball comedy Ed seem savvy by comparison, Matt LeBlanc play the terminally lovesick Charlie Darby. Charlie seems an ideal catch: handsome, polite, clean. He’s also supposed to be so deeply devoted to his job as the principal of an elementary school that he seemingly knows everything about his students’ lives. But the filmmakers overplay their hand by making Charlie seem so omnipresent that the only way he could have so much information about his students is by peering through their windows at night, so he can see exactly how many Lego figures they possess or with whom they’re playing videogames.

Charlie has just one small character flaw (beyond potentially stalking his students): When it comes to romantic relationships, he’s completely insane. He possesses a crazy brain that assumes that if a woman he’s dating talks to another man, is connected to a man via a social-media site, purchases a man’s shirt, or even thinks about another man, then they must be hooking up. Then again, Lovesick is so squeaky-clean that Charlie probably just imagines that the object of his desire is holding hands and smooching some rogue the moment she slips out of his sight.

When Charlie meets a dancer/singer/aspiring substitute teacher/generic blonde Molly (Ali Larter), it’s bad news for her, him, and the audience alike, because it isn’t long after first exchanging formalities that Charlie begins to imagine that Molly is cheating on him with a broad spectrum of men that run the gamut from a handsome concierge to a musician to Dr. Oz. Charlie doesn’t really need any evidence for his paranoia and insanity to run wild; all it takes is Molly being within spitting distance of a reasonably eligible man for Charlie to assume they’re planning to run away together. So when Molly vacations in Italy, his feverish imagination kicks into overdrive. He follows her to Europe hoping to catch her in an act of infidelity, only to discover, much to his horror, that she’s in Italy vacationing with her elderly grandmother.

All it would take to make Love Sick a whole, faith-based film would be the removal of a pointless subplot where a random lunatic played by Chevy Chase comes into Charlie’s apartment to watch pornography with him (a running gag that seems to exist solely for an offscreen voice badly imitating Tom Hanks as Forrest Gump to say, “Life is like a box of condoms”) and the addition of a few speeches about Jesus. Love Sick is so unrelentingly bland that it seems to be steering toward the revelation of some dark secret that will add a kinky twist to all the vanilla hijinks that came before. But the film never colors outside the lines, as its increasingly unsympathetic protagonist sabotages himself in increasingly unforgivable, irritating ways.

Charlie’s only defining characteristic is his uncontrollable and repellent romantic jealousy, but Molly isn’t lucky enough to have even a single character trait: She’s just a good looking girl upon whom Charlie can project his feverish and self-defeating fantasies. Truth be told, anyone who behaves in such a dishonest and deranged fashion doesn’t really deserve love, and to its credit, Love Sick at least acknowledges that its protagonist’s issues with women go past being a little jealous and deep into the realm of profound mental illness. Charlie really needs a lifetime restraining order to keep him away from even the idea of a romantic relationship, though audiences should know well enough to stay away from this perversely bland, achingly dull romantic comedy, which is the cinematic equivalent of a sandwich composed of two slices of Wonder Bread with mayonnaise and American cheese squeezed in between.