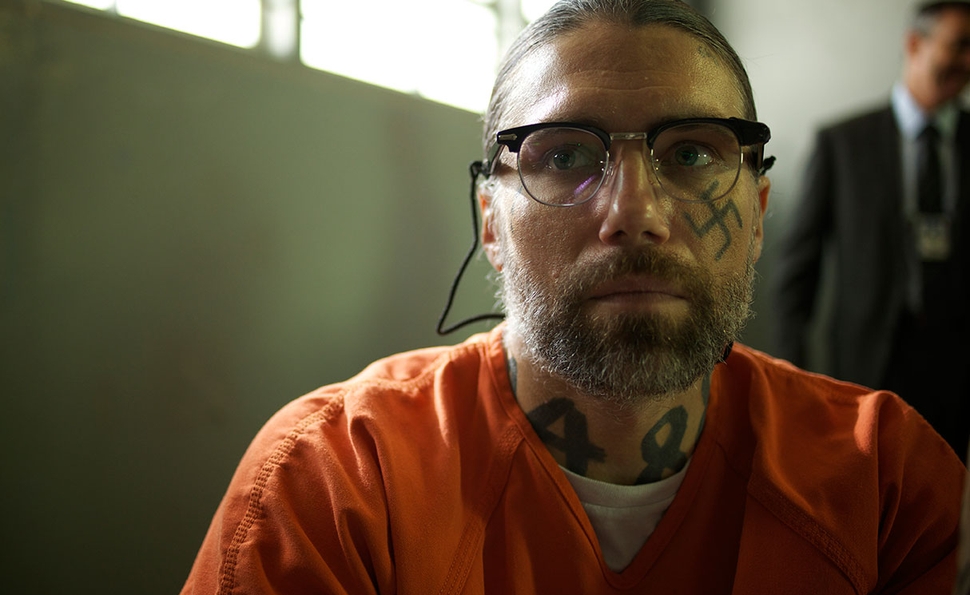 Danny Glover, weary but defiant, gazes into the wild eyes of a raving bigot. Speaking softly but insistently, he urges the man to put his gun down. No, the film isn’t Lethal Weapon 5, though that’s a solid guess. It’s Supremacy, a grim, dim home-invasion hostage drama. And it has an urgent truth bomb to drop on the subject of racism. Ready?

This white guy in the movie, the one with the greasy hair and feral goatee and—here’s the dealbreaker—the swastika tattoo on his face? Who murders a policeman before the opening titles have even finished, who uses the n-word as punctuation, and who then holds a family of six hostage in their own home?

Terrible, in fact. A racist. A soldier in the Aryan Brotherhood. A felon. An ex-con. His 15-year stretch in Pelican Bay State Prison only ended today.

Set in 1992 and puffed up by that meaningless, catnip-for-dim-people phrase “based on true events,” Supremacy is a well-acted, abysmally written, deeply unpleasant exercise that pays no dividends of insight (or heaven forfend, amusement) for the chore of enduring its endless racial epithets and handheld shots of gun barrels in faces. It operates under the fallacy that reproducing the bare form and outcome of a real hostage crisis absolves the filmmakers of any obligation to try to understand what made these actual events actually occur.

Eric J. Adams’ screenplay makes the hostage-takers—that is, Tully (Englishman Joe Anderson, credibly impersonating a white-trash ’Merican), and Doreen (Dawn Olivieri), the drug-addled Aryan Brotherhood groupie who picks him up from jail—its focus, giving them far more screen time than their thinly sketched victims. But whatever Tully and Doreen have in mind remains opaque. The pair have never met before Supremacy’s uncharacteristically strong, observant opening scene. Both received orders from “Sobecki,” a mysterious, still-imprisoned Aryan Brotherhood leader. Doreen is nervous, rehearsing her opening line to Tully as he approaches her truck. “You’re a lot shorter than I thought you were going to be,” she tells him. She gives him a gun, one she’s risked bringing onto prison grounds in her vehicle rather than waiting and giving it to him at another time. So they must’ve had something in the works, right?

Their plan doesn’t matter. Why Tully deviates from it so irrevocably, shooting a sheriff’s deputy dead within hours of his release, does. Did he kill the cop because the officer was black? Or because he was about to be caught in possession of an illegal firearm? Would Tully have chosen to go back to prison peacefully if a white cop pulled him over? Isn’t it just a coincidence that the family whose home Tully barges into while hiding from the police happens to be black? Adams and director Deon Taylor can only shrug at such questions. Hey, these are Actual Events. We don’t know why they happened.

Fair enough. So why build a movie about them, then?

Adams and Taylor keep their paucity of ideas hidden as long as they can—longer than they’d get away with if Anderson and Olivieri weren’t so persuasive in their roles. Structurally, Supremacy harkens back to that post-Pulp Fiction era when so many crime pictures shuffled the order of their scenes to try to jazz up a tired story, or paper over the holes in a nonsensical one. Adams’ script includes several flashbacks, but never to farther back in time than Tully’s release, where the movie begins. There’s no attempt, subtle or otherwise, to explore how Tully became a hate-filled, violent bigot. It’s not even clear whether these flashbacks are Tully’s memories or Doreen’s, or what precious payload of revelation the filmmakers think they’re holding back by waiting until three-quarters of the way through the movie to show us that—SPOILER—Tully robbed a convenience store that afternoon.

A convenience-store stickup. That’s the big, Soylent-Green-is-people, what’s-in-the-box secret they were sitting on. Oh, and also racism is an existential blight upon the soul of our common humanity.

The hostages include a seemingly fortysomething mother, her teenage son and daughter, her infant grandchild, and one grade-school-aged boy. But only one gets explored in any real way. This is Danny Glover’s character, the aged, achy Mr. Walker, an ex-con himself. His relationship to the other occupants of his house remains murky: They address him as “Mr. Walker,” but he protects them as his own kin. A movie this unrelentingly miserable could use a shot of Glover’s characteristic warmth, but he dials his wattage down to pilot-light level, growling his lines almost unintelligibly.

In what plays like a soapy contrivance whether or not it was, in fact, Based On Actual Events, one of the sheriff’s deputies (Derek Luke) hunting Tully just happens to be Mr. Walker’s estranged son. This is relevant only in that said estrangement prevents the deputy from doing his job and searching his pop’s house when he suspects, correctly, that a pair of armed fugitives might be hiding out inside.

This might’ve worked if Taylor—who has specialized in low-budget horror films until now—had embraced the pulpy-potboiler approach. But he’s determined not to let an ounce of lightness or fun seep into his leaden thriller, because he’s convinced he’s making a statement. Literally. Here are the first two paragraphs of his Director’s Statement, which deserve to be reproduced exactly as they appear in Supremacy’s press notes—the same notes that describe his film as a “racially charged physiological independent drama”:

“Supremacy is a very powerful film that deals with racism and family.  As a filmmaker, the film was often at times very hard to work on for the simple fact that you are dealing with very powerful issues and beliefs that are not often spoke about. They are in fact taboo! I truly believe that Supremacy is one of the most powerful films that has been made in the last few years that speaks directly to racism.

The film takes you on a journey through the eyes of a white supremacist who truly believes that white is good and all else is bad. While making the film, I wanted to take the audience on a roller coaster ride of emotions. I tried to push the envelope to allow people to know and to realize just how real racism is and how hurtful words and even uneducated can be.”

He couldn’t have said it any better himself. And he hasn’t.