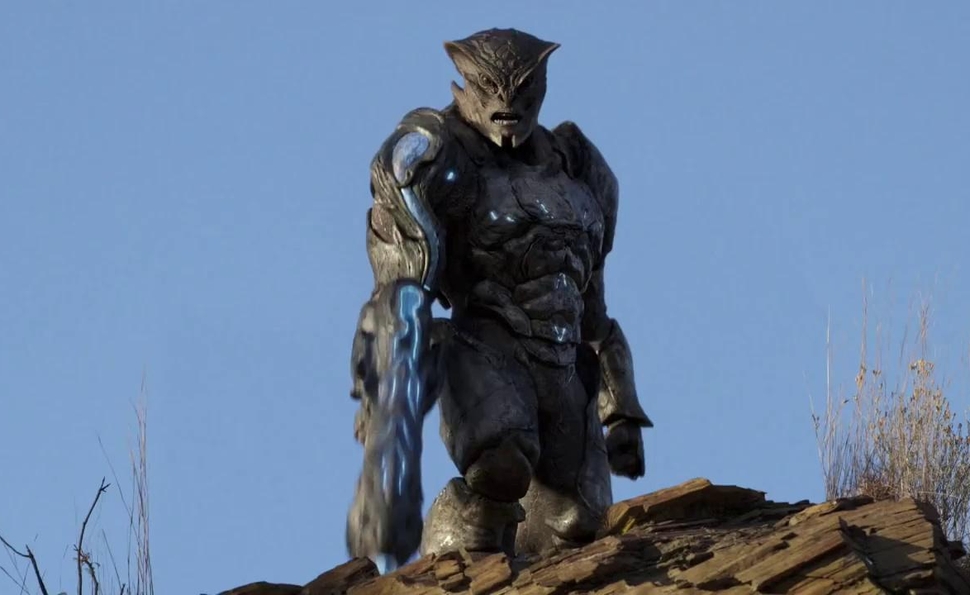 Alien Outpost often feels less like an independent science-fiction movie and more like a sizzle reel for its writer-director, Jabbar Raisani. A mockumentary about the aftermath of an alien invasion that borrows liberally from District 9 (its original title was Outpost 37), the film has some clever expository touches, but never achieves a coherent narrative drive. What it does have are several opportunities for Raisani, a visual-effects specialist who has worked on Game Of Thrones, Predators, and 2005’s Fantastic Four, to show off convincing low-budget aliens and spaceships from just a couple of nondescript sets. But the film’s generic mythology, the part that doesn’t cost anything, is what really could have used some punching-up.

The movie follows a unified Earth military in the years after fending off an attack by the “Heavies,” armored two-legged extraterrestrials who show up in the year 2021 to murder Earthlings for no reason. As a quick prologue demonstrates through onscreen text, doctored news footage, and talking heads, some of the baddies stuck around once their mothership retreated, so the military has continued to man various outposts around the globe a decade after everyone else has forgotten about the Heavies. A documentary crew, embedded with a batch of new recruits, visits Outpost 37. The station is located somewhere on the border between Pakistan and Afghanistan, and staffed by soldiers from the U.S., Germany, and elsewhere.

The personnel each get 30-second on-camera testimonials to explain why they joined the army and how they feel about each other. Then they all blend together. When some rise to the surface, like young Frankie (Sven Ruygrok) and jokester Bones (Tapiwa Musvosvi), they mostly serve the same purpose to the film: to form a band of brothers for the aliens to threaten (physically, not psychologically). But say this for Raisani’s approach: At least it isn’t found footage. Alien Outpost is meant to mimic a finished Restrepo-like military documentary, with deliberate editing choices. This justifies a tell-not-show approach (annoying), but also frees the film from pretending it doesn’t know the ending already, which can’t be said for other, far lazier low-budget genre pictures where the cameraman is also a character.

Like Neill Blomkamp’s Apartheid allegory, Alien Outpost—also filmed in South Africa—has overtures to real-world political climates. The outposts are a clear parallel for continued military presence in Afghanistan and Iraq; the documentary crew explains early on that they’re following “men fighting a war the world has chosen to forget,” and military contractors and drones duly make appearances. The film’s best idea is that decades-old global tensions were being healed when the aliens arrived: Another outpost is in Iran, implying friendly relations with the country, and a soldier makes a reference to Korean reunification. Perhaps war is a virus that can never be eradicated, and would be transmitted via outer space if Earth’s guns threatened to stop blazing for good.

There’s also a local translator (Khalil Kathrada) who risks his life to help the military, and the film’s most powerful image comes when the soldiers stumble into his house at a late juncture. But once the Heavies arrive back on the scene, Raisani uses their presence—and the way the military dispatches them—to dodge complexity in favor of shooting stuff for freedom’s last stand. It’s Starship Troopers without the irony. But it looks nice.