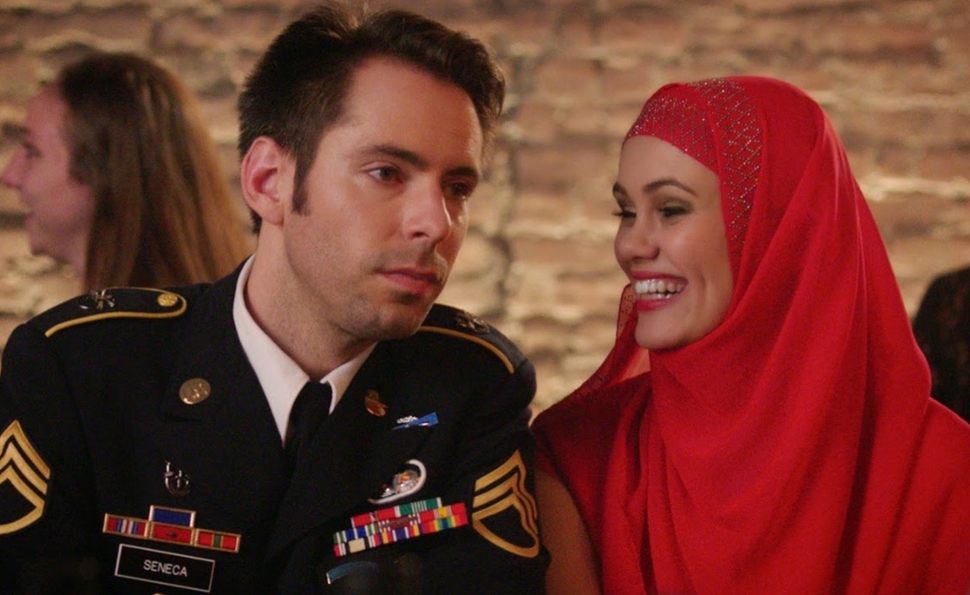 Some lovers aren’t as mismatched as they first appear. In Amira & Sam, the feature debut of writer-director Sean Mullin, Martin Starr plays Sam, a veteran of several tours in Iraq, opposite Dina Shihabi’s Amira, a young Iraqi woman in danger of being deported from New York. He works as a doorman at a high-rise apartment, taking the ferry over from Staten Island to serve Manhattanites with little respect for the people who open their doors and keep their elevators running. She hawks bootleg DVDs on the street, offering chipper summaries of movies like Bridget Jones’s Diary and Yes Man (“He can’t say no!”) to indifferent passersby. Little seems to connect them, despite Sam’s friendship with Amira’s uncle and guardian Bassam (Laith Nakli), who worked as a translator for Sam’s army unit, much to his family’s peril. And initially, Amira rebuffs Sam’s company in the strongest possible terms when he comes to visit Bassam, wanting nothing to do with American soldiers; she’s seen enough of them already.

Yet even if the plot didn’t force them to spend time together when Amira flees arrest and goes into hiding at Sam’s apartment, Mullin’s film neatly establishes they have more in common with each other than they do with others in their respective communities. Amira wears a hijab, but in her first scene, gets criticized by another Muslim woman for exposing skin below her neck. Starr, putting his innate dryness to good use in a rare lead performance, makes Sam’s alienation seem even more pronounced, barely swallowing his contempt for the privileged goons he has to serve, and making clear his skepticism about a job offer from his cousin Charlie (Vampire Diaries’ Paul Wesley), a Wall Street success who wants to exploit Sam’s veteran status to land a major client who served in Vietnam (David Rasche).

The film is set in summer 2008, and its financial subplot plays out as the last days of happy irresponsibility before a reckoning. But much to its credit, it only occasionally makes Charlie, and the world he represents, seem irredeemably villainous. Wesley plays him as a guy who cares for Sam and is happy to help him out—but especially if profit is involved. Sam’s attitude mirrors the film’s: He listens without comment to Charlie and his stockbroker friends talk about how they came this close to signing up for the military after 9/11, but then somehow didn’t get around to it, and stuck around and got rich while Sam and others like him served overseas. When they ask him for his most fucked-up war story, Sam only gives them a harmless tale. He knows they don’t really want to know what he’s seen, even if they don’t.

A National Guard officer and 9/11 first responder who later commanded soldiers stationed at Ground Zero, Mullin knows Sam’s world, and how his experiences would make the America he returns to seem almost as foreign to him as it might to Amira. If anything, she navigates her new home with more confidence than Sam. She uses her assertiveness as a shield, and the heart of Amira & Sam comes from a romance that breaks down the defenses of both characters, whose time in Iraq has given them a perspective other people can’t share. Starr and Shihabi, a charming newcomer, play off each other beautifully, and even when the film becomes a little too heavy-handed, particularly when Charlie’s wedding shower goes awry, their relationship keeps it grounded.

Mullin, like Sam, also works as a stand-up comic, and he brings a nice sense of timing and concision to the dialogue here. He directs with little flash, but the film doesn’t really need it: The most memorable scene is a long, unbroken take in which Amira and Sam figure out what to do with the romantic feelings that have sparked between them, even as they go out of their way not to acknowledge them. It’s a sexy, honest moment between two characters in an impossible situation—but who just might make it work, because impossible situations have become all they know.