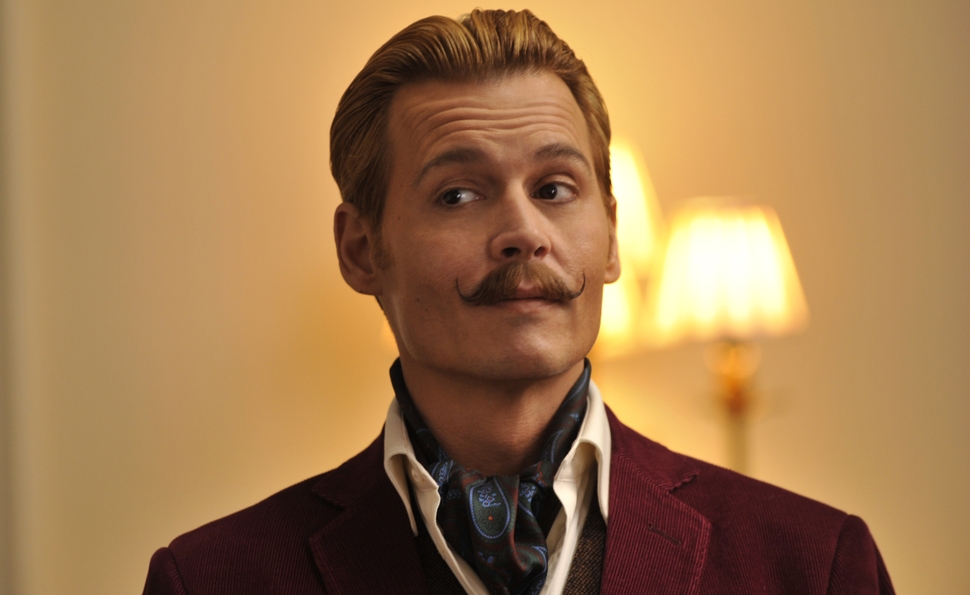 Johnny Depp sports a silly mustache as art-swindler Charlie Mortdecai in Mortdecai. It parts like a curtain around the center of his upper lip, and narrows to a Rollie Fingers smile on the sides. Other people agree it’s silly, and tell him as much. Repeatedly. His wife Johanna (Gwyneth Paltrow) likens it to a vagina, and refuses to sleep in the same room with him until he shaves it off. She’s so appalled, in fact, that kissing him triggers her gag reflex, which in turn triggers his sympathy gag reflex. This also happens repeatedly, and it’s easily the funniest idea in the whole movie—if only for taking the concept of a running gag literally. Perhaps the funny-mustache conceit played better on the page, since the source material, Kyril Bonfiglioli’s 1973 novel Don’t Point That Thing At Me, one in a series of Mortdecai books, has been lodged in public consciousness long enough to get an adaptation four decades later. But David Koepp’s strained farce is like Being John Malkovich if Malkovich were a mustache entering its own whiskery portal.

In truth, there’s a little more to Charlie Mortdecai than whimsical facial hair, but nothing that sets him apart from other foppish figures of fun from Britain’s elite class. Charlie is the type of guy who gets carted around in a Rolls Royce and refers to America as “the Colonies,” but he’s a rogue, too, known for his dealings with the seedier elements of the art world. When a thief swipes a valuable Goya painting, murdering the restoration artist in the process, Security Service agent Martland (Ewan McGregor) offers Charlie a chance to climb out of his current debt if he helps track down the crooks, whom he suspects have ties to international terrorism. Meanwhile, Charlie needs to sell the Rolls to get solvent, so he and his manservant Jock Strapp—pause within these em-dashes for laughter—deliver the car to a buyer (Jeff Goldblum) and his nymphomaniac daughter (Olivia Munn) in Los Angeles.

Mortdecai’s farcical mechanics are actually well worked out, which is a credit to Koepp, an ace Hollywood screenwriter (Jurassic Park, 2002’s Spider-Man) who directed the fun late-summer sleeper Premium Rush two years ago. It’s just the jokes that are astonishingly unfunny, splitting the cast between those desperate to please (Depp, Munn) and those looking to slip off with most of their dignity intact (Paltrow, McGregor). Beyond the double-gag-reflex, these are what count for go-to jokes in Mortdecai: Jock (Paul Bettany) sleeps with many beautiful women while his debonair boss gets no action; Martland has a constantly frustrated crush on Johanna; and a nymphomaniac pursues sex aggressively. There are no punchlines to be found in any of these bits, but the expectation of laughter appears to be there, so they must be jokes, right?

The odd thing about Mortdecai is that it comes on like a randier Austin Powers, but doesn’t take advantage of its R rating; just a few axed curse words would take it down to a PG-13, so it could perhaps appeal to a younger, less discriminating crowd with its bright colors, zesty pace, and hirsute comedy. It stands to reason that kids who can’t grow mustaches are likely to find them more exotic and funny than those who can. And it definitely stands to reason they’ll dig CGI projectile-vomiting more than their parents. This barrier to entry ensures that the precious few who might like Mortdecai won’t have the chance to see it.