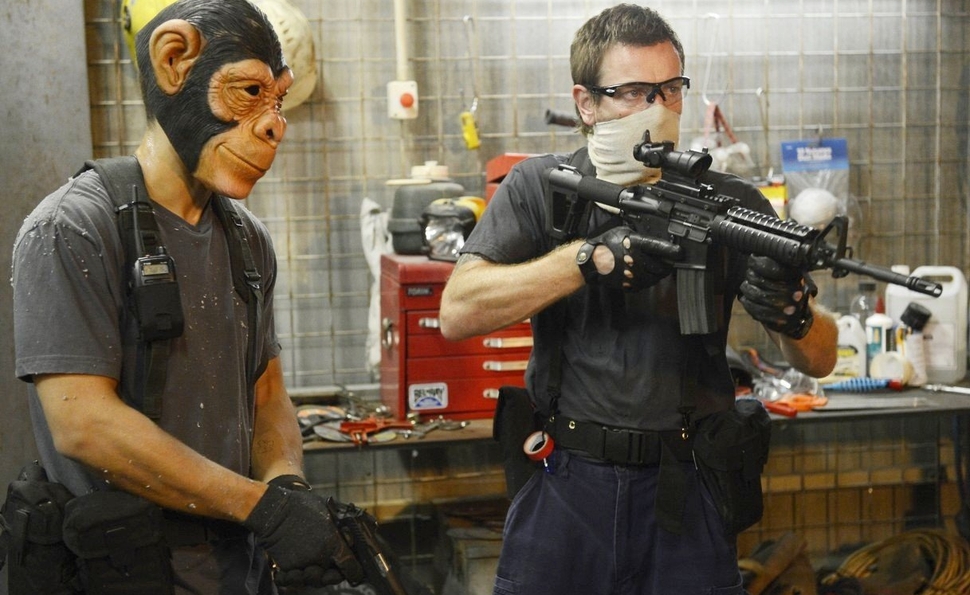 Son Of A Gun

The old adage isn’t true: Crime actually does pay. It’s just that it doesn’t pay well over time: It’s a poor investment, for big risk. Filmmaker Julius Avery attempts to cover this well-worn cinematic trope with his feature-film debut, Son Of A Gun, twisting together a surprisingly original heist story with a more commonplace meditation on the ugliness (and the sometimes inevitability) of revenge. Bolstered by strong performances and a tight narrative, Son Of A Gun is an admirable debut film from Avery, and a worthy new entry into Australia’s burgeoning class of crime features.

JR (Brenton Thwaites) is in prison for a minor offense, serving a relatively light six-month sentence. His terrified demeanor when he first rolls up to the slammer doesn’t really suggest a career criminal, but his initial instinct to keep his head down and tough out his time hints at a character who knows how to acclimate to even the strangest situations. Yet even street-smart JR is unable to hide his interest in notorious bad guy Brendan (Ewan McGregor), whom he gawps at as if Brendan were a particularly cool celebrity. (Imagine the most famous criminal you can think of. Now imagine you’re in jail with him.) Still worse, when JR isn’t admiring the apparently famous Brendan and trying to befriend him via chess skills—an uninspired metaphor that’s never revealed as anything beyond a clunky way to remind the audience that Son Of A Gun is about its own kind of game—he’s attempting to help his cowardly roommate from being further abused by a vicious group of prison thugs.

These aren’t smart things to do in prison. Still, Brendan eventually takes a shine to JR, perhaps intrigued by his own interest in his old exploits, possibly inspired by seeing a young criminal with something like a moral code. The two become allies—also in part because JR is getting out of prison soon. That’s something Brendan can use.

Once free, JR slips into Brendan’s old life—according to Brendan’s plan, of course—with relative ease, working for a big-time crime boss (Jacek Koman) who likes dabbling in local above-board goings-on as much as he likes setting up ambitious heists with his merry band of thugs and kitting out his gaudy mansion with pretty ladies. Sam (Koman) is first seen screaming at a pair of topless strippers who’ve apparently purchased the wrong color balloons for a political rally, which quickly encapsulates nearly everything viewers need to know about the guy. Although it initially feels as if JR will simply act as a Brendan surrogate until something else happens—but what?—it eventually becomes apparent that JR is in place to change the status quo himself, especially after he and Brendan set to work on a brazen heist. The real issue, though, is that JR’s dumb, doofy heart has gotten him in trouble. Again.

Avery plots one hell of a theft for Brendan and JR to carry out, and his vision of Aussie’s seedy criminal underworld is vivid and unsettling. Brendan, for all his seemingly fatherly interest in JR, is still a bad guy, and McGregor plays him with a low-simmering menace that frequently tricks both JR and the audience into believing his motivations are at least, pure-ish. JR, convinced there is honor among these particular thieves, and overly reliant on his chess-sharpened brain, digs himself in too deep, unable to comprehend his lack of control in what used to be such a simple arrangement. Thwaites pours on the puppy-dog as JR, all sweet eyes and good intentions, and when he’s forced to do terrible things, it’s remarkably unsettling. He looks too young, too sweet, and that’s the rub: He is.

Caught up in a mostly chemistry-free romance with Sam’s number-one girl Tasha (the wonderful Alicia Vikander, who still manages to ooze tough sensuality here), JR stupidly believes his crimes can pay, at least enough to break whatever chains exist between him and Brendan (and Sam and Tasha). He’s so sweet and optimistic, he actually totes around a well-worn written declaration of the things he wants out of life. Viewers know JR has changed when he tosses his vision paper into the street, grits his teeth, and imagines what it would be like to murder his ally-turned-oppressor. Thwaites’ ability to sell that sequence—which he does—is remarkable.

Son Of A Gun lacks the full-bodied tension of The Square and the world-building boldness of Animal Kingdom, other recent Aussie crime dramas that would pair nicely with Avery’s film. But it’s a strong start for the newly minted feature director. The film isn’t compelled to stretch for truly original material (the “falling in love with the boss’ gal” thing? that old gag?), but Avery has a solid ability to portray fraught relationships onscreen, and the creativity he deploys when it comes time to string together an action sequence is genuinely thrilling. Son Of A Gun doesn’t shoot totally straight, but when it lands a shot, it leaves a mark.