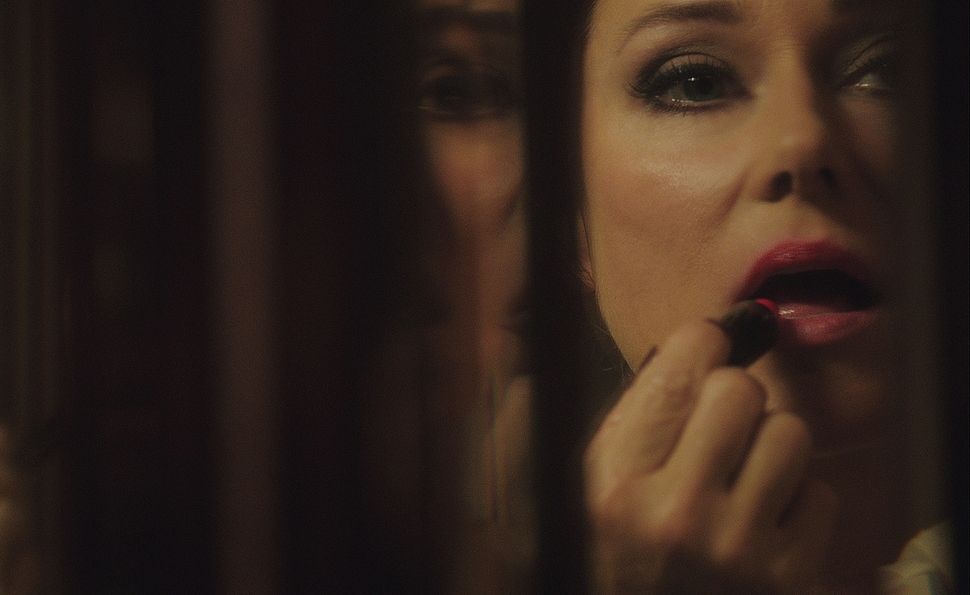 The Duke Of Burgundy

(Note: The opening sequence in The Duke Of Burgundy is best experienced cold, so the spoiler-averse are advised to rush out to see this excellent film as soon as possible and come back later to read the review. It’ll be here for you.)

Peter Strickland’s The Duke Of Burgundy begins with a series of winks. Following an attractive young woman as she bicycles toward an old countryside estate, the opening credits sequence firmly evokes the European softcore of the 1970s, right down to a freeze-frame “Perfume by” credit. This knowing pastiche comes as no surprise from Strickland, whose previous film, Berberian Sound Studio, doubled as a loving homage to the Italian giallo of the same period. And yet as scrupulously as Strickland manages the retro look and feel of The Duke Of Burgundy, it’s something of a bait-and-switch: The film isn’t some hidebound movie-movie, it’s a funny, insightful, extraordinarily beautiful love story about the generosity and compromise needed to sustain a long-term relationship. The tease of outré sex hides something more surprising, yet equally mysterious and alluring.

The cyclist is Evelyn, played by Chiara D’Anna, whose demure Euro-exoticism appropriately recalls Maria de Medeiros circa Henry & June. She arrives as the maid to Cynthia (Sidse Babett Knudsen), the mistress of the estate, who treats her harshly, castigating her for her lateness and exacting penalties for her lapses in housekeeping. It takes some time before Strickland pulls back the curtain and reveals that Evelyn and Cynthia are acting out roles in a scrupulously directed S&M game, which ends in (offscreen) water-sports. He also takes his time in laying out the terms of this sexual arrangement, which involves Cynthia accommodating Evelyn’s kinky desires. The S&M sessions aren’t a two-way street, however, and Evelyn struggles emotionally and physically to keep up with her partner’s needs, much less making some demands of her own. There’s passion between them—as lovers and as entomologists—but a perilous lack of balance.

Most films about S&M use it as kinky window-dressing, whether to brighten up a raunchy comedy or add a psychological edge to a sexy thriller, but The Duke Of Burgundy accepts it simply as an aspect of Cynthia and Evelyn’s relationship, however much it threatens to overwhelm it. Strickland imparts a useful message here: Partners have to accommodate each other’s desires, even if they don’t share them—be it odd sexual peccadillos or something as banal as watching football on Sunday afternoons, or brunching at some dreaded greasy spoon. What makes The Duke Of Burgundy so affecting is how deftly Strickland and his remarkable actresses bring something as exotic as lesbian S&M into the realm of the ordinary and relatable. Viewers can see themselves in Cynthia and Evelyn, whether they’re hand-washing each other’s undergarments or not.

At the same time, Strickland loses himself in these specific, captivating erotic rituals, which are as by-the-script orderly as hospital linens, but suffused with passion all the while. The film also has a playfulness and humor about sex that relieves some of the tension, from the offhand shots of Cynthia downing glasses of water to a great scene where the two consider a hand-crafted bed that can double as a spring-loaded coffin. (A “human toilet consultant” also nabs a screen credit.) And Strickland’s use of sound, which has been a central feature of his work since his 2009 debut feature Katalin Varga, heightens the atmosphere and occasionally nudges the film into avant-garde flourishes. The overall effect is to mimic a long-ago strain of European art cinema while raising the stakes on a relationship that isn’t as distant from our own experience as it first appears. It pays homage to the past, but it’s swooningly timeless.