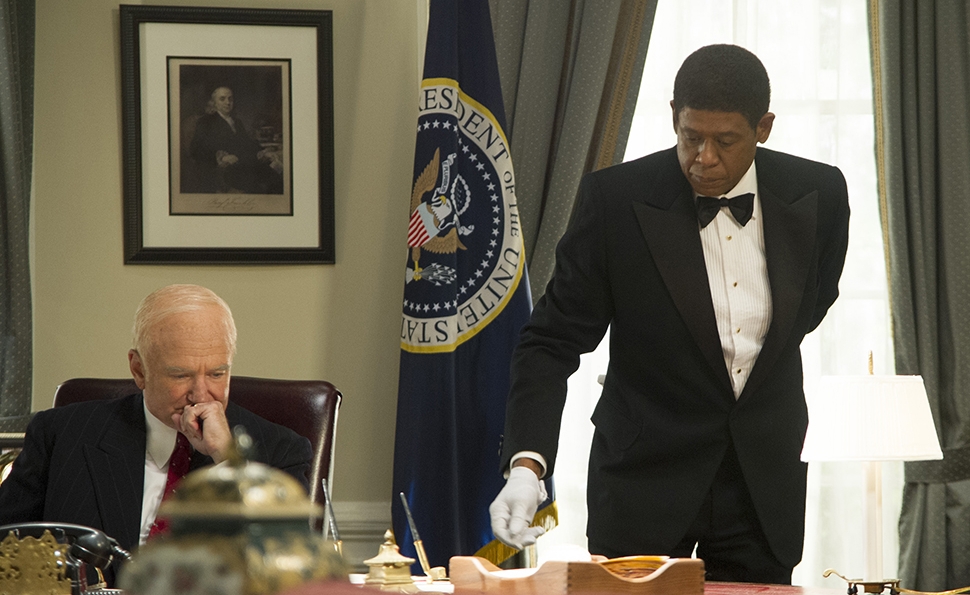 Lee Daniels’ The Butler sets out to tell two stories. The first is the introspective tale of a quiet, dignified black man whose life and career are shaped by racism. He’s a White House butler who rose to the highest ranks of his profession, but in a field that required him to be servile and invisible. His talent was to disappear into the background, to be as dependable, consistent, and inhuman as a piece of furniture. Daniels cast the perfect lead actor for that story, Forest Whitaker, a methodical, deeply internal actor of tremendous presence who’s able to suggest worlds of emotion and meaning with just his hulking frame and the pain in his eyes.

The second story Daniels sets out to tell is an epic chronicle of the history of race relations in 20th-century America. While the story of a butler coping with changing times is agreeably modest, even intimate, the second narrative is so inconceivably vast, it’s impossible for it to realize its ambitions, and foolhardy to try. But Daniels—the man behind fiascos like Shadowboxer and The Paperboy, as well as the unlikely Oscar-festooned triumph Precious—has never been one to back down from a challenge. Instead of committing wholeheartedly to telling the story of a single family, Daniels gets distracted trying to tell the story of our nation’s complicated racial history.

There’s a certain nobility to Daniels’ epic overreaching. The do-gooder spirit of Stanley Kramer informs Daniels’ bloated opus; Kramer’s 1967 message movie Guess Who’s Coming To Dinner is even referenced, along with seemingly everything else involving race and pop culture in the 20th century. In part, Daniels fails spectacularly here because he sets the bar so high.

Inspired by the life of Eugene Allen, a longtime White House butler, The Butler casts Whitaker as Cecil Gaines, a child of the Jim Crow South who witnessed a vicious overseer sexually violating his mother, then killing his cotton-picker father for objecting. This experience scars Cecil, leaving him with a terrible knowledge of man’s capacity for rage and violence. In response, Cecil develops an intense desire to conform to the world and rules of white men, which serves him well in his job as a prized employee of a fancy hotel, and then as a butler in the White House under multiple administrations, beginning with the presidency of Dwight D. Eisenhower (Robin Williams, in one of the film’s many pointless acts of stunt casting) and ending under Ronald Reagan (Alan Rickman).

In spite of the prestige and apparent good pay of Cecil’s job, his wife Gloria (a lively, rambunctious Oprah Winfrey, one of the film’s greatest strengths) and rebellious son Louis (David Oyelowo) are at best ambivalent about it. The strong-willed, sharp-tongued, hard-drinking Gloria bitterly resents the exhausting demands of the work that swallows her husband’s life, while Louis’ personality and worldview represent a deliberate rebuke to everything his father represents.

Where Louis angrily demands justice from racist white society, Cecil just wants to get by. Louis devotes his life to confronting the white power structure; Cecil is equally committed to attending to its needs. Louis is all about sticking it to The Man. Cecil is about meekly inquiring whether The Man would like coffee with his dessert.

But Louis is nothing more than the sum of his political convictions, a cartoon rebel who cycles through every civil-rights movement of the day, from a stint as a Freedom Rider to time with Martin Luther King Jr.’s entourage to a stint as a beret-sporting Black Panther, before he finds his destiny as an ambitious politician. Louis and Cecil’s clashes are dull, predictable, and didactic, and their epiphanies about each other are cheap and easy. The Butler is shameless enough to have Martin Luther King Jr. (Nelsan Ellis) himself personally deliver a sermon to Louis about the secret subversiveness of the black American domestic. And just looking through a book on black history is enough to prompt Cecil to declare, in his comically extreme old-man rasp, that his son is a heroic figure fighting for the rights of his people, not the disrespectful no-goodnik who disparages Cecil throughout the film.

The antagonistic father-son relationship is supposed to inform Cecil’s experiences at the White House, and vice versa. Instead, they seem to belong in different films that share a common cast and an unmistakable zest for clumsy, ham-fisted obviousness. With its gallery of famous names playing famous politicians, The Butler sometimes suggests the world’s longest, most sentimental Saturday Night Live sketch, while Louis and Cecil function primarily as competing ideologies to be squared in the easiest, most heartwarming manner imaginable.

The film’s roster of Commanders In Chief are essentially Disney World’s Hall Of Presidents come to life, though they’re still closer to animatronic robots than people. The film’s tremendous breadth destroys any aspirations of depth. At best, the actors playing presidents score an affecting moment or two before they’re shooed offscreen to make way for the next president and social movement. James Marsden, for example, gives audiences a John F. Kennedy worth romanticizing and mourning in his limited time onscreen. Other actors aren’t so lucky. Liev Schreiber’s Lyndon Johnson is a kooky cartoon cowboy setting up shop in the stead of his martyred former boss, then he’s brooding over Vietnam, then he’s a fuzzy memory. Even so, he fares better than poor John Cusack, whom Daniels inexplicably, hilariously cast as a feral, semi-literate, sex-crazed Southern criminal in The Paperboy, and even more egregiously miscast in The Butler as Richard Nixon. Nixon is supposed to be amusingly oblivious and tone-deaf upon his introduction, but otherwise, the laughs won by Cusack’s performance are unintentional.

The Butler depicts history as a giant montage sequence that jump-cuts from one big cultural moment to the next, ignoring the fine details that provide color and shading in its mad rush to tell the biggest possible story on the largest possible canvas. In its bid to sum up the black experience in America, Lee Daniels’ The Butler loses sight of the man at the film’s core. The protagonist disappears inside his own movie, a fatally subtle figure lost in the pomp and circumstance of a campy historical parade.