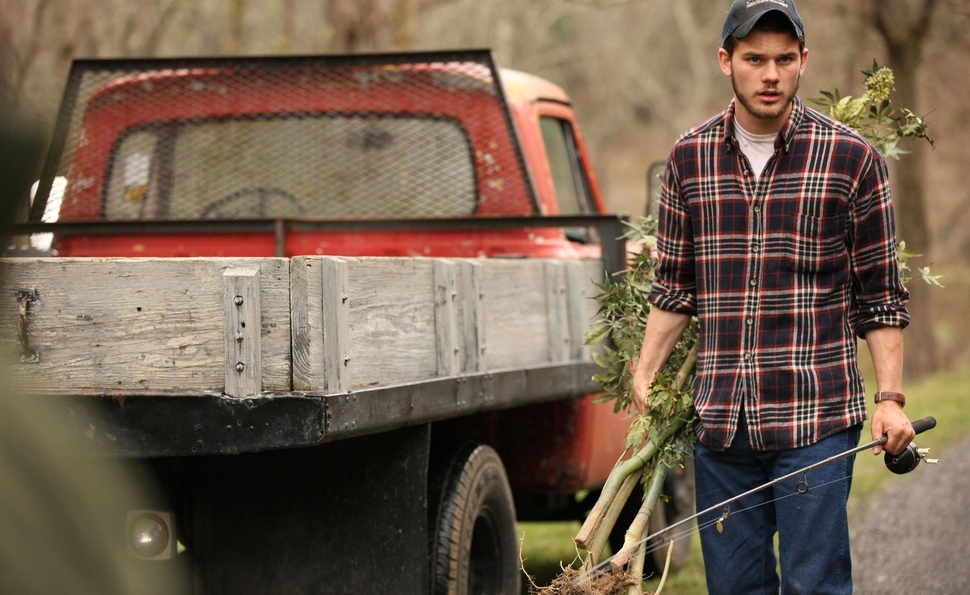 The World Made Straight

Director David Burris is a North Carolina native, and his feature debut, The World Made Straight, adapts a novel by Ron Rash, who grew up in the state and is a professor of Appalachian cultural studies. Shot in N.C., sometimes in the locations specified by the book, The World Made Straight nonetheless ticks off the boxes expected from a Deep South drama assembled by outsiders rearranging familiar clichés; commitment to regional authenticity may be in the details, but the film’s constituent parts are shopworn and unconvincing.

Straight’s thesis is familiar enough: The scars of the Civil War are far from healed now, let alone at the time of the film’s 1970s setting. The specific memory at stake is the Shelton Laurel Massacre, in which 13 accused Union sympathizers, including three teenage boys, were executed—an event the film re-creates up top without much impact. Slacker dropout Travis (Jeremy Irvine) doesn’t know his roots, but friction with his father drives him to seek refuge in the trailer of a drug dealer who naturally is more than he initially seems. A former teacher with a craving for surrogate children following a divorce and loss of custody, Leonard (Noah Wyle) takes the young man under his wing, exhorting him to learn his regional roots, tangled up in the Shelton Laurel Massacre, and acquire the basic knowledge necessary to get a GED.

Travis shows up looking for a bed one night, and literally the next day is convinced to start cramming for the exam, a quick change of heart that’s representative of the film’s hasty narrative compression. This unconvincing dawn-of-maturity plotline sporadically criss-crosses with a secondary conflict in the form of malevolently glowering dealer Carlton (Steve Earle), with whom a climactic run-in is inevitable. Tertiary importance is given to two hastily sketched-in women: Leonard’s strung-out junkie partner Dena (Friday Night Lights’ Minka Kelly), taking the role of “the whore,” with “the madonna” filled out by Travis’ sporadically present, straight-arrow nurse sweetheart Lori (Adelaide Clemens).

Viewers can expect constant reminders that they’re in the South, like Travis and his redneck buddies (including, improbably, Haley Joel Osment) throwing back beers while driving pickup trucks, listening to greasy guitar rock, and relentlessly using the word “kin.” Ostensibly set at the tail end of the Vietnam War, the production can’t muster much convincing period detail: Everyone seems to be driving old cars because they can’t afford new ones, not because they’re living in the 1970s. Small details grate, like Travis’ meticulously maintained close-cropped beard, too contemporary to match the era. The music cues are also largely from the present, and while tracks from North Carolina presences like The Connells could arguably underline the movie’s recurring Faulknerian emphasis on how the past is never really past, but co-exists with the present, they mostly seem misguided and cost-expedient.

For all the good intentions and native hands behind the camera, The World Set Straight never seems particularly credible or convincing as a fresh look at regional history. It’s constantly hampered by inelegant writing, like a particularly bald moment of foreshadowing when Leonard tells Carlton he’s going to stop selling, and Carlton, in the middle of a crossword puzzle, asks Leonard for a 14-letter-world for “mistake.” (Answer: “miscalculation.”) With thespian distractions like the unavoidably out-of-place Wyle (rocking a beard to signify seriousness) onscreen, it’s left to Earle to exude both genuine menace and any plausible sense of connection to the terrain. The outlaw country singer has evolved into a terrific actor, and he’s the only person onscreen who seems to understand where he is and how he got there: everyone else is going through the motions.