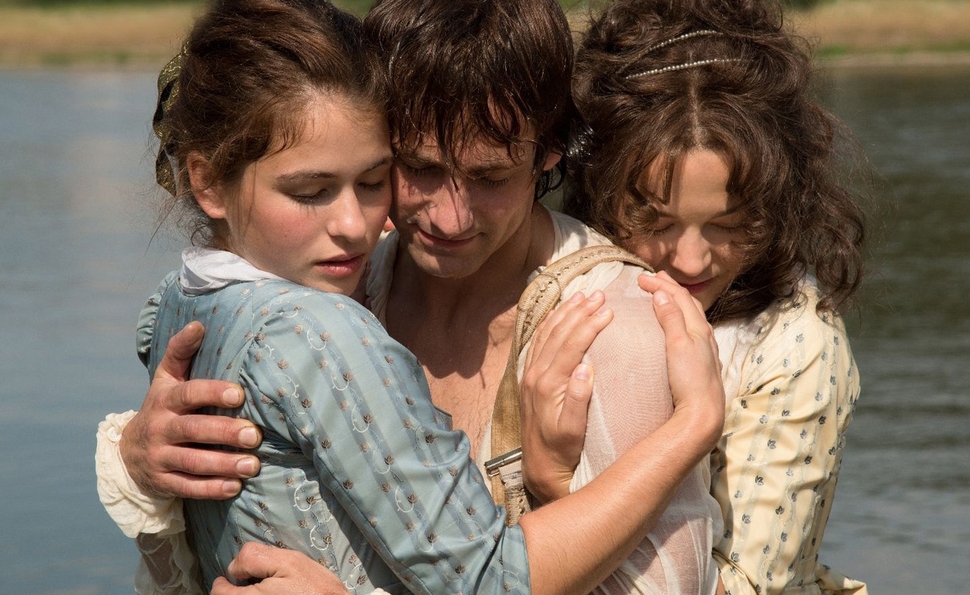 Shortly before dying in 1847, Caroline von Wolzogen, sister-in-law of famed German intellectual Friedrich Schiller, destroyed all her copious correspondence related to him, presumably in an effort to prevent the intimate details of their relationship from being known. Nor did she reveal any potentially scandalous or salacious information in her celebrated 1830 biography, Schiller’s Life, which chronicled the years that she, her sister, and Schiller spent together around the turn of the century. So she would likely be appalled by Beloved Sisters, which speculates—without much basis in fact, apparently—about what happened behind closed doors. Writer-director Dominik Graf, who’s worked primarily in television, has concluded, or at least opted to imagine, that the three engaged in a tempestuous ménage à trois, and his handsomely mounted, beautifully acted epic biopic (running just shy of three hours) succeeds in reducing the lives of three important figures in German literary history to a rather banal love triangle.

Schiller (Florian Stetter) had already achieved a measure of fame, thanks to his play The Robbers, by 1787, when the movie begins. Wandering the streets of Weimar, he’s given directions from an upstairs window by Charlotte von Lengefeld (Henriette Confurius), whose witty temperament matches his own. Charlotte speedily falls in love upon encountering him again, but it takes some time to persuade her mother (Claudia Messner) that it’s worth marrying this shabbily dressed, penniless poet, rather than some rich nobleman. Charlotte’s sister, Caroline (Hannah Herzsprung), has already gone the latter route, in an effort to save the family from financial ruin, and is stuck in a loveless, sexless marriage. While vacationing one day at the Rhine Falls in Switzerland, however, Charlotte and Caroline make a solemn vow that they will always remain together, and will share everything. Complications inevitably arise when that involves sharing Schiller (Sharing Schiller would be the Hollywood title, no doubt), causing a rift between the sisters that at one point inspires Caroline to spend several years in self-imposed, heartbroken exile.

As with last year’s The Invisible Woman, which depicted the (much better documented) relationship between Charles Dickens and actress Nelly Ternan, there’s a certain Ye Olde Us Weekly element to a movie that’s primarily interested in the unconventional sex lives of famous dead folks. All three of the lead actors are terrific—Herzsprung makes an especially strong impression as the more fiery Caroline—and Graf, though no visual stylist, at least has a sharp eye for compelling period detail. (This film pays enormous attention to the number of blots that writing with quill and ink produced.) But the narrative’s slow progression from bliss to acrimony, as Schiller beds both sisters (never at the same time, pervs) but increasingly grows attached to the one he didn’t marry, feels a bit inconsequential. Caroline was also a novelist (Agnes Von Lilien), and Charlotte has been identified as the true author of several works previously attributed to Schiller, but while Beloved Sisters shows both women writing, the film is first and foremost interested in them as rivals for a great man’s affection, inexorably building to a big shouting match between them. Surely there must be tales from the 18th-century literary world less soapy than this one.