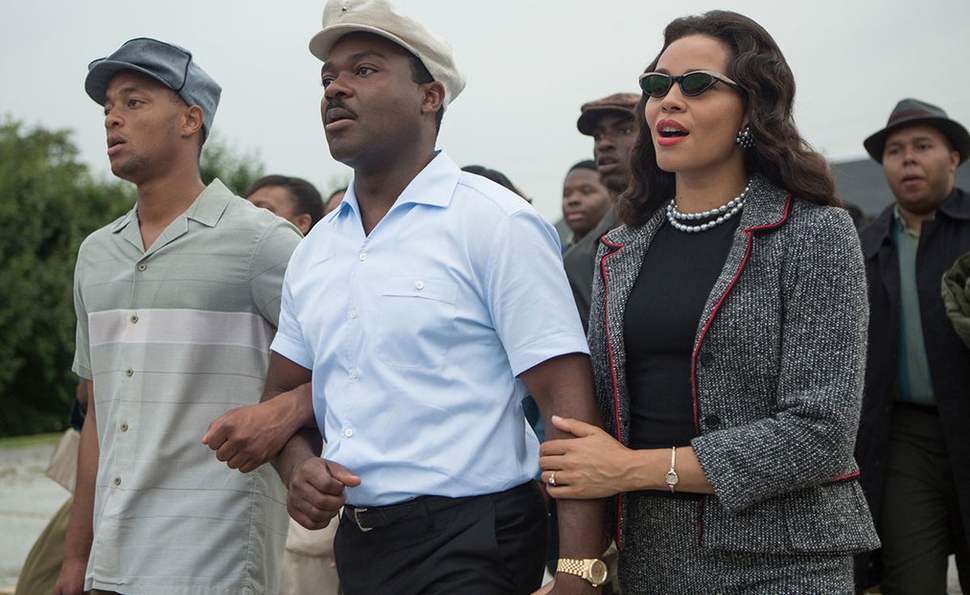 The estate of Martin Luther King, Jr. denied the makers of Selma the right to use any of his speeches, which seems like a stumbling block for the first big-screen biopic about the civil-rights hero, but is actually indicative of what’s so special about the film. The absence of King’s famous oratory requires a different entry point into his personal and political life, one that takes the film away from the expected Hollywood “Great Man” treatment and into a thornier, more complex, enriching treatment of a savvy leader marshaling the forces of history. Much like Steven Spielberg and Tony Kushner’s Lincoln, the brilliance of Ava DuVernay’s Selma lies in how it makes a man out of a historical icon without diminishing his greatness in the slightest. And just as the Lincoln in the earlier film engaged in horse-trading and power politics to get the 13th Amendment passed, the King of Selma is revealed as a tactician as much as an idealist, someone who understood how best to use activism to turn the legislative screws. His words inspired millions, but that was only half the job.

Selma passed several directors, from Stephen Frears to Lee Daniels, before finally reaching DuVernay, who won a directing prize at Sundance for her acclaimed low-budget drama Middle Of Nowhere, but had never attempted anything on this scale. It’s absurd now to think of anyone better-suited to the film than DuVernay, who threads a thin needle between the sweep of a Hollywood production and the intimacy of her independent work, and who’s keyed in to the historical conversation taking place between then and now. With conservative states like Texas enacting voter ID laws to marginalize hundreds of thousands of black voters, DuVernay makes the connection by telling the story of King’s fight to protect black voting rights in the South. But she could not have anticipated the current outrage over the killing of unarmed black men like Michael Brown, Eric Garner, and Tamir Rice, and the aggressive stance a heavily white police force has taken against protestors, particularly in Ferguson, Missouri. There are times when Selma seems to speak so directly to recent events that it’s as if the speeches were being live-dubbed in the theater. History repeats itself, and DuVernay’s ground-level biopic feels the tremors.

It isn’t entirely right to call David Oyelowo’s performance as King self-effacing, given Dr. King’s place in the center of the Civil Rights movement, but it’s on a human scale, with nothing like the cartoonish bluster occasionally broached by Tom Wilkinson’s LBJ or Tim Roth’s George Wallace in the film. Starting after the passing of the 1964 Civil Rights Act, which ended segregation in the South, Selma focuses on the discriminatory practices still in place, and the efforts of King and other members of the Southern Christian Leadership Conference to continue the movement. Having passed the Civil Rights Act, LBJ reacts furiously to King’s demands to spend more political capital on the movement’s behalf, so King takes the initiative by heading into the lion’s den and choosing small-town Selma, Alabama as a base of operations. Their first attempt to march peacefully from Selma to Montgomery leads to the infamous bloodbath on the Edmund Pettus Bridge, when local police beat the protesters with nightsticks and whips. As King works to keep the movement going and turn public opinion to its favor, the government quietly attempts to undermine him at home through surveillance.

Working with the great cinematographer Bradford Young (Ain’t Them Bodies Saints, A Most Violent Year), DuVernay stages well-known public events like the “Bloody Sunday” march with scrupulousness, scope, and a gut-wrenching visceral power. But Selma’s true success is as a chamber piece, not a thundering historical epic. DuVernay, who did an uncredited overhaul on Paul Webb’s original script, excels at imagining intimate scenes of great importance, like King’s dealings with LBJ in the Oval Office, the oft-contentious strategy meetings within his inner circles, and his private troubles with Coretta Scott King (Carmen Ejogo), who confronts him about his infidelity. All these scenes inform and enrich the action once it moves to the public stage, like all the contentious rewrites and rehearsals that make a première possible. DuVernay understands deeply how all these aspects of King’s life operated in unison to make him a courageous, disciplined, principled leader. And she understands even better how the movement didn’t end with him.