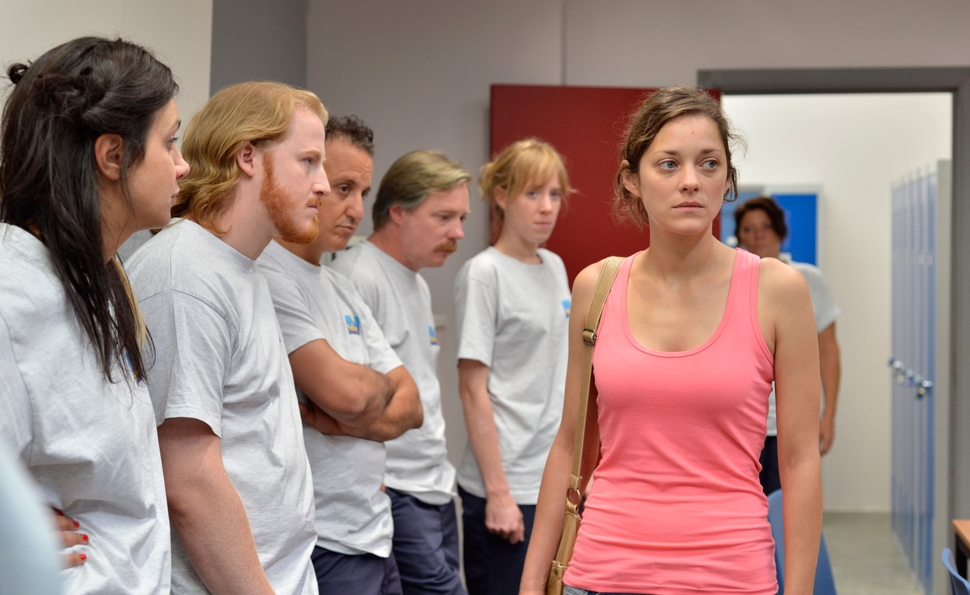 Empathy and self-interest have duked it out in many of the Dardenne brothers’ films, but the choice has never been quite so stark as it is in their latest masterwork, Two Days, One Night. Just before the film begins, 16 employees of a solar-panel factory are forced to choose between receiving their annual €1,000 bonus or forgoing it so that Sandra (Marion Cotillard), a co-worker who’s been on a leave of absence while battling clinical depression, can be rehired. Just about everyone opts for the bonus, but charges of voter intimidation by the company foreman, Jean-Marc (Olivier Gourmet), result in plans for a second, secret ballot, scheduled for Monday morning. That gives Sandra the weekend to persuade at least nine of her peers to give up a sizable chunk of change for her benefit. At the urging of her husband, Manu (Fabrizio Rongione), she decides to visit each and every one of them in turn, asking for their support.

So begins an odyssey that, while never leaving a single small Belgian city, will cover just about the entire spectrum of human nature, at least as it relates to this particular moral dilemma. Some have complained that Two Days, One Night feels uncommonly schematic by the Dardennes’ standards, and it’s true that the film has a rigid structure, setting up its scenario at the outset and then just following Sandra from one encounter to the next. But while Sandra’s spiel is more or less identical each time, no two responses are the same. One woman won’t even come to the buzzer, audibly instructing her toddler-aged daughter to tell Sandra she isn’t home. A man who refuses, saying he badly needs the money, nonetheless provides her with the addresses of others, knowing that he’s potentially jeopardizing his bonus by doing so. In the most affecting scene, a soccer coach collapses in tears upon hearing Sandra's request, begging her to forgive him for having voted selfishly the first time. A fight breaks out. A marriage ends. One guy genuinely isn’t home.

Throughout it all, Sandra does her best to keep it together, which is no easy task. Even for someone in top emotional shape, spending an entire weekend asking lower-middle-class workers to relinquish their bonuses on your behalf would be daunting. For Sandra, who’s constantly popping Xanax to keep herself from sliding into a pit of despair, it’s akin to climbing Mount Everest with a refrigerator strapped to her back. Cotillard plays her not as a Norma Rae-style go-getter, but as a fragile, damaged woman who simply has no choice but to try. And the Dardennes, as if concerned for their protagonist's psyche, hang back a bit with their camera, rather than keeping it constantly glued to the back of her head. Two Days, One Night is so emotionally direct—especially compared to previous Dardennes films like The Son and Lorna’s Silence, in which the characters’ thoughts are often a mystery—that elegant simplicity is the best visual approach.

Last week, Cotillard’s performance as Sandra was cited by The Dissolve as one of the year’s very finest. That’s hardly surprising, not just because she’s superb, but because she’s in virtually every frame—the entire movie is told exclusively from Sandra’s perspective. At the same time, however, what makes Two Days, One Night so special is that it doesn’t feel like a character study of a specific individual, even though Cotillard makes Sandra distinct and unforgettable. Thanks to the Dardennes’ generosity of spirit and the work of a superlative (and ethnically diverse) supporting cast, its overall effect is more all-encompassing. It’s a film that captures humanity at its best and its worst, sometimes simultaneously. Nobody is a hero, though some people act heroically; nobody is a villain, though some people have closed themselves off. Sandra herself is both defeated and persistent, which qualifies as a definition of what it means to be alive, knowing full well that the grave awaits. Does she get her job back? That question is decisively answered—no cute ambiguity here—and the Dardennes come up with a bitter twist that few would anticipates. But the glory of this deeply compassionate triumph is that it doesn’t matter. Only the will to fight matters.