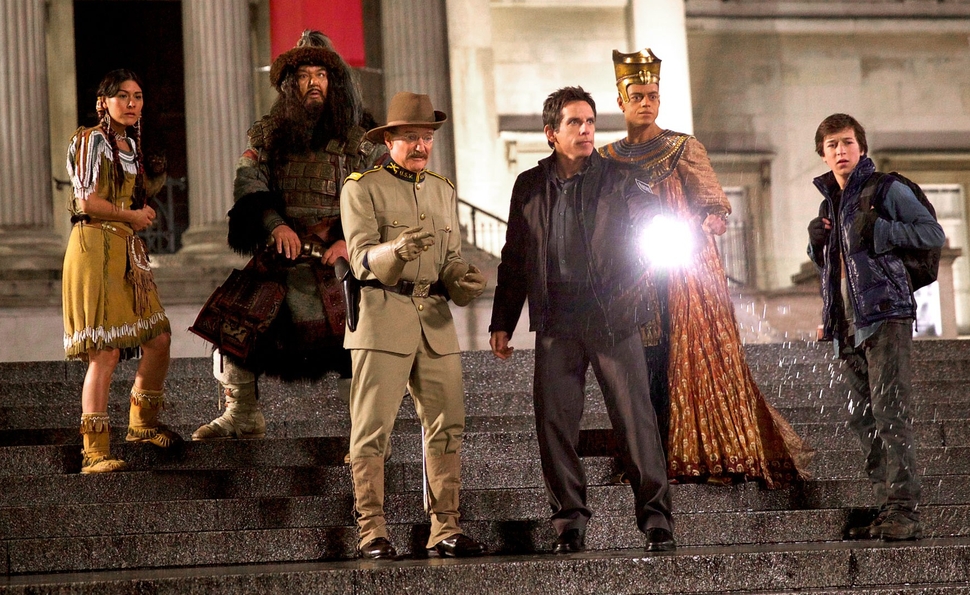 Night At The Museum: Secret Of The Tomb

As last roles go, there are worse ones to play than Teddy Roosevelt. But there are no worse movies in which to play Teddy Roosevelt than the Night At The Museum series. Robin Williams had completed his work on the third entry in Shawn Levy’s spiceless history gumbo before committing suicide this summer. Night At The Museum: Secret Of The Tomb isn’t the last time Williams will be seen or heard onscreen: He also lends a voice to Terry Jones’ Absolutely Anything and stars in the indie drama Boulevard, both likely to release next year. But it is the last time his wonderfully elastic face will grace the kind of film that made him a household name: big-budget, effects-laden comic spectacle. And like too many of his efforts in this category, it’s junk.

It’s nice that Williams has an expanded role in the film, including a tender goodbye scene. Yet his presence is thankless: The wax Rough Rider replica recites plot points about curses and continues an icky romance with Sacajawea (Mizuo Peck). Even when there’s a malfunction in the device that gives him life and he starts reciting Franklin Roosevelt quotes, Williams stays on a tight leash, unable to put his magnificent gift for improvisation to use. Williams never gets to play Roosevelt, but worse, he never gets to play Robin Williams, either.

The first two Museum films were noisemakers masquerading as education advocacy. Ben Stiller’s security guard Larry played foster dad to figurines at the American Museum of Natural History and the Smithsonian Institution, where, thanks to a glowing Egyptian tablet, the exhibits came to life at night and destroyed everything in sight. The tablet’s sudden corrosion doesn’t seem like a problem; in fact, it feels more like a solution. No more live dinosaurs means no more property damage, right?

Alas, Larry feels he must save “everything that’s special about this place.” (Really, buddy? There’s nothing else special about the American Museum of Natural History?) So he flies to the British Museum in London, which holds the Pharaoh who was buried with the tablet, and his museum friends tag along—even the pissing monkey, which the film all but admits is there solely to pander. In London, the filmmakers recycle jokes and setups from the first two movies verbatim: they tame a doglike dinosaur, jump into a famous painting, and use the same closeup-wide-angle shot pattern to sell jokes about the pint-sized diorama cowboy and emperor (franchise MVPs Owen Wilson and Steve Coogan). Even for the third entry in a family franchise, the construction is lazy to the point of indifference.

Amy Adams, whose brassy Amelia Earhart in Battle Of The Smithsonian was the franchise’s lone bright spot, is absent this go-around. In her place are three new forgettable faces: Rebel Wilson as a security guard who says inappropriate things, Dan Stevens as the pompous knight Sir Lancelot, and Ben Kingsley as a Pharaoh, mere weeks after playing a persecuted Jew in Exodus: Gods And Kings. The timing makes the film’s best line even funnier: Upon learning of Larry’s Jewish roots, Kingsley says, “We loved Jews. We owned about 40,000 of them.”

A child has every right to enjoy a silly film about a museum, but these movies could and should have been smarter. Teddy Roosevelt talks to Attila the Hun, for God’s sake. May the kids who can’t pay attention for five minutes without Ben Stiller smooching a monkey one day develop the patience for a real museum—and for a better Robin Williams movie.

GoWatchIt: Buy. Rent. Stream Night At The Museum: Secret Of The Tomb