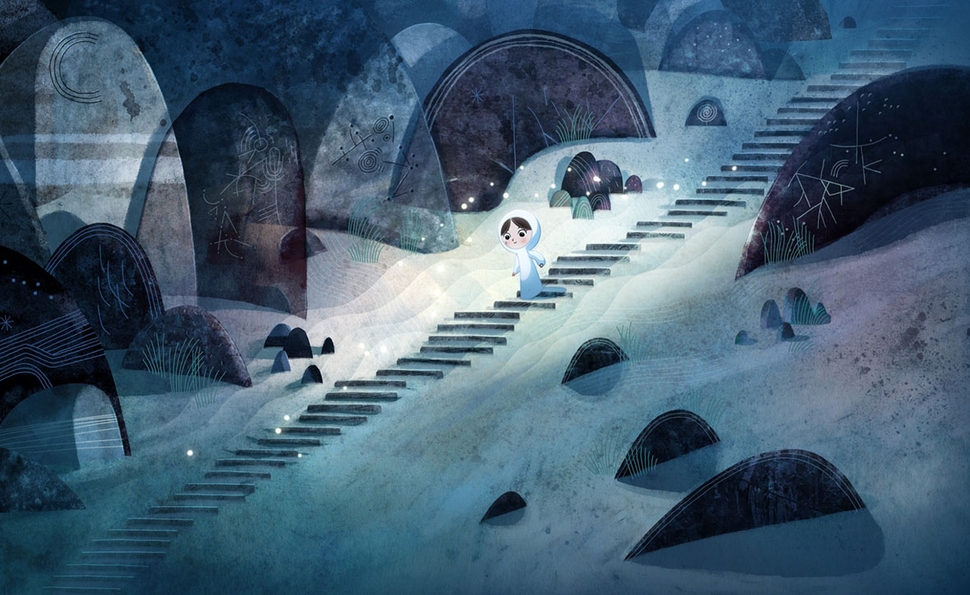 Animator Tomm Moore scored an unexpected Oscar nomination with his 2009 film The Secret Of Kells (co-directed with Nora Twomey), a beautifully illustrated story drawn from Irish history and mythology. Moore’s follow-up, Song Of The Sea, is even lovelier, and more personal. Returning to Irish folklore, Moore explores the legend of the “selkies”—creatures who exist as seals in the ocean and as humans on land. Moore also shares some of his memories of growing up in Kilkenny in the 1980s, and being a boy who saw potential adventures around every corner. Song Of The Sea is a film that recalls what it’s like to be at at that exact age of childhood where family traditions start to matter, and where no plan seems impossible for a kid who’s smart and brave.

Child actor David Rawle (best known for Chris O’Dowd’s sweet British sitcom Moone Boy) provides the voice of Ben, a grade-school-aged boy who lives in a lighthouse with his mute 6-year-old sister Saoirse and their hulking, depressed father Conor (Brendan Gleeson). Ben resents Saoirse because he holds her responsible for the death of their mother Bronagh (Lisa Hannigan). He won’t share with her anything that their mom left behind, and won’t even let his shaggy dog Cú play with her. But when Ben and Saoirse are taken to the city to live with their grandmother (Fionnula Flanagan), he has to rely on her mysterious connections with the spirit world to help guide them back home. Gradually, Ben comes to realize that Saoirse may be a selkie—and that Bronagh may have been one as well.

On a narrative level, Song Of The Sea is in line with classic children’s adventure stories. Ben and Saoirse journey from the city to the country, following paths that look ordinary but detour through magical realms. They encounter faeries, hairy wildmen, frozen immortals, and predatory owls who do the bidding of a misguided witch named Macha (also voiced by Flanagan, tellingly). Ben has two goals: to reunite Saoirse with the selkie coat that will keep her alive, and to help the ancient giant Mac Lir (voiced by Gleeson), whose grief has transformed him into a remote, immobile island. Along the way, he learns to appreciate his sister, and finds new meaning in the bedtime stories his mother used to tell him.

But Song Of The Sea’s plot is only about 25 percent of what makes it special. As with The Secret Of Kells, Song Of The Sea is a triumph of design and animation, populating lavishly detailed, patterned backdrops with characters so simplified that they could’ve been cut-and-pasted from a newspaper comic strip. Moore produces some astonishing effects with this technique. On first impression, Song Of The Sea looks as simple as a picture book. Look closer, though, and there’s a lot more subtlety and range of movement to Ben and Saoirse than is immediately apparent, and often a lot to see in those backgrounds. A typical pan across the countryside reveals towering power lines, banks of dark clouds, a family of animals nestled in an underground warren, and more. Moore also employs an understated motif of swirling, circular lights, giving the whole movie both an illuminated quality and a sense of cyclicality.

Some of mythology in Song Of The Sea gets too wonky, and though the movie is packed with colorful characters, the actual story is a little straight and narrow. But just as the tales of Mac Lir and Macha serve as a parallel to Ben’s father and grandmother, so Song Of The Sea is both a fantasy and a reminiscence. Moore sets the film at Halloween, and sees everything through Ben’s eyes. Sometimes that means imagining a reality where roving bands of costumed kids could actually be supernatural. And sometimes that means recalling the fierce whip of an ocean wind, or the way a big dog’s fur flops over its eyes, or how a father’s embrace can feel like being swaddled by a pillowy mountain.