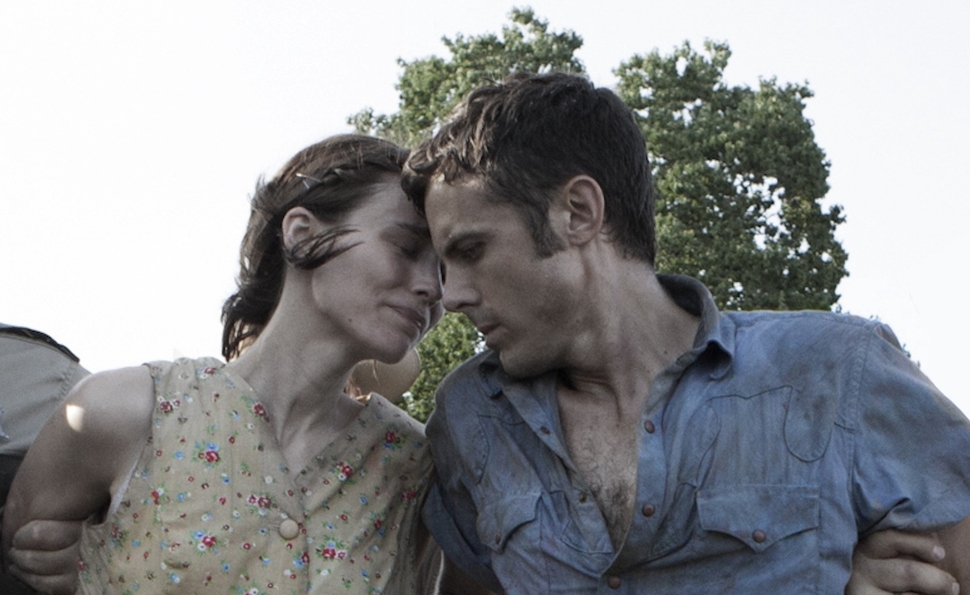 At a certain point in Robert Altman’s 1974 film Thieves Like Us, life on the lam starts to look indistinguishable from a state of grace. Keith Carradine plays Bowie, a young bank robber in the 1930s who fell into a life of crime before he really had any other choice. After getting injured on the job, he’s cared for by Keechie (Shelley Duvall), a gas-station attendant’s daughter. While he recuperates, they listen to the radio and fall in love in scenes Carradine and Duvall play as the first carefree moments either of their characters has enjoyed. But like all states of grace, it isn’t built to last, and however innocent Bowie seems during their back-room idyll, his occupation makes a happy ending impossible.

Carradine is on hand as a different sort of criminal in Ain’t Them Bodies Saints, the second feature from writer-director David Lowery (after 2009’s St. Nick). Carradine plays Skerritt, a grizzled eminence who keeps a hardware store as a front for his illegal operations. Looking dignified but worn, he’s a man grown canny, if not wiser, with the passing of the years, and one for whom disappointment has lost its ability to shock. But even without Carradine, Ain’t Them Bodies Saints would feel like a spiritual cousin to Altman’s film, beginning where Thieves Like Us ended, if that film had a slightly less bloody ending. Here, fate conspires to tear young lovers apart, but that’s the beginning of the story, not the end.

Set in small-town Texas some time between the Kennedy assassination and disco, the film opens with the first of several memorably sun-dappled scenes, as Ruth (Rooney Mara) and Bob (Casey Affleck), a pair of young criminals in love, first quarrel, then pledge their devotion to each other shortly before Ruth reveals she’s pregnant with Bob’s child. All they need is to get through another big job, and they’ll be set. But the job doesn’t go as planned. They lose their partner, Skerritt’s son, in a shootout during which Ruth wounds Patrick (Ben Foster), a young police officer. With no escape in sight, Bob surrenders and takes the blame for the shooting. As the police haul the lovers away, Ruth and Bob lean hard against each other, as if it’s the last time they’ll ever touch.

Whether they will is the engine that drives the film, but not the whole of it. From prison, Bob writes Ruth impassioned letters, first about his need to be with her again, then about his desire to see the daughter he’s never met, always making clear that he’ll be coming back to them the first chance he gets. And in time, he does get his chance and starts to make his way back. But over the course of Bob’s journey, it becomes clear that any suspense in Ain’t Them Bodies Saints won’t come from whether Bob will make it home, but from what he might find if he does. And though Lowery divides the film’s time between Bob and Ruth, who’s spent the years raising their daughter and moving away from the wild behavior that got them in trouble, the film avoids answering that question as long as possible.

For all its echoes of Altman—which later extends to a chillingly matter-of-fact approach to violence reminiscent of McCabe & Mrs. Miller—Ain’t Them Bodies Saints draws just as heavily on Terrence Malick for its look and tone. But the film isn’t merely aping a master. Cinematographer Bradford Young knows his way around magic hour, but also how to create eerie contrast between beams of sunlight as they penetrate, but never illuminate, gloomy interiors. The yearning of Bob’s letters home, which Lowery renders into voiceover narration, resembles Malick more than a little, too. But the film also questions that yearning. Bob’s love for Ruth sustains him, first in prison, then on his hard voyage home. But for Ruth, it appears to have a different effect, drawing her back into a life she might be better off leaving in the past. Whether Ain’t Them Bodies Saints will portray how love triumphs over all, or how love fades with time or changes with circumstance, is another question the film puts off answering as long as possible.

Lowery is able to sustain that suspense in part thanks to Mara’s elusive, measured performance. Openhearted and passionate as the film begins, Ruth turns inexpressive and withdrawn, never letting what she’s thinking become a matter of public concern. She’s a tough read, and most people around her seem content to leave her alone—except Patrick, whose awkward, persistent half-courtship is partially informed by the suspicion that she’s the one who shot him years ago. It’s a sweet infatuation that Foster suggests beautifully, but also one with potentially tragic repercussions, should Bob make it home. Though Affleck rarely raises his voice, he plays Bob as a man passionate and strong enough to burn anyone nearby.

While virtually every shot looks like a work of art, much of the beauty of Ain’t Them Bodies Saints comes from Lowery’s refusal to choose sides. Bob tells himself a story of the way things ought to be, and someday will be; then he decides to follow it to the only conclusion he can allow himself to imagine. But there’s a bigger story going on around him, one in which characters change, the world shifts, and the sun that casts such a beautiful light at magic hour eventually sets, compelling everyone to seek shelter and light where they can find it.