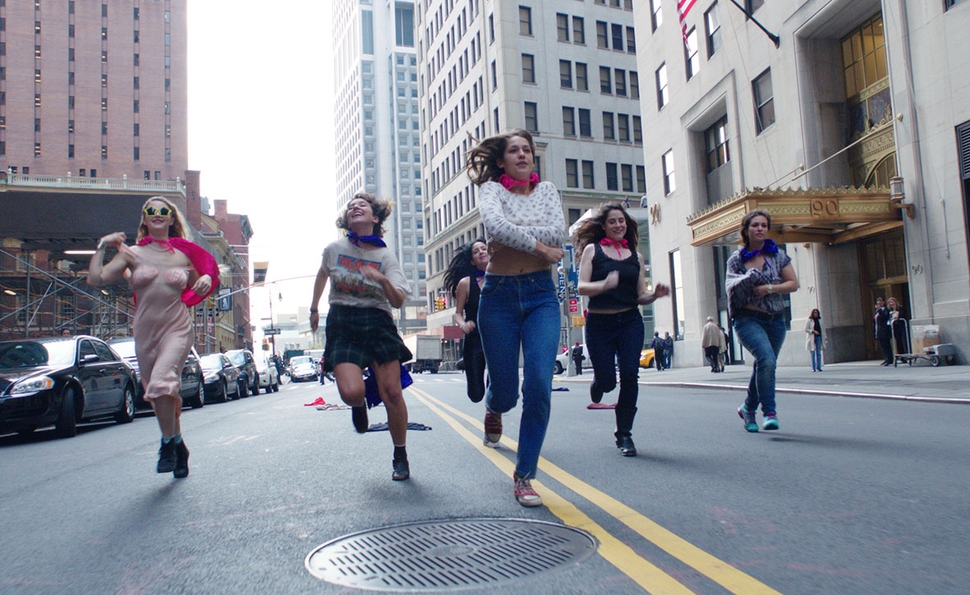 Lina Esco’s occasionally charming and infrequently daring Free The Nipple opens in an appropriately bouncing manner, with a loose collective of women bounding down a city street, gleefully stripping their top halves bare to reveal their breasts (and some colorful capes), much to the shock and chagrin of passersby. Amusingly enough, this first glance at the bountiful bodies that Free The Nipple puts on bold (but never exploitative) display comes complete with the kind of blurs viewers might normally expect to see on a particularly salacious reality television program. The message is clear: Even in a film about freeing the nipples—any nipples, all nipples—mass quantities of boobs are taboo and require coverage.

Esco herself soon appears in the frame—not topless, not caped, but outfitted with thinky-person glasses and a slick camera. For her directorial debut, the indie actress is pulling double duty, directing the film and starring as a waylaid wannabe journalist named With. Although she’s not a member of the bare-breasted posse, the budding stringer senses a story worth sharing, and she soon starts snapping away, eager to mine the movement (and its daring leader Liv, played by Lola Kirke) for a story that will put her fledgling career on the map.

With isn’t interested in bearing her boobs. Until she is. She’s also not interested in being an activist. Until she is. She’s only in it for the story, not to get personally engaged with her subject. Until, yes, no surprise, she is. With’s rapid and multiple changes of heart fly fast and furious in the film’s first act, making it difficult to get a handle on either her motivations or her basic character. With may be the film’s central character, but we never really know her, a misstep that muddies the film’s first act. It never gets any clearer.

With’s attempts at documenting and reporting the nipple-freeing movement prove to be spectacularly unfruitful, and although it’s never revealed what she attempted to write about Liv’s ideas and experience, it quickly becomes apparent her interview skills are lacking and her ability to hold a camera steady is similarly dire. With really isn’t suited to be a reporter, and when her company cuts her loose because of her shoddy work, she apparently has no other choice but to join the movement—and hook up with Liv—and try to make a go at activism, the exact thing she swore off just minutes earlier.

The movement’s aims remain confoundingly obtuse throughout the film. Early on, Liv expresses a desire to bring equality to the world by allowing women the freedom to express their sexuality as they see fit, though With increasingly points to the evils of censorship as the campaign’s principal target. It’s a heavy-handed idea, one driven home by often uncomfortable scenes, including an uninspired bit that focuses on With as she watches live coverage of The Dark Knight Rises theater shooting while pondering why women can’t expose their breasts whenever they want, and why we live in a culture that embraces violence for its entertainment value, but balks at similarly portraying sexuality and the beauty of the human form. It’s this sort of formless, idealistic activism that streaks through Free The Nipple, never letting up in order to give its ideas or its characters any kind of workable direction. Both the film and the movement it chronicles feel doomed to fail.

The newly joined duo soon recruit a fresh pack of similarly minded ladies and set about turning their movement into something viable. Personal feelings threaten the well-being of the organization, and although the cause is a mostly niche one, Free The Nipple finally finds its footing when it attempts to illuminate the problems that plague any small and plucky grassroots organization. The group’s aims are never expressly clear, its ideas are generally bad, its finances shabby, and it’s mostly disorganized, all of which contribute to the overall shagginess of the film.

But while this may be reflective of true-life political movements, it sets Free The Nipple on a ragged path that never really gets anywhere. The plucky DIY spirit that pervades small-scale organizations might work when it comes to launching movements in real-time—and Free The Nipple ideals have already bled over into the non-cinematic world—but it makes for a slapdash and slippery movie experience that never comes together, ultimately leading up to a finale that is embarrassingly devoid of anything resembling a conclusion.

Yet there’s an infectious energy all the same, one bolstered by a zippy and hip soundtrack and the charm power of Esco and Kirke, who both possess an instant appeal that pops right off the screen. Esco unwisely pulls back on making their political crusade a more personal one, burying one of the film’s most unexpectedly delightful turns just as its about to flourish. For a film about letting loose and flying free, Esco’s film remains stubbornly dedicated to a mostly shapeless cause that embraces freedom just as it should be exposing itself outright.