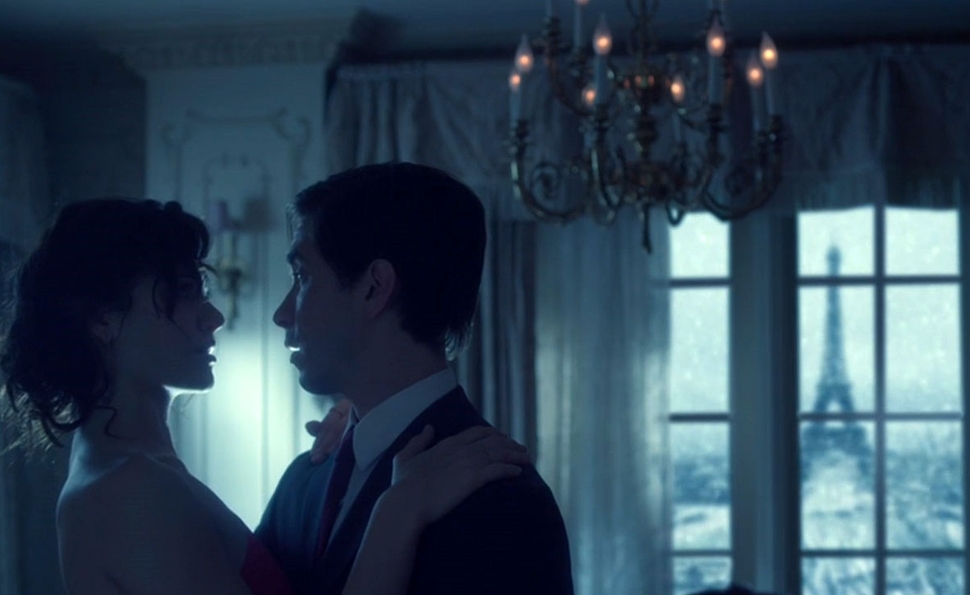 According to the Hotel-Chevalier-yellow opening title card, Sam Esmail’s Comet is set “a few parallel universes over.” That explains the often-lovely astronomical irregularities: a vivid meteor shower, a twin sunrise over the Hollywood Hills, a slowly rotating nebula in the window of a train gangway door. But the world of this film—in which a particularly toxic form of nerdy male entitlement is deeply, irresistibly romantic—is surely more than just a few parallel universes from our own. No amount of cosmic fireworks or woozy strings can hide the nice-guy passive-aggressive bullshit squatting at the center of Comet—it’s like a dreamy, swoony De Beers ad that stars Cecil Rhodes.

Comet cross-cuts between several crucial moments in the relationship between Dell (Justin Long—yes, this is the kind of movie where the Mac guy is named Dell) and Kimberly (Emmy Rossum). Dell works in pharmaceuticals and is really, really smart. We can tell, because Kimberly tells him, “You were really, really smart”—but also because he does things like call up his girlfriend to talk about how The Selfish Gene is a metaphor for their relationship. (The fact that she’s singing along to Roxette instead of listening somehow makes this worse.) Dell is the kind of guy who’s so cultured, he can quote Sartre in the middle of a breakup. (Guess which quote.) But—and this might be related—he’s also the kind of guy who sees the world as a battle between good-looking men and smart guys like him, in which his only tools are his sardonic wit and his sense of grievance, and women like Kimberly are the prize. In the film’s second scene, Dell becomes enraged at the inane conversation the man behind him in a line is having, and even angrier because he’s there with a beautiful woman he surely doesn’t deserve. Here’s just part of what Dell tells this complete stranger, the familiar refrain of nice guys the world over who wish women would just stop being so darned superficial:

The difference between this scene and the version in Annie Hall is that Alvy Singer wouldn’t have tried to seduce the woman whose date was blathering on about Marshall McLuhan, because he understood that vacuous people usually date other vacuous people. (He makes that point in Annie Hall, in fact.) Dell is sure Kimberly is an unwilling hostage, though, and goes to great lengths to free her from her own bad choices. Over the course of the evening they meet, he asks her whether she has an eating disorder, chases her across the Hollywood Forever Cemetery, tells her she has terrible taste in men, physically blocks her from walking away from him several times… and wins her heart.

But where’s Kimberly in all this? It’s hard to know for sure, because she barely does anything except react to Dell. The sole clues to her life outside the relationship are a phone conversation that takes place while she’s driving to a gun range, and a shot of her “thesis,” a glossy trade-paperback-ish book titled The Art Of Science, with the pages filled—at least from Dell’s perspective—with random strings of letters. Viewers don’t get to know much about what she does or cares about or wants, but they do know she isn’t as smart as Dell, because he’s constantly correcting her. She thinks MacGyver was a detective. She’s never heard of Zelda Fitzgerald. Oh, and she wants a baby, a bombshell she drops out of nowhere: “I’m a girl, so yes, we non sequitur.”

There’s no way to sell this sort of garbage, but everyone involved tries valiantly. Cinematographer Eric Koretz in particular uses every trick imaginable, framing characters dramatically off-center, playing with color grading, slow motion, and lens flares—it’s a campaign of distraction, and sometimes it succeeds. Esmail’s script, besides toying with the idea that the entire film could be a dream, or the thoughts of a dying man, has moments that seem specifically designed to forestall criticism. But Dell isn’t any less of a narcissist just because he knows he’s a narcissist, any more than a line becomes less of a cliché when a character immediately says it’s on-the-nose. There’s a brief moment of hope when Emmy Rossum scoffs, “You think you’ve won me.” It seems like she might question Dell’s premise, that she’s a reward he can earn if he just tries hard enough, while never taking no for an answer. Then she says, “You think you’ve won me already.” Try harder, Dell!

The creepiness at the heart of movies like this has never been a secret; it’s been a joke for at least 15 years. It’s appealing to think romance can be conquered with the kind of Dale Carnegie salesmanship and ingenuity that American culture encourages citizens to use in matters of money. (The sad joke is that this not only doesn’t win anyone love—it doesn’t even make anyone rich.) There are great, even romantic films that dive into these uncomfortable backwaters of America’s relationship with romance—for one example, see Punch-Drunk Love. Comet’s creators clearly have, because they lifted the restaurant-bathroom scene nearly word-for-word. But P.T. Anderson’s film is clearly showing a gesture of impotent rage from a man who’s been sold a bill of goods—Comet is more interested in doing the selling. There’s no equivalent of Punch-Drunk Love’s amazing scene in which Barry and Lena exchange endearments like, “I’m looking at your face, and I just want to smash it. I just want to fucking smash it with a sledgehammer and squeeze it, you’re so pretty.” But that anger is fizzing away, unexamined and unacknowledged, in nearly every frame.