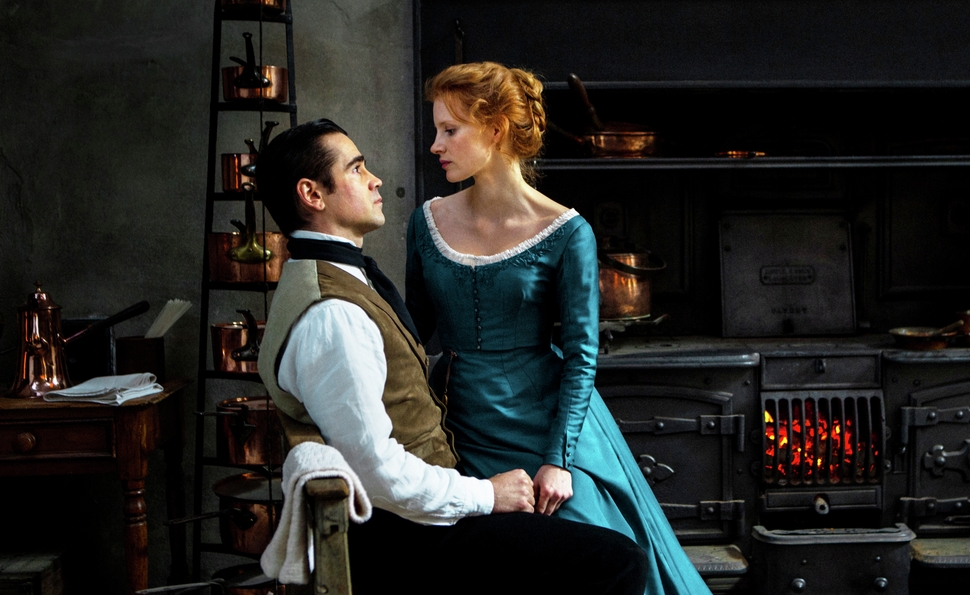 Jessica Chastain, Colin Farrell, and Samantha Morton are talented, charismatic actors, and Liv Ullmann is a theater- and cinema-trained actress/director who’s worked with geniuses in both disciplines. August Strindberg is the most important Swedish writer of the 19th century, and his 1888 play Miss Julie is a classic that’s been staged and adapted repeatedly for over a century. So why don’t all these formidable people work well together? Why does Ullmann’s new film version of Miss Julie feel so inconsequential?

Ullmann directed and wrote the script for the latest Miss Julie, which moves the action from Sweden in 1888 to Ireland in 1890, but otherwise stays fairly faithful to Strindberg. Chastain plays Julie, an aristocrat’s daughter who’s alone on her family’s country estate one midsummer night with the handsome valet Jean (Farrell) and Jean’s girlfriend Kathleen (Morton), the family’s cook. Julie has often teased and flirted with Jean, but on this night, she pushes the game too far, and the two end up in bed together. Before the sex, Julie and Jean banter about class and values. Afterward, they keep talking, debating whether either of them is free enough to pursue any kind of future together. In the process, the power dynamic between the two of them shifts, with Jean no longer feeling so beholden to his mistress’ whims.

Strindberg wrote Miss Julie as a way of speaking directly about how the social order was changing as the 20th century approached. Adopting the principles of naturalism, Strindberg kept the plot, setting, and characters in Miss Julie to a minimum, in order to put these three representatives of modern life—Julie, Jean, and Kathleen—under intense scrutiny. Strindberg meant to expose something harsh but true about situational morality, and the symbiotic relationship between the lordly and their servants.

Because Ullmann doesn’t update Miss Julie’s setting, she also doesn’t update the theme. That’s a choice that raises some important questions, for both the director and the audience. Is this production meant to be a true period piece, capturing both the time in which the characters lived and the theatrical conventions of its era? Or is it meant to show the past as it really was, and to connect it to the way human beings behave in the present?

This Miss Julie seems to lean more toward the latter. For example, immediately after Julie and Jean’s tryst, Ullmann shows Julie in bed, where she frantically and vainly tries to clean the sheets between her legs, before slowly and painfully getting up and hobbling downstairs. That’s a bit of acting and directing that feels modern. It’s matched throughout the first half of the film by moments in which Jean speaks with open wonder and lustiness about how Julie likes to watch dogs in heat, and how she uses vulgar language with her friends. The sexual frankness is taken from Strindberg’s play, but the performances here go a little deeper into the innuendo.

The problem is that as played by Chastain and Farrell (or perhaps as directed by Ullmann), the sexual tension comes off as intellectualized, not actual. The early scenes of Miss Julie are just a few degrees away from some soft-focus 1970s European smut film, and the movie might’ve had more oomph if Ullmann had just gone all the way with it and made something lurid. Instead, the film lacks both the mannered restraint of 19th-century theater and the cheap thrills of sexploitation.  Ullmann’s Miss Julie is as dominated by long speeches and conversations as Strindberg’s, but those scenes don’t play as well when the two would-be lovers are sidling up to each other in close-up, practically panting.

That’s why the best moments in this Miss Julie are the ones where Ullmann lets the pictures tell the story, like when she watches Julie stroll commandingly across the grounds and into her empty mansion. Too much of Ullmann’s film feels like a social commentary being delivered more than a century too late. But when Chastain’s Julie dares Farrell’s Jean to damn propriety and follow her upstairs, and he refuses, her long, lonely walk up the steps is as poignant in 2014 as it would’ve been in 1914.