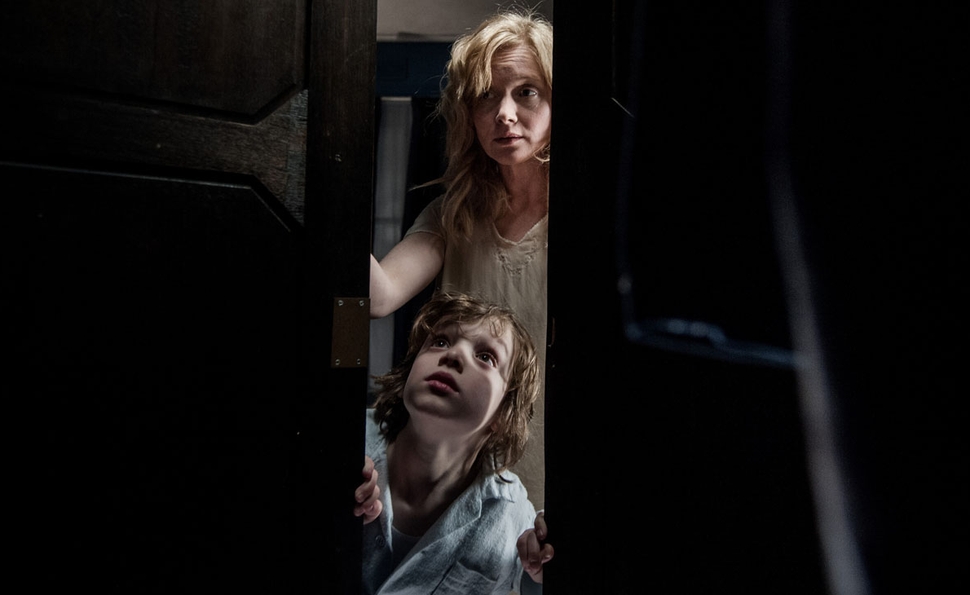 Among the gallery of horrors in Jennifer Kent’s unnerving debut feature The Babadook—an old dark house, a creature born from the pages of an ominous pop-up book, shocking and unexpected spasms of violence—the true wellspring is a woman’s ambivalence at being a mother. The roots of that ambivalence are explained: Seven years earlier, her husband was killed in a car accident while rushing her to the delivery room, so her son’s birth naturally gets associated with grief, trauma, and loss. But it’s nonetheless socially unacceptable, relegating her private shame and hostility to a domestic life that crackles with tension even before  a specter appears. It’s rare for popular fiction of any kind to acknowledge that parents sometimes don’t like their children, or don’t like being parents—We Need To Talk About Kevin, the book and the film, had a startling impact to that effect—but making it the engine for a straight-up horror film gives The Babadook a richness and emotional depth far beyond mere atmospheric shocks. These are real-life feelings intensified.

In truth, the relationship between Amelia (Essie Davis), a stressed-out elder-care nurse, and her volatile 6-year-old son Samuel (Noah Wiseman) is more complicated in its bonds and discord. Samuel clings to his mother at home, diving into her bed at night for comfort, and vowing to protect her with a series of alarming homemade weapons and booby traps. Amelia tries to defend him from concerned school administrators and fellow parents who don’t feel comfortable having their kids around him. At the same time, his misbehavior makes her bleary and fearful, and she plainly hasn’t stopped associating his birth with her husband’s death. One night, Samuel curls up with Mr. Babadook, a pop-up storybook about a dark, squat, top-hatted creature who arrives with a distinctive series of knocks and doesn’t go away once he’s been invited in. The book ends abruptly, with unfinished pages, and the rest of the story becomes terrifyingly interactive.

Kent’s debut feature combines the bumps and creaks of the classic haunted-house movie with the visceral kick of Australian exploitation films, creating an atmosphere that’s both heightened with dread and charged with the possibility of emotional and physical violence. The house has the pallor of an overcast day, a dingy reflection of Amelia’s mental state, and the addition of The Babadook just manifests the ugly feelings that already reside within its walls. Kent homes in on primary fear centers: The mythology of dark fairy tales, which can flower in a child’s imagination, and the uncertainty of being a parent, which can wreak havoc in the minds of sleep-deprived adults. It would be enough for The Babadook to get by on scares alone—the eponymous spook is eminiently franchise-able—but Kent doesn’t give the audience that kind of distance. Her agenda is more personal.

If anything, the one flaw in The Babadook is that Kent makes the parenting allegory too obvious, limiting the otherness of the threat. The tension between Amelia and Samuel, and their toxic codependency, are so much the DNA of the Babadook itself that it occasionally becomes too symbolically loaded, like the “Monsters From The Id” in Forbidden Planet. But that’s a minor complaint considering Kent’s ambition to make The Babadook more than just the sum of its shivers—and even more minor considering that The Babadook is scary as hell anyway. One aspect of the creature is that once it’s invited in, it never goes away. There’s the expected confrontation and resolution in the film, but the sentiment stands. The fraught mood it evokes never settles. It lingers.