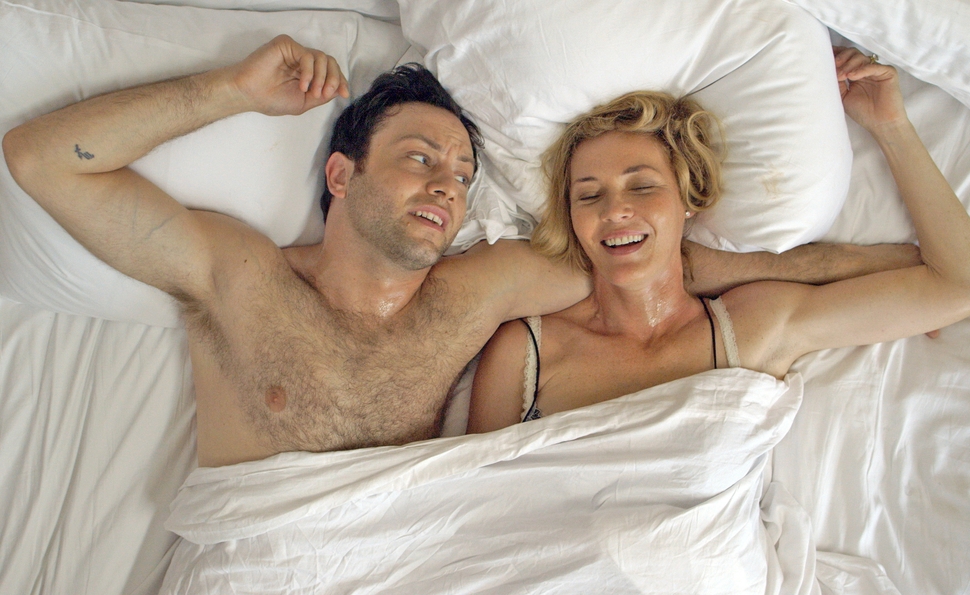 Romantic comedies live and die by likability, asking audiences to fall in love right alongside the clumsy (but plucky!) leading ladies and acid-tongued (but still gold-hearted!) tough guys who fill the big screen with their easily digestible stories. Characters can be prickly and heartbreak can happen, mistakes can be made and forgiveness begged for, but if a rom-com can’t genuinely endear itself to its viewership, even the best running-through-the-airport sequence will come up short. To accept a good romantic comedy, a real love story, audiences have to love the people who tell it.

Writer-director J.C. Khoury starts All Relative promisingly enough, with a downtrodden, slightly heartbroken leading man (Jonathan Sadowski) attempting to dip a toe back into the dating pool, aided and abetted by a goofy best pal (Al Thompson) and a pretty stranger from a local bowling alley (Sara Paxton). The pieces certainly aren’t unique to the genre, but the possibility for actual affection seems high, especially because Paxton’s Grace is charming enough to make anyone’s heart heal right up.

But All Relative isn’t interested in sticking with genre conventions, and Khoury soon starts layering on new, tonally imbalanced plot twists. Sadowski’s Harry, while enamored of Grace, is thrown off by her good manners: Basically, she won’t go on a date with him because she’s kinda-sorta dating someone else. Apparently dismayed that he’s met someone with a moral center—an odd personality quirk, made stranger by an early reveal that Harry himself has been cheated on, leading to his current emotional issues—Harry decides to drink away his troubles at an out-of-the-way hotel bar, where he meets the older, alluring Maren (Connie Nielsen). Inevitably, their bar-set flirting leads to a roll in the hay, and Harry appears to be finally getting his groove back.

Maren is initially presented as a progressive, forward-thinking influence, a modern woman unafraid to make her desires and needs known, and she and Harry seemingly enjoy some no-strings-attached sex. She even offers him advice as to how to woo Grace, advice far better than Jared (Thompson) suggesting Harry text Grace to inquire about the state of her underwear. It’s a fine arrangement until, of course, Maren bristles at Harry’s continued interest in Grace, nearly boiling bunnies in the process. It’s no sweat, though, because just as Maren goes cuckoo, Grace becomes single. Isn’t the path to love wacky and fun?

Improbably, Harry and Grace fall in love, giddily gallivanting around the city and participating in all manner of wacky rom-com delights, like giggling while eating hot dogs, and awkwardly pointing at obvious landmarks. Their fast-tracked relationship zooms right off into the country, when after less than a month together, Grace decides it’s time to meet the parents at their suburban home. All Relative is entirely built on the twist that follows, and even the briefest rumination on the film’s title should make what’s to follow crystal clear.

Khoury attempts to keep the film’s tone light while dealing with some hefty issues, from alcoholism to infidelity, and while a defter touch could have made the marriage between fizzy romance and domestic drama work, All Relative fails to engage because the emotional connection between all parties—Harry and Grace, Harry and Maren, Grace and Maren—is weak to nonexistent.

Nielsen, initially willing to get goofy and slapsticky as Maren, is soon tasked with drawn-out dramatic sequences that feel ripped from television movies, thinly written and laden with clichés. Even Sadowski, who’s understandably frantic and overly apologetic during the majority of the film, is unable to mine the material for new beats, and his performance never dares explore new territory. Worst of all, most of these people are just kind of awful—or, at the very least, wholly disinterested in other people’s feelings—and although Khoury tries to play his subject matter for laughs, the whole thing has an icky, invasive feel that would be better suited for a dark drama.

Paxton is the sole bright light in the increasingly uncomfortable and laughless outing, but even her charms don’t demand a traditional happy ending, simply because the best possible outcome seems impossible within the genre’s confines: If only all these people would simply step away from each other, they might let actual love blossom elsewhere.