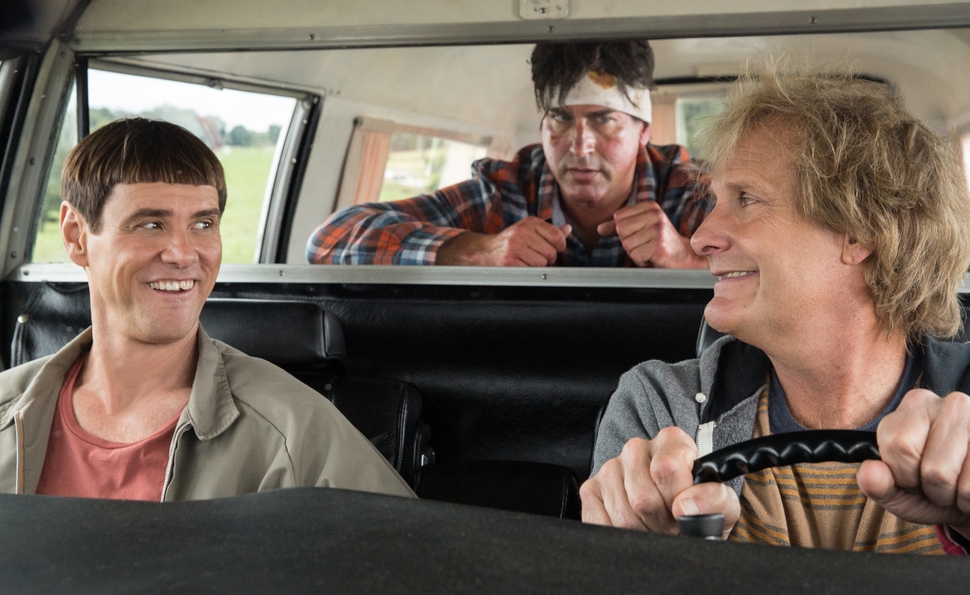 Dumb And Dumber To

Dumber And Dumber To opens with a gag illustrating that, even though 20 years have passed since we met the dull-witted duo of Harry and Lloyd in 1994’s Dumb And Dumber, nothing has changed. (That isn’t counting the 2003 prequel Dumb And Dumberer: When Harry Met Lloyd, because who wants to remember that?) Harry (Jeff Daniels) learns Lloyd (Jim Carrey) has been faking a mental breakdown for close to two decades, years in which Harry has been a frequent visitor and caregiver at Lloyd’s nursing home. Lloyd revels in the elaborate joke, even though, as Harry points out, it’s robbed him of his best years. Then they go home together to the same dumpy Providence apartment, where an image of Bo Derek in 10 still hangs on the wall. It’s as if time has stood still. (Well, apart from Harry’s new meth-cooking roommate.)

The film tries its best to stay on that message, too, sending Harry and Lloyd on a cross-country journey with more than a slight resemblance to the one they took in Dumb And Dumber 20 years ago. This time, it takes the form of a search for Harry’s daughter, the offspring of a one-night-stand with Fraida Felcher, a Rhode Island temptress mentioned frequently in the original film, but never seen. Here, they don’t recognize her because she’s aged into the middle-aged form of Kathleen Turner, whom the film treats as if she were a gorgon. That’s an uncharacteristically mean gag in an otherwise good-natured movie, and one of the few moments that throws off the balance between outrageousness and sweetness that’s been the key to Peter and Bobby Farrelly’s success for the last two decades. Harry and Lloyd can be as obnoxious and idiotic as they like, but they love each other, which makes even their grossest antics kind of charming.

But while the characters have stayed much the same, there’s no getting around the passage of time. When the Farrellys launched their careers with Dumb And Dumber, the film felt simultaneously old-fashioned and new, a big, unapologetically goofy physical comedy that looked back to classic film comedy for inspiration, even as it trafficked in gags that pushed the contemporary boundaries of good taste. The spirit made up for a lot of unevenness, including a thin kidnapping story that Dumb And Dumber used less as a plot than an excuse to get from one joke to the next. In the years that followed, the Farrellys turned into better filmmakers via sharper, more meaningful, if not exactly more mature films like Kingpin, There’s Something About Mary, and the underrated Stuck On You. Even on the heels of their unexpectedly funny 2012 revival of The Three Stooges, Dumb And Dumber To can’t help but feel like a step back.

The characters have similarly lost the element of surprise. It’s less of a shock to see the depths to which handsome leading man Daniels will go to humiliate himself in the name of comedy, and less disarming to see Carrey launch a full, unfiltered, manic assault from his first scene to his last. Even though Carrey doesn’t slow down—there’s a moment with a hot dog that belongs on any future Carrey highlight reel—Dumb And Dumber To does hit the brakes, and a bit too frequently for its own good. As they make their way to a TED Conference-like gathering of the world’s greatest intellects, Harry and Lloyd’s prank war against a villainous chaperone played by Rob Riggle never gains momentum, and the climax alone feels feature-length.

There’s a lot of dead time between inspired bits, but there are some pretty inspired bits, like a beautifully executed gag in which the heroes turn a bicycle-built-for-one into a bicycle-built-for-two, and some clever callbacks to the original film. But even at its best, the film plays like the comedy equivalent of a legacy act reuniting for a tour fueled more by nostalgia and goodwill than inspiration. It’s less sequel than encore, and it’s probably time to turn on the house lights and close this buddy act.