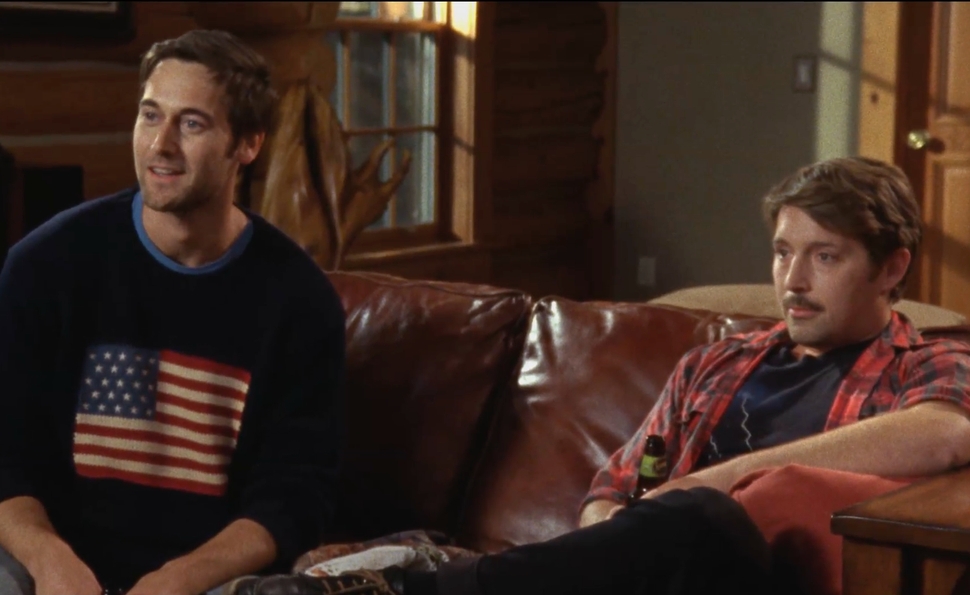 Nostalgia can be tricky, in life and in art. If unquestioned, it can be a sentimentalized view of the messy past. It can be a sincere longing for the good things in the rearview mirror, but it can also be used to check out of the present. Beside Still Waters, a first feature by Chris Lowell (who co-scripted with Mohit Narang), is all about nostalgia, even down to the fact that it was filmed on 16mm, interspersed with Super-8 footage and beautiful black-and-white photographs of the characters’ collective past. Shooting on film in the digital age is its own nod to the past. And while the film has some clunky exposition, and a couple of predictable moments, it creates a real sense of a group of friends who have known one another since high school, who don’t stand on ceremony, and who all, in various ways, struggle with nostalgia. Lowell shows great sensitivity in creating that collective mood, and expressing it through a large, diverse ensemble.

Daniel (Ryan Eggold) recently lost his parents in a car accident. The family lake house where he and his sprawling group of high-school friends gather every summer has gone into foreclosure. Daniel was working on his dissertation about the “lost generation” when the tragedy of his parents’ death befell him. He goes into reveries about Ernest Hemingway. The losses he has withstood are too much to bear, exacerbated by the fact that none of his high-school friends even attended his parents’ funeral. When the friends hear Daniel is losing the house, they come from far and wide to gather one last time. Characters are introduced in broad strokes, “performing” their personalities upon entering the scene. At first, the banter feels forced, and everyone seems like they’re acting to type. But they loosen up as the film moves along, and the film comes alive in the small details of their interactions.

There’s James (Brett Dalton), an actor, currently appearing on a horrible reality-TV series, trying to tell himself and his friends that it’s a valid career move. Tom (Beck Bennett) is a deadpan over-it guy who was just fired from his father’s law firm. Martin (Will Brill) and Abby (Erin Darke) were high-school sweethearts, now married. They lost their virginity to each other in the lake house, a stark contrast to their current sexless, exasperated relationship. Charley (Jessy Hodges) is as wild as she was in high school, and hoping to hook up with James for old time’s sake. A surprise guest shows up, Daniel’s ex-girlfriend Olivia (Britt Lower), with her new fiancé Henry (Reid Scott) in tow.

Olivia’s arrival throws Daniel into a tailspin of self-pitying nostalgia, and Henry is blindsided by Daniel’s unfriendliness. Copious amounts of alcohol and weed remove the inhibitions, at which point Beside Still Waters takes off. There’s an extended Super-8 montage of board and card games, dancing, doing shots, and whooping it up, and it all feels real. Super-8 can be an empty home-movie gimmick, but here, it actually creates the required joyful, bittersweet mood.

Lowell inserts quick, flashing images of black-and-white photos into the action, shots of all the characters at the lake house in summers past. Sometimes, in the middle of a scene, Lowell will present a series of images from within the house—the dining-room table, the view of the lake from the porch, the old childhood drawings tacked up on the wall, the objects on the dressers. In those sequences, a contemplative stillness expands. Anyone who has ever said goodbye to a beloved house, with a lot of personal history, will understand those moments.

And there are some wonderfully edited sequences, especially a morning-after scene where the hungover characters hole up in smaller groups, trying to hash out what the hell happened the night before. The scenes take place in separate locations, but the language is looped together, and the conversations all start to echo and answer one another. The “ba-dum-ching” quality is extremely difficult to pull off, and Lowell executes it flawlessly.

These characters are all pushing 30. They have miserable jobs, or no jobs, they don’t have enough sex, and their parents have started to die. Mortality beckons. Nobody is prepared. Living in the past is attractive, but not sustainable long-term. Beside Still Waters doesn’t sentimentalize its friendships—the characters are all pretty rough on each other—and yet there’s a sense that something solid is at their core. Maybe the friendships are ephemeral, like those fragmented glimpses of Super-8 footage. But as another member of the lost generation famously wrote, from the midst of his own waste land, “These fragments I have shored against my ruins.” That’s what the film is ultimately about.