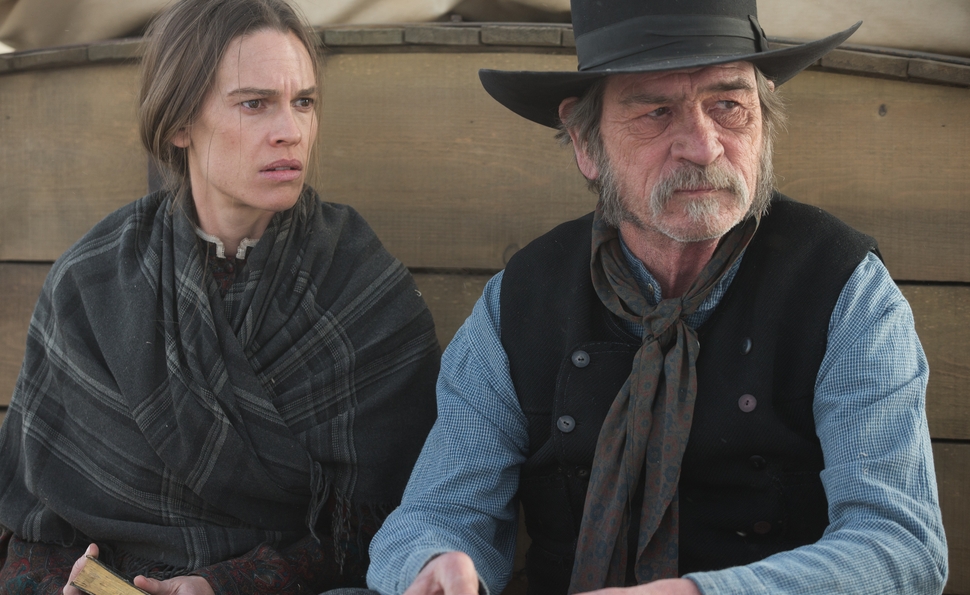 Though The Homesman’s title refers to a man, and the film was written and directed by men, it’s primarily about women, in ways both fascinating and frustrating. At times, this unconventional Western verges on becoming one of the angriest feminist statements in recent memory—not necessarily an expected move for Tommy Lee Jones, whose previous directorial project, The Three Burials Of Melquiades Estrada, was significantly more macho. Jones’ title character only steps forward to become The Homesman’s protagonist in its final stretch, and even then, he’s mostly an avenging angel. All the same, there’s a wishy-washiness to the film’s ideological bent that keeps steering things in a more conventional direction, as if Jones (or perhaps Glendon Swarthout, who wrote the source novel) were afraid to take this risky material all the way. It’s a decidedly bumpy ride to an odd destination.

The year is 1855, and much of the American Midwest still consists of territories not yet officially designated as states. Somewhere near what will become Nebraska (in 1867), a middle-aged farmer named Mary Bee Cuddy (Hilary Swank) has just failed yet again in her attempt to secure a husband, which she views as a business proposition rather than as a grand romantic gesture. Men find her both too homely and too bossy, and this latest rejection has her so disgusted with her lot in life that she volunteers to transport three mentally deranged women (Miranda Otto, Grace Gummer, and Sonja Richter) to the relatively new state of Iowa, where they can be properly treated. Unable to make the arduous trip alone, she more or less blackmails a grizzled claim-jumper named George Briggs (Jones) into accompanying her, after finding him left astride a horse underneath a tree with a noose around his neck. Together, they slowly make their way east—even the geographical direction seems pointed, given the genre—and develop a grudging bond as they encounter threats and setbacks both expected and entirely unexpected.

In many respects, The Homesman plays like a standard buddy movie. Mary Bee is pious and uptight; George is vulgar and mercenary. Somehow, these two contrary personalities must learn to cooperate. But the context in which they’ve been placed speaks much more strongly to her circumstances than to his. For one thing, it isn’t clear what’s wrong with the three women they’re transporting—no epidemic is ever mentioned, and flashbacks to the onset of each one’s illness strongly suggests that going mad is the natural outcome of being female in that time and place. Even more radical, however, is the truly startling narrative development that occurs about two-thirds of the way through the film, which seems to arrive out of nowhere even as it retroactively makes perfect sense. The sudden fissure threatens to destabilize The Homesman in the best possible way. A subsequent scene involving James Spader as a politely obnoxious hotel manager is thrilling in its implication that the film has essentially gone rogue.

Alas, it doesn’t last. Order is restored not long after this bold, nervy move, in a tidy epilogue featuring quick cameos from Hailee Steinfeld and Meryl Streep, and The Homesman concludes in a way that equates Mary Bee and George, making them kindred spirits. What briefly looks like a real earth-scorcher turns to be a buddy movie after all, and its despairing observations about women on the frontier wind up being transferred to its only significant man. That feels not just misguided, but almost like a betrayal, though it’s entirely possible that Jones (and his co-screenwriters, Kieran Fitzgerald and Wesley A. Oliver) heightened what was only a marginal aspect of Swarthout’s novel. Either way, seeing a movie come so close to being exceptional before retreating to safer ground is a major disappointment.