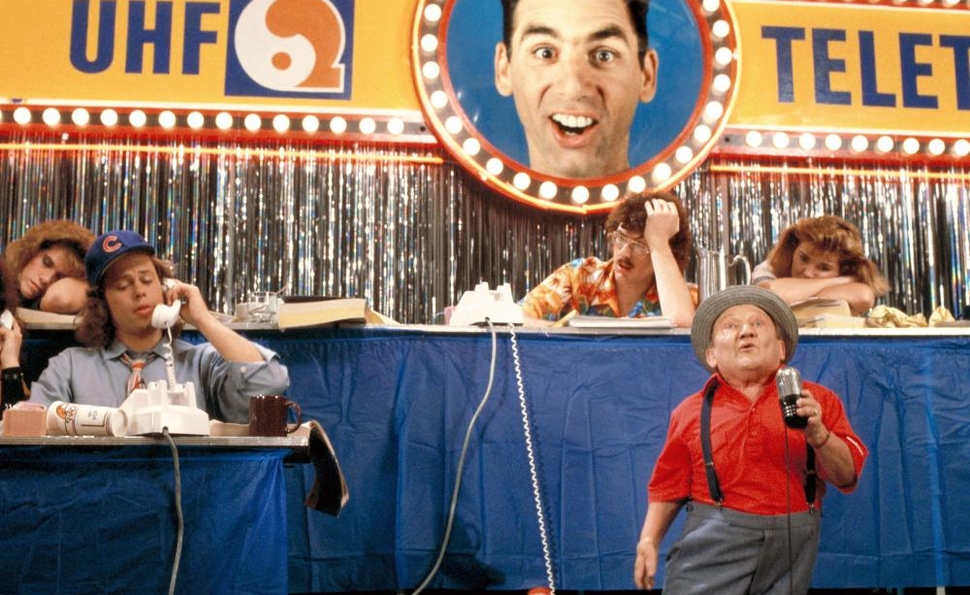 “Weird Al” Yankovic is a parodist, not a satirist. When he turns Michael Jackson’s “Bad” into “Fat,” or Iggy Azalea’s “Fancy” into “Handy,” he isn’t critiquing or exposing anything about those songs. He’s taking something popular and making it sillier—the way lots of people do, when they’re kidding around with friends, or humming to themselves around the house. In 1989, Yankovic co-wrote the movie UHF with his manager Jay Levey, who also directed. UHF parodies the cheap local programming that used to fill up the non-network broadcast channels, and it takes a few shots at blockbuster movies like Rambo and Close Encounters Of The Third Kind, too. But UHF doesn’t have any more of a point than Yankovic’s music does, beyond just proving that any movie, TV show, pop song, or cultural trend, big or small, can be made to look ridiculous—and thus less imposing to everyone on the outside of what’s popular. UHF has become a cult favorite for much the same reason a lot of people love Yankovic’s music: It’s agreeably goofy, and it feels like something anyone could do, even if that’s not the case.

In UHF, Yankovic plays George Newman, a perpetually unemployed daydreamer whose wheeler-dealer uncle hires him to manage the low-rated UHF channel 62. Determined to move away from syndicated sitcom repeats and generate more original programming, George launches a morning children’s show, and strikes gold when he turns it over to his dimwitted, free-associating janitor, Stanley Spadowski (Michael Richards). The popularity of Stanley Spadowski’s Clubhouse encourages George to throw even more bizarreness on the air, from Wheel Of Fish to Bowling For Burgers. Soon, Channel 62 is so popular that one of the network affiliates, Channel 8, tries to buy it up and shut it down, forcing George to hold a telethon to raise the money he needs to save the station.

UHF was shot in Tulsa on a relatively low budget, with nobody involved in the project in the early going—not even Yankovic and Levey—expecting much from it. Yankovic himself has said he didn’t take UHF too seriously, and just used its slim story as an excuse to load the movie with loosely connected sketches, aiming for something akin to 1970s midnight-movie favorites like The Groove Tube and The Kentucky Fried Movie. But when UHF scored unusually high with test audiences, Orion Pictures decided it had a sleeper summer hit on its hands, so the company released it in the same summer as Batman, Lethal Weapon 2, and Indiana Jones And The Last Crusade. UHF got crushed, and didn’t start finding an audience until after it hit home video—which is more like what Yankovic had in mind.

In retrospect, it’s hard to believe that UHF tested so well. The movie has no sense of pace, the parodies are often obvious and unfunny, and Yankovic’s performance ranges from shrieking to inert. Plus, UHF suffers a flaw that’s plagued Yankovic throughout his career. Whenever someone like Joe Dante or Joel Hodgson riffs on old B-movies and other pieces of pop trash, the spoofery is usually referred to as “loving.” But that’s never really been the case with Yankovic. He isn’t mean, which is refreshing, and he does pay close attention to what he’s parodying. But loving? Not exactly. There’s always been too much distance between the joke and its target in Yankovic’s work. He rarely gives the impression that he’d be spending his days listening to Top 40 or watching kitschy TV shows if he weren’t mining them for his act.

So why is UHF enjoyable anyway? Mainly because it’s representative of the community that spawned Yankovic: the world of local DJs, stand-up comedians, and harmless oddballs who found an outlet every week on Dr. Demento’s syndicated radio show. The movie has a little gentle weirdness, like when Yankovic sings the Beverly Hillbillies theme to the tune of Dire Straits’ “Money For Nothing.” It also has moments that are more deeply strange, mostly related to Richards’ cartoonish, anarchic take on Stanley Spadowski. And then at the end, when George is selling shares in Channel 62 to the viewers to keep it alive, UHF expresses a touching faith in fandom. Yankovic is well-liked because what he does is familiar: singing little songs that playfully rip off other songs. But he’s also become a hero to many because he’s never stopped seeing himself in all the geeky daydreamers who buy his music.

Shout! Factory’s 25th-anniversary Blu-ray edition of UHF is loaded with extras, including a vintage behind-the-scenes featurette, nearly 20 minutes of rapidly chopped-together outtakes, and the entirety of this past summer’s Comic-Con “Weird Al” panel, which served as a kind of extended bow-taking after Yankovic notched his first Billboard No. 1 album. The most significant extra is a Yankovic/Levey commentary track, which mostly consists of Yankovic reading the cast and crew’s IMDB credits, between making self-deprecating remarks about his acting ability and pointing out the facial moles he had removed in the middle of the shoot.