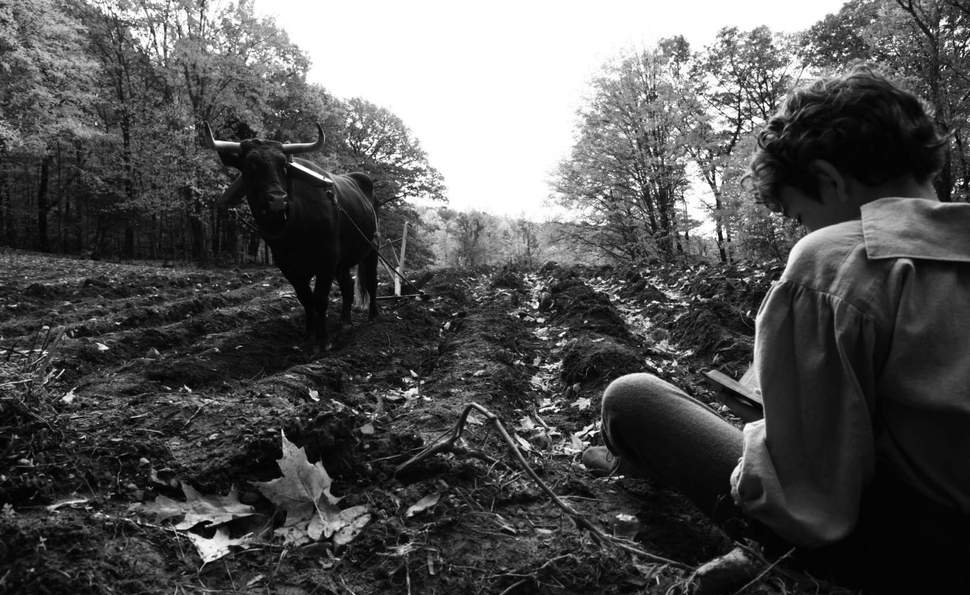 It would be disingenuous to deny the influence of Terrence Malick on A.J. Edwards’ unusual, lyrical “Abraham Lincoln as a boy” biopic The Better Angels. Malick is one of the film’s producers, and Edwards worked closely with Malick as an editor and assistant on The New World, The Tree Of Life, and To The Wonder. Judging by The Better Angels’ whispery voiceover narration and its arrestingly intimate shots of people interacting with nature, Edwards has been deeply affected—some might even say infected—by his mentor. The big question is: Do the undeniably Malick-derived qualities of The Better Angels work against it, or is the film all the more special for being, essentially, a bonus Malick picture?

To be fair to Edwards, a lot about The Better Angels sets it apart from Malick. It was shot in sumptuous black and white by cinematographer Matthew J. Lloyd, which is a significant stylistic departure, since it adds a layer of historical distance. Edwards and Lloyd aim for immediacy in The Better Angels’ framing and lighting, transporting the audience to the forested Indiana hills of the late 1810s, where a grade-school-aged Abe (played by Braydon Denney) lives in a cabin with his gruff father (Jason Clarke) and his sweet-natured mother (Brit Marling). But the black-and-white imagery makes The Better Angels feel just a little dreamier, like a story from a crumbling old picture-book. The narration also helps create a reflective mood, since it’s presented as the voice of one of Lincoln’s cousins, looking back and giving his own impressions of the future president. Everything in the film is meant to show how Lincoln was led to a life of education and empathy.

The nature of the narration—more direct than the stream-of-consciousness approach of Malick’s later work—is another way The Better Angels is distinct from the poetic history-plays of The Thin Red Line and The New World. Edwards’ film is arty, but it’s not “difficult,” per se. Between the sun-dappled shots of the Lincoln family scampering idly through the grass, and the perfectly composed close-ups of icy streams, The Better Angels threads together formative incidents from Lincoln’s childhood. Edwards shows Lincoln’s mother dying from poisoned milk, and his father leaving the children alone through a harsh winter while he rides off to find them a new mother (Diane Kruger). The movie’s central conflict is clear and compelling, as Abe soaks up the encouragement from the women in his life—and from an attentive teacher played by Wes Bentley—while flinching from a father who mistakes Abe’s studiousness for snobbiness and laziness. To extend the literary analogy, as The Better Angels plays out, it becomes an abstracted version of one of Laura Ingalls Wilder’s novels about the rewards and hardships of life on the frontier. Though quiet and slow, this film flows like a brook.

The real value of The Better Angels is in how Edwards and his cast and crew re-create the look and feel of life in the woods in the early 19th century, which could be edenic when nature was kind, and hellish when the weather turned or disease crept in. Early on, the narrator describes Lincoln’s early life as “cussin’, quarrelsome days,” with “so little time to sing or talk about the glory.” Edwards shows exactly what that means. The movie dwells on how much time and hard work it takes to chop down a tree, or work a loom. And when winter arrives, the Lincolns’ cabin looks both forbidding and beautiful, with snowdrifts by the walls and icicle chandeliers. Even more than the basic structure and tone of The Better Angels, it’s indebted to Malick for its rich visual texture. Nothing creates the feeling of peering into the past better than a shot of steaming hot stew, ladled into crude wooden bowls, in front of a crackling fire in a dimly lit, hand-built house. Those kinds of clear, compelling visions of the way things used to be are such a rare gift that it doesn’t matter if they’ve been borrowed from someone else.