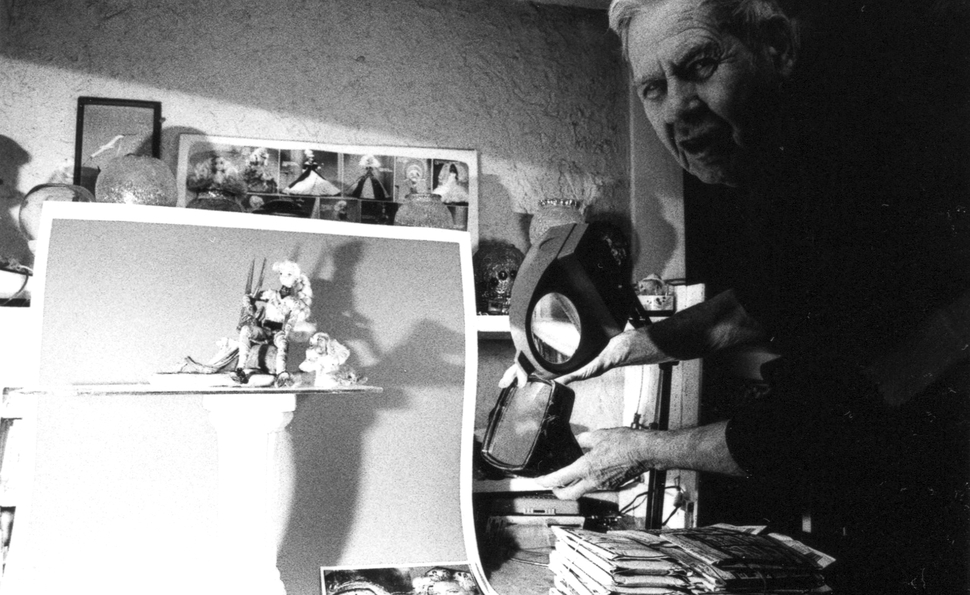 The latest addition to a surge in documentaries about outsider artists (Finding Vivian Maier, In The Realms Of The Unreal, Marwencol), Magical Universe tells the story of an elderly Maine widower named Al Carbee, who whiled away his hours in retirement creating and photographing dioramas populated by Barbie dolls. That in itself isn’t so remarkable—people have been using Barbies in art for decades, with the most notable instance being Todd Haynes’ 43-minute “Superstar: The Karen Carpenter Story.” But Carbee, like most of the subjects of these films, was also a world-class eccentric whose obsessions seem to straddle the line between creativity and madness. Peering into such lives often involves a fair amount of queasy voyeurism, especially when the person is deceased and unaware of how they’re being represented. In this case, Carbee (who died in 2005) is such a benign, downright lovable presence, and so obviously tickled by the attention, that the film doesn’t seem at all exploitative. That also makes it a tad dull, though.

Narrated in the first person by director Jeremy Workman, son of Oscar-montage fixture Chuck Workman, Magical Universe begins with a chance meeting while Jeremy and his girlfriend, Astrid, were vacationing in Maine. Originally, this led only to a five-minute short called “Carbee’s Barbies,” which played a few tiny festivals, then disappeared from view. Carbee, however, was so excited about having met Jeremy and Astrid (whom he called a “human Barbie”) that he began writing them letters. Hundreds of letters. Each of which looks disturbingly like the contents of John Doe’s notebooks in Seven, and most of which feature references to an imaginary world called Epicuma. Eventually, Carbee bought himself an ancient camcorder and began sending Jeremy and Astrid dozens of six-hour VHS tapes, which alternated between his own ramblings to the lens and random stuff he videotaped off TV. Meanwhile, he was self-distributing his own copies of “Carbee’s Barbies,” literally handing them out to total strangers on the street, which led to his finally landing an exhibition of his work at age 89.

For a while, Magical Universe seems as if it’s building toward something pretty dramatic, as Carbee’s list of eccentricities grows more and more outlandish. Workman interviews the local reporter who originally discovered Carbee’s art (after Carbee called asking to be profiled), and the guy tells a long, utterly riveting tale of wandering through the labyrinth of Carbee’s house, finding Barbies and guppies (which Carbee bred and sold) everywhere he looked. He describes being taken down to the basement—with some trepidation, though he decided he could take Carbee in a struggle if it came to that—and seeing little of interest until Carbee urged him to open a small closet door, which led to a studio the size of a barn. The word “Narnia” is invoked. Curious to see this? Stay curious, because it isn’t in the movie—the property has been demolished. For whatever reason, over the years Workman was friends with Carbee, he never shot the interior of Carbee’s house, only a tiny sliver of which appears in “Carbee’s Barbies.”

At one point, midway through the film, Workman unexpectedly cuts to a shot of Astrid watching the previous scene from Magical Universe (then presumably a work-in-progress) on their TV set, and she chastises him for making Carbee seem weirder than he really is. This behind-the-scenes interlude amounts to a sort of confession/disclaimer, as nothing terribly arresting happens thereafter. Carbee gets his show, which is nice (and there’s an amusing interview with a museum employee who reveals that he showed up at his own exhibit every single day for weeks, bringing in newly created work), but the captivating air of mystery and intrigue has leaked away by then. While the film runs only 77 minutes, that’s a good half an hour longer than the material can support, even though Workman shot it over roughly a decade. Carbee was really just a mildly nutty, very lonely old man who desperately craved human contact, to the point where he repeatedly wishes aloud that his Barbies would come to life. A feature about him needed someone more visionary, who might have run with that idea, rather than the workmanlike Workman, who merely observes and assembles.