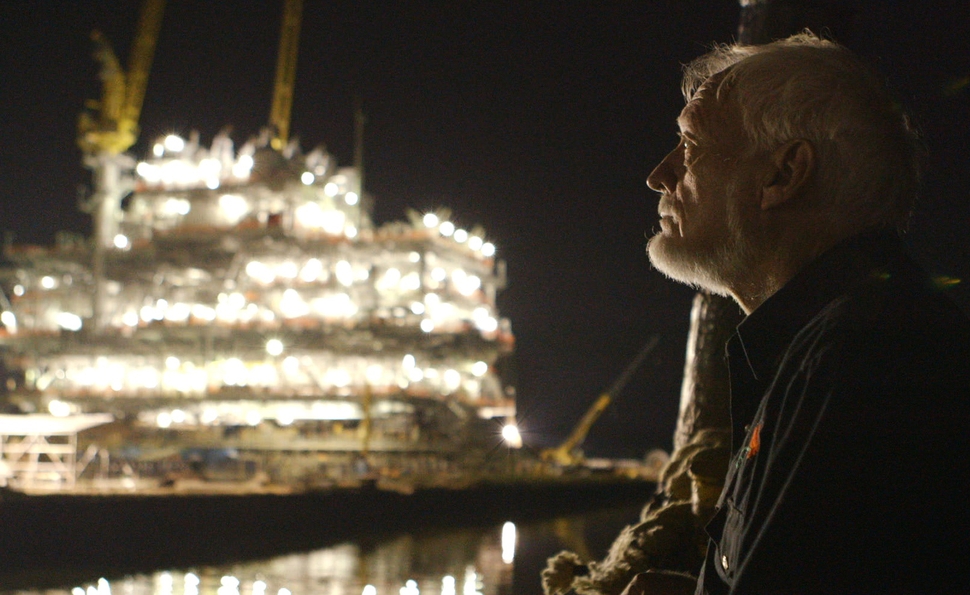 The economic and environmental devastation wrought by the Deepwater Horizon oil spill in 2010 didn’t end when the well was finally sealed, ending an 87-day gusher that pumped an estimated 210 million gallons of sludge into the Gulf Of Mexico. But coverage of the spill tapered off as the media moved on to the next crisis, and any further reports about its impact on marine and wildlife populations, local fishing and tourist industries, the status of compensation funds and civil lawsuits, and the practice of offshore oil drilling in general haven’t been the subject of national attention. If nothing else, Margaret Brown’s SXSW Grand Jury Award-winning documentary The Great Invisible offers a comprehensive survey on all the above, from a postmortem on the circumstances that led to the Deepwater Horizon’s explosion to on-the-ground profiles of fishermen and oyster shuckers who continue to feel the effects. But the film’s broadness of scope is also its biggest liability: The Great Invisible has enough material for five or six documentaries, suggesting the sprawl of something like Spike Lee’s four-hour, four-act When The Levees Broke. At 94 minutes, it’s too little on too much.

The most damning revelations come from Brown’s investigation of the explosion itself, which she casts as a shameful consequence of corporate greed and cost-cutting. Given the depths that Deepwater Horizon could tap, the rig was state-of-the-art, and the surviving crew members Brown interviewed say the workers on board were exceptionally skilled. But as the costs of deploying the rig started to rise, the oil giant BP and its lease owner, Transocean, started laying people off, confident that the equipment on the new rig wouldn’t break down. That negligence, on top of other shortcuts in safety practices, put the Deepwater Horizon in jeopardy, eventually resulting in an explosion that killed 11 men and unleashed a gusher the company didn’t know how to cap. In light of that, the spectacle of watching executives from the major oil companies testifying before Congress, each working from the same thinly sketched disaster plan, is a sickening charade.

Brown covers the macro issues of the Deepwater Horizon case and the $20 billion compensation fund managed by Kenneth Feinberg, but she also delves into the consequences for individuals who live on the coastline. In Bayou La Batre, Alabama, a town built around its seafood supply, the polluted waters have devastated the oyster population, driving the already-poor residents into destitution. The one note of positivity comes from Roosevelt Harris, a high-spirited food-bank volunteer who cooks meals and distributes boxes of supplies to those in need. She also visits Morgan City, Louisiana, where the shipyards that supply the offshore oil industry were devastated by President Obama’s moratorium on new leases.

On this last point, Brown uncovers the painful compromises of our dependence on oil: When a rig like the Deepwater Horizon poisons the sea, the impact on the ecosystem and the local seafood and tourist industries is destructive, but many people depend on offshore drilling to make a living, and beyond that, a country that relies on cheap gasoline and isn’t in a hurry to come up with energy alternatives. For all the outrage Obama expressed on behalf of the country as the disaster unfolded, he could not afford to stand against the oil industry too vociferously, because the political consequences would be severe.

The Great Invisible itself isn’t mired in such ambiguities. When Brown gathers a quartet of cigar-puffing oil traders to discuss the business, the scenes are contrived and false, featuring a bunch of know-it-all fat cats whose pragmatism can’t mask their greed. The film also supplies a wealth of alarming facts in titles, and even a website for those who want to take action to protect oil-rig whistle-blowers, donate to Bayou recovery funds, or spread the word on “hidden oil.” The film is righteous but propagandistic, gearing its considerable insight into the Deepwater disaster and its aftermath into a narrow, prodding call to arms. For a documentary wide-ranging to the point of being diffuse, the last-ditch rallying cry seems entirely out of place. It undermines its own complexity.