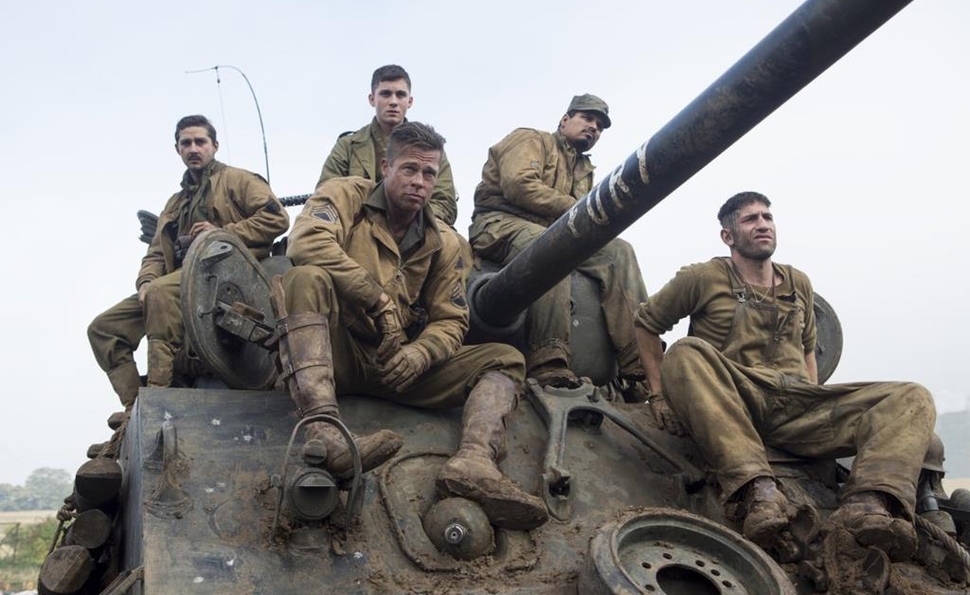 David Ayer’s brutal new World War II movie Fury begins with the war nearly over, but that’s cold consolation for the bleary survivors who man a shambling rust-bucket of a Sherman tank named “Fury” in casualty-strewn Germany. These exhausted men don’t need to wait for the war to be over to experience intense cases of Post-Traumatic Stress Disorder. They wear the haunted, defeated expressions of men who have been at war far too long, and have seemingly forgotten anything not directly related to the life-or-death struggle for survival that constitutes their everyday existence.

Writer-director Ayer specializes in tough, unsentimental movies about societies of violent men trying to live by unwritten codes of ethics, a theme that reappears in his scripts for U-571, Training Day, The Fast And The Furious, Dark Blue, Harsh Times, and End Of Watch. For Ayer, there’s no romance in warfare, only endless brutality, and Fury is deeply immersed in a visceral realm of blood, piss, and vomit.

Looking suspiciously like his Inglourious Basterds character, Brad Pitt leads the cast as the tank’s commander, Don “Wardaddy” Collier, a tough but principled man who attempts to maintain some level of civility while many of his men have devolved into animalistic states. Shia LaBeouf co-stars as Boyd Swan, the tank’s resident Bible-thumper (his nickname is even “Bible”), and the men who round out the tank’s crew similarly fit snugly into World War II stereotypes. There’s the vaguely Neanderthal-looking Jon Bernthal as Grady “Coon-Ass” Travis, a wily hillbilly with a vicious mean streak; Michael Peña as the token minority; and Logan Lerman as Norman “Cobb” Ellison, another stock character, the fresh-faced private whose innocence dies in combat.

The haunted men who control Fury really do feel like they’ve been fighting together for years inside the claustrophobic, soul-shredding confines of a tank. There, communication is often non-verbal, though they’ve also clearly cultivated a dense web of running jokes and insults that help them pass the time, making life just barely tolerable. Fighting so intimately for so long has forced them to bond, while simultaneously instilling them with a desire to never see any of their fellow soldiers again.

Fury has an exhausted, lived-in quality that’s one of its greatest strengths, along with action sequences that have the graphic, immersive, and brutal intensity that at best recalls the Normandy sequence of Saving Private Ryan. But the film’s aspirations to realism often clash with its reliance on war-movie clichés. The film’s climax, meanwhile, abandons realism entirely, as the devastated crew seemingly takes on the entire German army with a single rusty, immobile tank. Fury lives up to its title with its great ferocity, but at a certain point, it begins to feel like a macho fantasy.