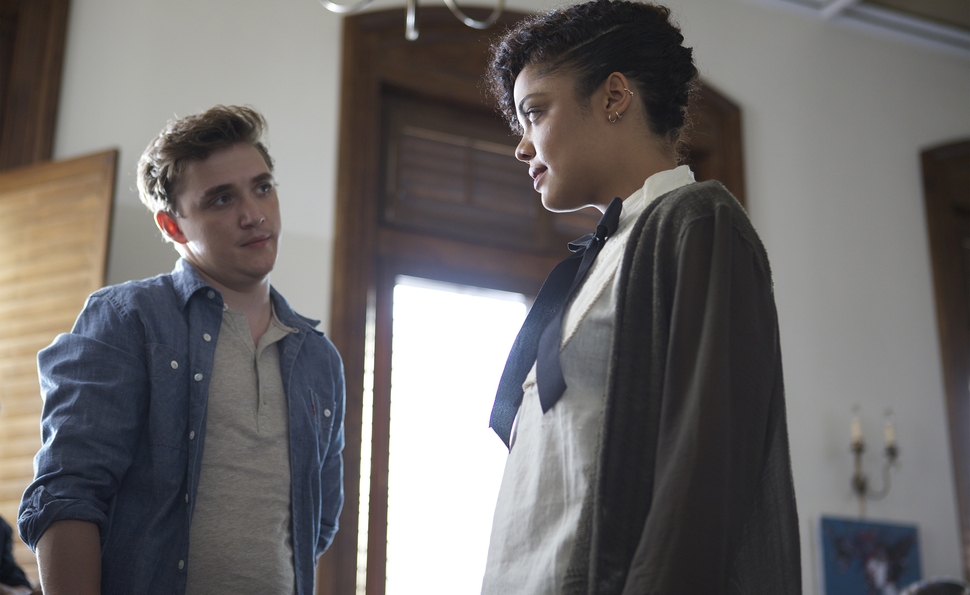 Throughout Justin Simien’s writer-director debut Dear White People, an activist college student named Sam (played by Tessa Thompson) gets behind the microphone at the campus radio station to deliver mini-lectures on the subtle, pervasive racism of life in these United States. “Dear white people,” Sam begins, before talking about the myriad ways Caucasians try to appropriate or condescend to black culture, from the way they use words like “thang” to the way an acquaintance of hers is dating a black guy as an apparent act of social rebellion. And then she carries that needle into her classwork, making a film-class project called “Rebirth Of A Nation,” with actors in whiteface howling about President Obama.

It’s been a while since a movie comedy dealt as directly and smartly with questions  of racial identity as Dear White People does. The most obvious precedent for Simien’s attack here is what Spike Lee did with his early films, where Lee frequently detoured from the plot to have black and white characters talk to each other (or among themselves) about racial differences, giving all the arguments a fair hearing. Dear White People especially recalls Lee’s School Daze, both because it’s set on a college campus and because it’s not just about black against white, but about the divisions within the African-American community.

Dear White People follows a handful of black students at the fictional Ivy League college Winchester University, which is preparing to take away students’ rights to choose their own dormitories—a measure the Dean (Dennis Haysbert) and his BMOC son Troy (Brandon P. Bell) see as progressive desegregation, but that Sam sees as a way to scatter and marginalize Winchester’s black undergrads, who mostly gather in a single traditionally black dorm. Meanwhile, Sam’s bomb-throwing public persona (which masks both a troubled home life and a secret love of white-girl pop) has prompted two of her classmates to push back. Coco (Teyonah Paris) has plans to become a reality-TV star by steering into the curve, playing up the stereotype of the sassy black girlfriend in a series of web videos. Kurt (Kyle Gallner), the white boss of a Harvard Lampoon-like satirical campus publication, plans to send up the whole idea of “black identity” by throwing a party where everyone dresses up as characters from rap videos.

The most fascinating character in Dear White People, though, is Lionel (Tyler James Williams, a.k.a. “Chris” from the sitcom Everybody Hates Chris). A gay, shy writer with a shaggy afro, Lionel has no affiliation with any particular group—“The worst thing about high school was the black kids,” he mutters when asked why he’s not a member of any of the African-American organizations on campus—which ends up making him the perfect person to go undercover for the school paper and report on the growing racial tension at Winchester. Lionel is stuck in the middle of all the arguments for and against desegregation. He’d prefer to self-identify as “Lionel,” but he also has firsthand experience of being treated as a token in Winchester’s predominately white circles.

Because Dear White People is such an anomaly in today’s indie film scene, it’s tempting to give it more credit than it deserves. Simien is clearly a talented, witty writer, with a fantastic sense of character development and dialogue, but he makes a lot of rookie mistakes as a filmmaker, from trying to cover too much ground in one movie to making stylistic choices that render Dear White People visually incomprehensible. Kudos to Simien for showing some ambition in both his script and in where he put the camera, but the fundamental logistics of any given scene in Dear White People—where the characters are in the story, and even where they are in relation to each other in a room—are frequently hard to follow.

That said, the smartest move Simien makes with Dear White People is in following Spike Lee’s dialectical model. As muddled as the movie is, it’s also bracingly confrontational, and not in a hectoring way. With the exception of the proud asshole Kurt (who is at least honest about his awfulness), nearly everyone in Dear White People gets the benefit of the doubt, and gets to talk through the pressures of being African-American at a prestigious university, where full assimilation seems to be the ultimate outcome for everyone. Dear White People is about fighting for some kind of middle ground between a black monoculture and blending into the background of white corporate America. “We live in a world where there’s a Big Momma’s House 3,” Sam sighs at one point. Simien means to make sure that this world also contains a Dear White People.