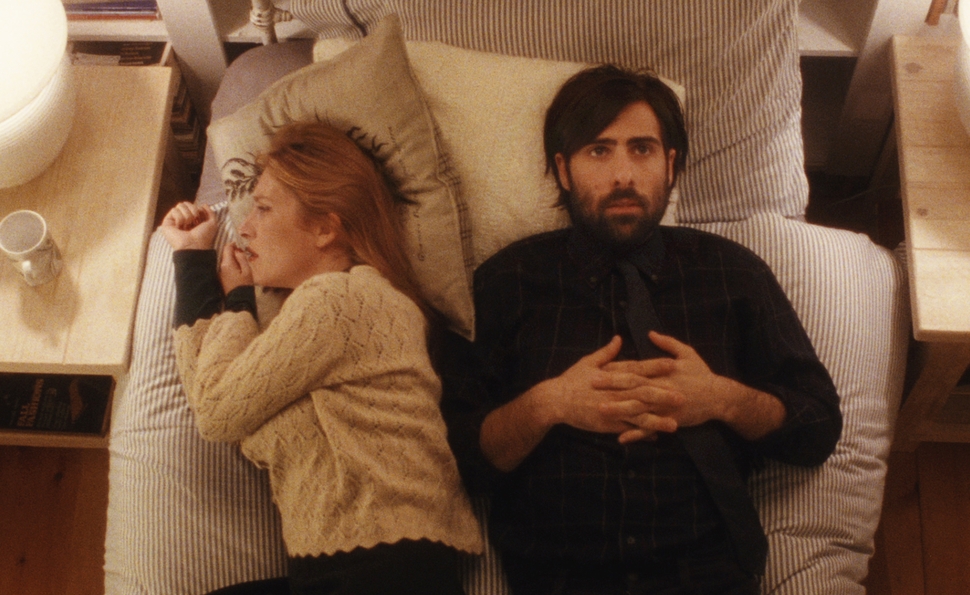 Alex Ross Perry’s Listen Up Philip takes the familiar, tweedy form of the New York literary comedy: Allusive and witty, flush with the follies of authors and intellectuals, and narrated in third-person omniscient, as if it were a novel being dictated for the screen. Woody Allen, Whit Stillman, Noah Baumbach, Wes Anderson: This is their territory, and quite possibly their sweaters, too. And yet Listen Up Philip, from first scene to last, somehow both honors and continues that tradition while burning the whole establishment to the ground. In its unsparing, almost anthropological dissection of a specific type—the self-loathing, narcissistic East Coast man of letters—the film is a reminder of how much those filmmakers, even the Baumbach of Greenberg or Margot At The Wedding, attempt to ingratiate themselves to the audience. Perry doesn’t care to make his hero cute or conventionally redeemable in any way, and he doesn’t turn away from the emotional wreckage he leaves in his wake. It’s one of the film’s many small miracles that it can be this harsh while extending a true generosity to its characters.

Without so much as a glimpse at happier times, the film opens with Philip Lewis Friedman (Jason Schwartzman) reaching a point in his life where his talent has manifested via a monstrous sense of entitlement and contempt. No longer will he bottle up frustrations both petty and pertinent: He blasts his ex-girlfriend for being late for lunch. He tells the publishers of his second novel—christened with the sales-resistant title Obidant—that he’s decided not to do any interviews or publicity for the book, in a petulant bid to heighten his own mystique. He alienates the one journalist who wants to write a magazine profile on him by forcing him into a Norman Mailer-esque test of his machismo. And when his literary hero, Ike Zimmerman (Jonathan Pryce)—an ornery, Philip Roth-like lion in winter—offers Philip a chance to live and write in his country retreat upstate, Philip doesn’t think twice about leaving his photographer girlfriend Ashley (Elisabeth Moss) alone in their apartment indefinitely.

As Philip settles into his new life with Ike, who encourages his protégé in ways that are both fatherly and vampiric, Perry continues to add more characters and narrative strands into the mix. The always-brilliant Krysten Ritter turns up as Ike’s semi-estranged daughter, whose thoughts of reconciling with her distant father dissipate into mutual disdain almost immediately. And Ike gets Philip a teaching job at a small liberal-arts college, where he’s isolated by his inexperience, his prickliness, and the marshaling of staff members against him. Time passes abruptly, often by months and years, with little but Eric Bogosian’s narration to fill in the gaps. In that same literary spirit, Perry allows himself the freedom to change structure and perspective without announcement, and pursue some fresh and unexpected insight.

For Perry and his supporting characters—to say nothing of the audience—a little time away from Philip is a chance to breathe. Once Philip moves upstate, leaving Ashley behind, it’s tempting to think about her as a piece of emotional wreckage, the prime victim of his narcissism and abuse. But Perry doesn’t leave her in the rearview like Philip does; he spends time with her as she copes with the end of the relationship and tries to get her life back in order before his inevitable reappearance. In a single, remarkable close-up, their entire romanic history and its fallout register on Moss’ face like the changing of the seasons in stop-motion. It’s a full spectrum of mixed emotions.

Listen Up Philip is equally sharp about Ike, though much tougher in its assessment of the older author’s self-serving paternalism toward Philip. It’s easy enough to see in Ike the man Philip will eventually become; had Wonder Boys not already used Neil Young’s “Old Man” as an on-the-nose music cue to its own relationship between a long-in-the-tooth novelist and his young charge, it would apply here, too. But again, Perry doesn’t settle for the obvious insight: Ike uses Philip’s energy to jumpstart his own floundering career—and to impress much younger women at parties—and in return seems pleased to encourage his protégé’s worst habits, perhaps because misery loves company. And given a second woman victimized by a navel-gazing writer, Perry carves out time for Ike’s daughter, whom Ritter plays with heartbreaking resilience and enough bilious wit to suggest her father's influence.

In every way an advance on Perry’s previous feature, 2011’s similarly bracing The Color Wheel, Listen Up Philip feels rough-hewn where the last film felt rough around the edges. Perry hasn’t lost his impulse to provoke, or softened the brutal candor with which his characters speak to one another, but there’s a refinement in the acting, writing, and the complexities of structure and theme that belies its deliberately jagged edges. It’s a finely cut shard of glass, like Elaine May’s The Heartbreak Kid, Maurice Pialat’s We Won’t Grow Old Together (which Perry admires), or other such mercilessly frank assessments of human nature. Listen Up Philip doesn’t care to be liked. And in that, it deserves to be loved.